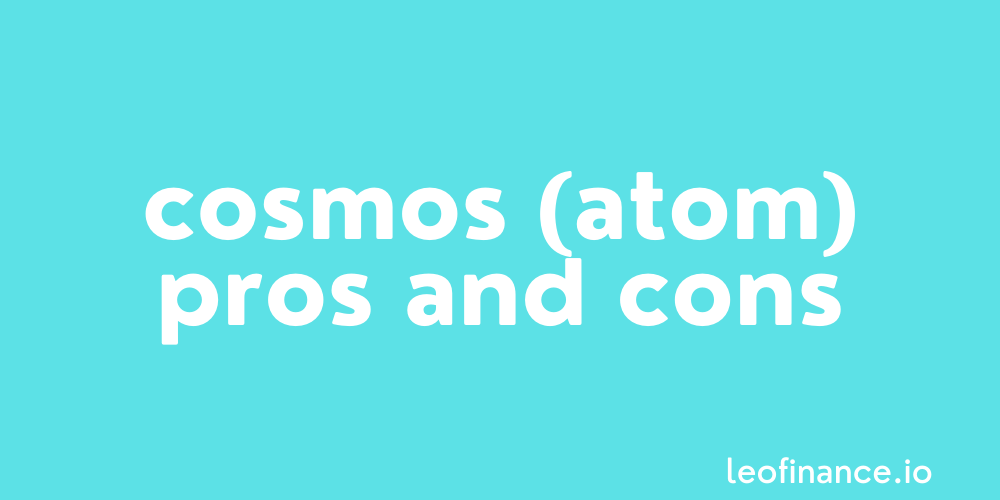 Before buying Cosmos (ATOM), take a look at this list of pros and cons.

The internet of blockchains project known as Cosmos (ATOM), has a number of pros and cons.

This section of our Cosmos (ATOM) guide takes a look at the pros and cons, before offering an opinion on which side is more overwhelming.

The 3 best things about the Cosmos blockchain and its native ATOM cryptocurrency are as follows:

1. The Cosmos project is fully open-source.

The framework that it uses to allow others to build multi-asset public Proof of Stake (POS) blockchains known as the Cosmos-SDK brings everything together.

What we end up with is a raft of seamlessly integrated blockchains that have no issues speaking to one another.

One of the biggest pros is that this doesn’t matter whether chains are Tendermint-based blockchains that have been created through Cosmos-SDK, or not.

Ultimately ensuring that blockchain standards through the Inter-blockchain communication protocol are adhered to.

Your independent work and sovereignty remains at all times.

All this, while taking advantage of the security and interoperability that being based on Cosmos affords.

Building on Cosmos can potentially offer new projects the best of both worlds.

3. Easier staking than DeFi on other chains.

The ATOM token can be easily staked to receive interest.

When it comes to ATOM in the case of the Cosmos Hub, staking is the process of locking up your coins to provide economic security for the blockchain.

As a reward for providing this service, you’re able to earn interest on your staked tokens.

Depending on which validators of the Cosmos Hub you choose, you’re looking at around 10%.

On the other hand, here’s a look at 2 of the negatives when it comes to Cosmos and the ATOM token:

1. Staked ATOM is locked away for a relatively long period.

If you choose to delegate your ATOM stake to earn interest, your tokens are frozen and therefore unable to be liquidated for any reason.

If you want to undelegate the ATOM tokens you have delegated to a validator, they will be subject to a 21 day lockup period.

This lockup perio is enforced by the network for added security, in order to prevent attacks being carried out against Cosmos.

2. Overwhelming competition in the space.

As we’ve already compared in this guide above, Polkadot is the biggest competitor to Cosmos and lightyears ahead when it comes to brand awareness.

Not to mention the fact that Cosmos is just one of a handful of competitors trying to eclipse Ethereum.

A blockchain that for all its flaws, continues to streak ahead of competitors with bigger brand names and more use-cases than Cosmos.

Do the pros of Cosmos (ATOM) outweigh the cons?

There’s just no denying the fact that the Cosmos blockchain has huge potential.

Not to mention the fact that lockup times on staked tokens serve a security function that we here on the Hive blockchain should understand better than anyone (shoutout to J-Sun!).

Hopefully, this section of our guide to Cosmos (ATOM) has put you one step closer to making a call on whether the project is for you.

Next we move onto the final section, helping you decide whethere ATOM is a good investment in 2021.

Why not leave a comment and share your thoughts on the pros and cons of Cosmos (ATOM) within the comments section below? All comments that add something to the discussion will be upvoted.

This Cosmos (ATOM) blog is exclusive to leofinance.io.