The Hyperdeflation Of Splinterlands: Why The Cards Are Exploding In Price 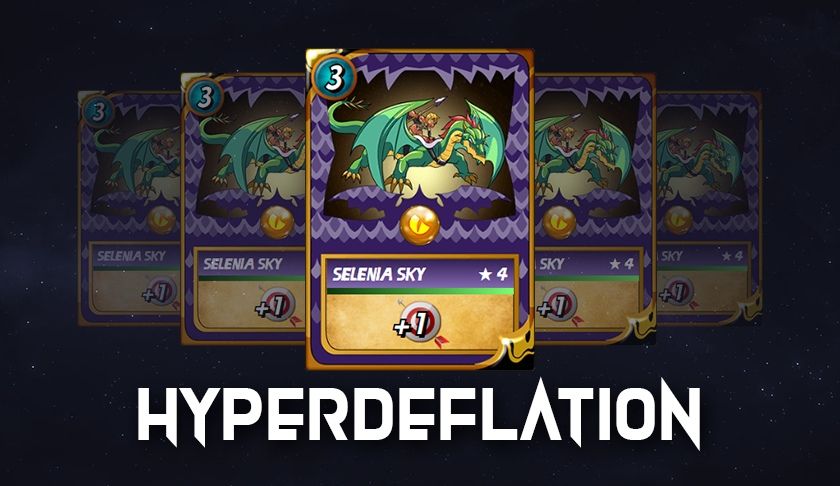 Splinterlands is a trading card game on the HIVE blockchain, that introduced the concept of the second layer to the wider community of users within this ecosystem. That was followed with the creation of Hive-Engine, a new exchange which allowed the creation and trading of tokens on that second layer of HIVE (actually all of that happened on the mother blockchain STEEM, hence the original name Steem Monsters and Steem-Engine, but this legacy is slowly fading out, considering our history with STEEM, Steemit, Justin Sun and the creation of the HIVE hardfork).

The Best Out Of Two Worlds 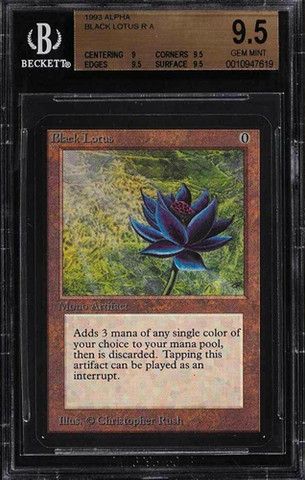 While Magic is famous for having some incredibly valuable cards, it is very impractical to play, to rent or to sell them, as the cards could be damaged, lost or stolen. It is also not entirely clear how many copies are left in circulation, as only the original print numbers are known but not how many people actually still own one.

Hearthstone or Pokemon Online on the other hand are entirely digital products, running on closed, centralized servers, with no insight how many copies exist of each card. Technically, each card is unlimited in supply and trading them is not an option anyway. You are even at risk to loose access to your collection or tournaments, as the Blitzchung controversy with a Hearthstone player has shown before.

Splinterlands takes the best out of both worlds by putting the game on the blockchain: true ownership of cards, collectability, rarity through limited supply, easy access to securely play, rent and trade of the assets. But there is more, a feature that many people don't know about and likely heavily underestimate when it comes to the true value of Splinterlands: you can combine the same cards to level them up and to create stronger versions.

To create the maximum level of a common Untamed edition card, you will need a whooping 400 BCX of cards (Base Card eXperience), for rare cards 115 BCX, for epic cards 46 BCX and for legendary cards 11 BCX. This means that only so and so many players/collectors can own a fully maxed version of each card. 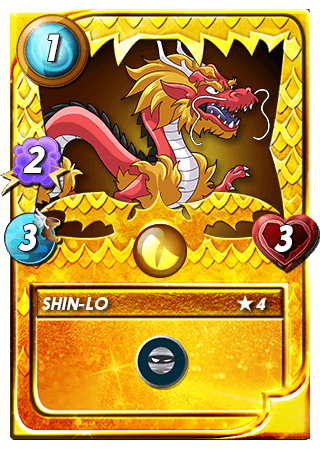 Then there are the super rare gold foil versions of cards, that give you access to special tournaments and allow you to collect more Dark Energy Crystals (DEC), the in-game currency that is a second layer HIVE token and tradable on various exchanges. They are also combinable, a legendary gold foil card requires 4 BCX to reach the highest level. When you combine two or more cards with each other, you are destroying the original cards, lower their total supply and create one new card with the BCX sum of all the BCX you combined.

While an edition is still in "print", it is inflating the numbers of all cards bit by bit. But each edition is limited in total supply and when it reaches the end of its printing cycle, the inflation halts and deflation sets in. We can see this taking place since the end of the Splinterlands Alpha edition, as well as the following Beta edition and the various Reward and Promo cards that are already out of their inflation phase. Below you see an info chart with the current number of combined cards per edition. 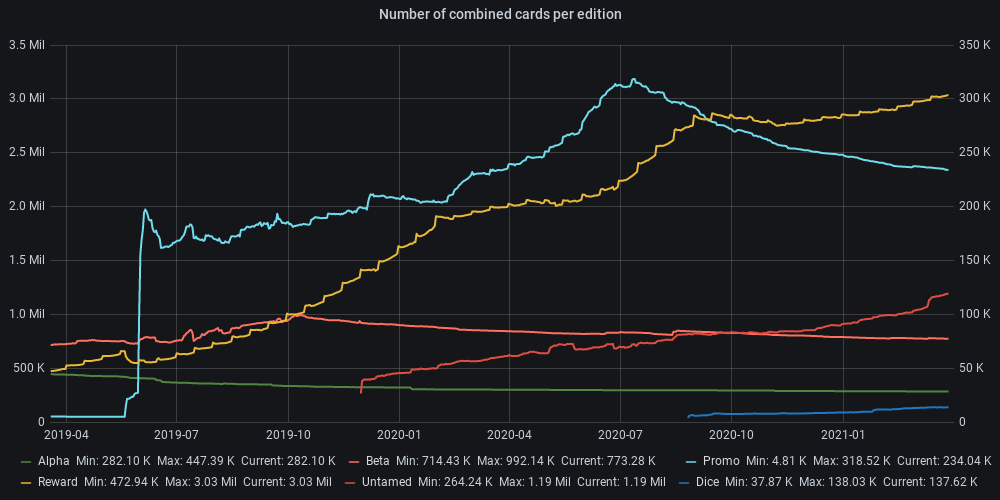 As more and more players are entering the game, which is actually happening and accelerating over time, the supply of all the cards are shrinking rather quickly. Just within the past few weeks, there has been a rush on the older editions, basically emptying the virtual shelves of many of the remaining cards, leading to explosive growth in card value and total market cap of Splinterlands cards. 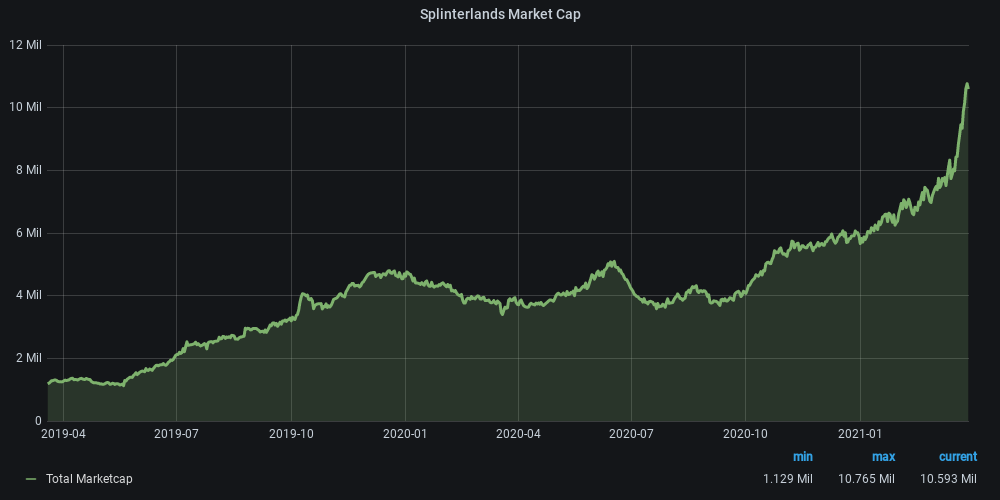 Another factor that increases the deflation of cards is the burning mechanism. You can burn each card and receive a fixed amount of DEC for them, depending on the edition, rarity and BCX level. This card will be taken out of supply and hence lowers the total supply. Since DEC have a real value and can be traded for any other cryptocurrency, this mechanic is being used all the time and even Alpha gold foil cards are burned slowly but steadily away.

All of this creates a hyperdeflation of cards, something that becomes more apparent now, during the crypto bull-run, where money is growing left and right and NFTs and blockchain games are starting to disrupt various industries. But there is more.

The biggest project that the Splinterlands team is working on now, is the upcoming land expansion. They have already had multiple successful pre-sales and collected a lot of cryptos just in time before the mega crypto bubble started. With these funds, they are building a side game, based on NFT land plots, that you can use to farm fourteen different resources and use them to create items and spells for the main card game. It synergizes not only the Splinterlands universe but actually uses the monster and summoner cards from the original game as workers on the land plots (and the DEC as currency to build and upgrade buildings on those plots). The older the edition, the more exclusive the rarity, the higher the level and the better the foil, the higher are the expected boni you get for the production rate of the land plot.

While the DEC is being burned, which lowers the supply of the in-game currency, monster cards are staked as workers in the buildings of the land plots. Much of the mechanics are still to be disclosed but it has been mentioned that potentially multiple cards can be staked as workers on each land plot. Every building upgrade and every monster worker will increase the production rate or effectiveness of buildings. Since all items and spells are exclusively created by the land owners, there will be a huge demand on the market to get those for the their decks in the original Splinterlands card game.

Resources are also second layer tokens and hence can be traded accordingly. The developers even suggested to create liquidity pools for all of them, which will make trading them fast and easy and inlcudes a DeFi element of further passive earning into the game. So there will be additional demand for resources, in order to pool them, next to burning them for spells and items. All of this will generate a vast economic ecosystem, that will only accelerate the hyper deflation for Splinterlands cards.

It is fascinating to see how the crypto bull-run in general, as well as the booming NFT and DeFi market in specific will all be combined within Splinterlands and generate a massive economic ecosystem around NFTs and crypto. It will be a great balancing act that Splinterlands has to achieve, in order to keep the game accessible to low-budget newcomers and to make it a great farm that constantly keeps creating value to the owners of monsters and lands. But it seems, that owning monsters will become very profitable in the future.