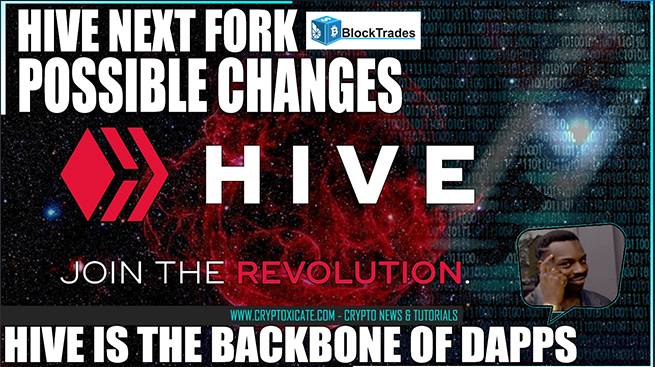 Always take in consideration non of this information is financial advice or official announcement from any specific project, I’m no financial advisor, trader or expert, this is just my personal opinion on certain project mention on this article, cryptocurrencies are extreme high risk assets and you must do you own research, never follow what I or other people say on internet

If you are reading this article then same as others may think Hive is dead, I get you, but nothing is perfect, decentralization is very nasty when trying to please everyone, Hive hard fork is the same situation when someone gets divorce and have kids, 99% is a total mess at first, Hive hard frok from Steem was not easy same as most divorce none of the two sides are 100% right and did wrong to certain degree. It's up to each side to work hard and let the results talk for them, IMO it's just too early to start demanding things since at the moment devs are starting to get things potentially in order and fix the mess that Steem development was, you know what I mean if you were on Steem everytime there was a fork, it was easy to go down from 2 to 5 days after the fork.

I have recently got into Hive again, never left but since November the 5 I have started to get update from what has happen, whats going on and getting to create content, just written content for now, I enjoy it more than making videos.

As we can see this is potentially the very first time Hive have stay over a month within a channel and with very little volatility, this is what many consider accumulation phases, all the previous volatility was distribution of an Air Drop a.k.a lets dump this free money, there were a lot of users that didn't know about the hard fork untill it happen, they didnt know what was going on and why they got this free money they can dump it so it took about seven months for sellers to get exhausted, you may think that during bull market everything has to go up but the situation where Hive is now wont push the price up, its just taking a break from all dumping, price takes time to heal, Hive is not dead, as a fact there are more dapps than before, more development, some of this dapps/communities are starting to work on ease of use to attract more users.

So we got rid of the price issue, now lets see what are the changes that the dev team have, potentially for the next hard fork in about six months, why six months? so Exchanges don't have to update nodes constantly.

Possible Changes on Next Hard Fork
HMT - Hive Media Tokens
Similar to Ethereum ERC20 and smart contracts, this idea was never implemented by Steem dev team or even finish

"HMT code hasn’t been tested well yet and would likely need improvements prior to release...In short, the topic needs more research..."

There is not much to say about this topic, essentially the code has not been tested and I think HMT is not and should not be the main focus of development at the moment, since Hive is coming from a fork that was essentially structural to the network, yes HMT will be very useful along with smart contracts on the network although now HMT feels more like what we have on Hive-Engine for the end-user, I agree that HMT best implementation would be on a second layer along with smart contracts if not then basically is worthless. I love they not releasing code that is not fully tested, this is already a change from what we had with Steem in the past.

At the moment when it comes to changes to Hive instead of HMT we should be looking for new ways to get the users that already in Hive to engage, I think there are already a lot of creators but when we look at the comments and interaction between users who consume the content there is almost none, can you imagine how big Hive would be if all post have at least 10% of the comments that @Blocktrades post has??, ways to get ppl to interact and ease of use for those who are starting.

I think this is great, this will not only get rid of people votes as they mention "die - dead people really can still be voting...lost their keys" and this also opens the door for people who essentially are not too much into Governance, they still into Hive but when they get that warning on their Hive profile "hey your vote expire" gives them the option to even change their mind about their last vote, if they want to change it for their own reasons this way voting will fluctuate more, ppl always talk about whales and witnesses getting Hive to work for them but same as presidents, who choose them? you have a vote you can choose your witness or support a proposal.

Sadly I think this is something many people don't know that they can get rewarded for voting for others people post but there is a way this votes are measure, efficiency, on the next hard fork they planing to change this, right now if you vote early than 5 minutes of the post been published you get way less than anybody else who vote for the post, they are concerned about auto-vote bots but this is something that will always exist no matter whats the rule although I still believe that there should be a way to measure this because IMO having a rule that works or at least works half way is better than nothing, it's better than chaos and open the doors for a free for all, the propose change is to get rid of the 5 minute rule and just have an expiration time frame for voting, they considering from 2 to 24 hours, many have mention on the comments that 24 hrs will be fine since not everybody can check their Hive account everyday.

It's just changes that don't need a hard fork

To be a witness you need to run a node and this is not an easy thing to do, you need tech skills and do maintenance on your node for example upgrades, also need a computer 24/7 running the node software and it's not cheap done the correct way, I still run a few masternodes and just recently run a node on another network, I want to start running a Hive node just to participate and provide redundancy.

"4) is the most critical change. Currently it takes over 4 days to sync all the existing blockchain data to a new hivemind instance. We should be able to significantly reduce this time by creating a custom plugin that can fill a hivemind database "

A light version of the node will benefit the entire network, developers, witness and users as me who don't want to be a witness but would like to provide redundancy to the network.

Second layer include all Dapps on Hive, Hive is the backbone of all Dapps, some ppl think that if dapps token go up then Hive should too and thats not true, a clear example is how high DeFi tokens on ETHEREUM has gone up even higher than ETHEREUM itself but most of them cant exist without ETHEREUM, Hive doesn't have that right now, @Blocktrades mention they will be work on a framework for second layer so Dapp development could be more easy, efficient and fast since most only use API calls and that is a bottle neck.

"The basic idea for this system is you assign judgment skill ratings to people you know in various disciplines and you also publish your own ratings on products/people/ideas."

This last topic he didn't explain that much but if they can pull this off it could IMO become a type of anonymous KYC, on a social network like Hive you get to know people on their personal level even though you don't know who they are, users are constantly interacting in many ways, not as much as I would like to get Hive to grow but based on this users can rate each other, mix with smart contract this can potentially become trustless because you will "trust" the software based on the data that it has collect, KYC Know Your Customer, based on others people reference you can potentially trust that this someone will complete a task or based on his record of "verified" tasks can assign new ones just to give an example, IDK maybe I'm wrong about this but if its similar to this I think it will have a big impact on users and witnesses too, this is just me talking my imagination.

This is just my opinion and short version of what is on @Blocktrades post, I invite you to be part of the comments or read the entire post so you can have a more detail version and better understanding of his ideas and whats coming next for Hive, I told you it's not dead, it takes time and this project just started, even though it's a Hard Fork of Steem, Steem was going nowhere so they are getting things together to start moving forward.

👇🏻Consider Supporting the channel by using my affiliate links👇🏻

DISCLAIMER: The information Cryptoxicate.com or its media channels not limited to Twitter, Telegram, Discord, Instagram, Facebook, or any upcoming social media platform or internet search engine results is not financial advice. This information is for informational and entertainment purposes only. Any information provided are only and simple thoughts and opinions, you must not follow any of this thoughts and look for a professional financial advisor since we are not any type of advisors. Dont not get into crypto currencies since its a high risk investment if you do not have the proper guidance and any investment that you made is your own responsibility and no one else.