Was Robocop Great at Predicting the Future? The films were a warning to future generations to not go down this path. The writers and producers of these films saw the excess of the 80s and knew that if we stayed on this path for too long, the world would eat itself alive.

While we're not there yet, Robocop had plenty of dead-on predictions of the future. Of course, Some were WAY off. Today, I'm going to discuss the news segments and commercials in Robocop. Let's see how well Paul Verhoeven did at predicting the near future. This article is focusing on the original film, not the garbage fire of a reboot.
For anyone who never saw the film... On July 17, 1987, Robocop was released in theaters.

Directed by Paul Verhoeven, Robocop is set in 2028. The film centers around Murphy, a gun-downed police officer who is transformed into Robocop by Omni Consumer Products (OCP). He is OCPs answer to a rising cop crisis and the excessive gang violence in Old Detroit. 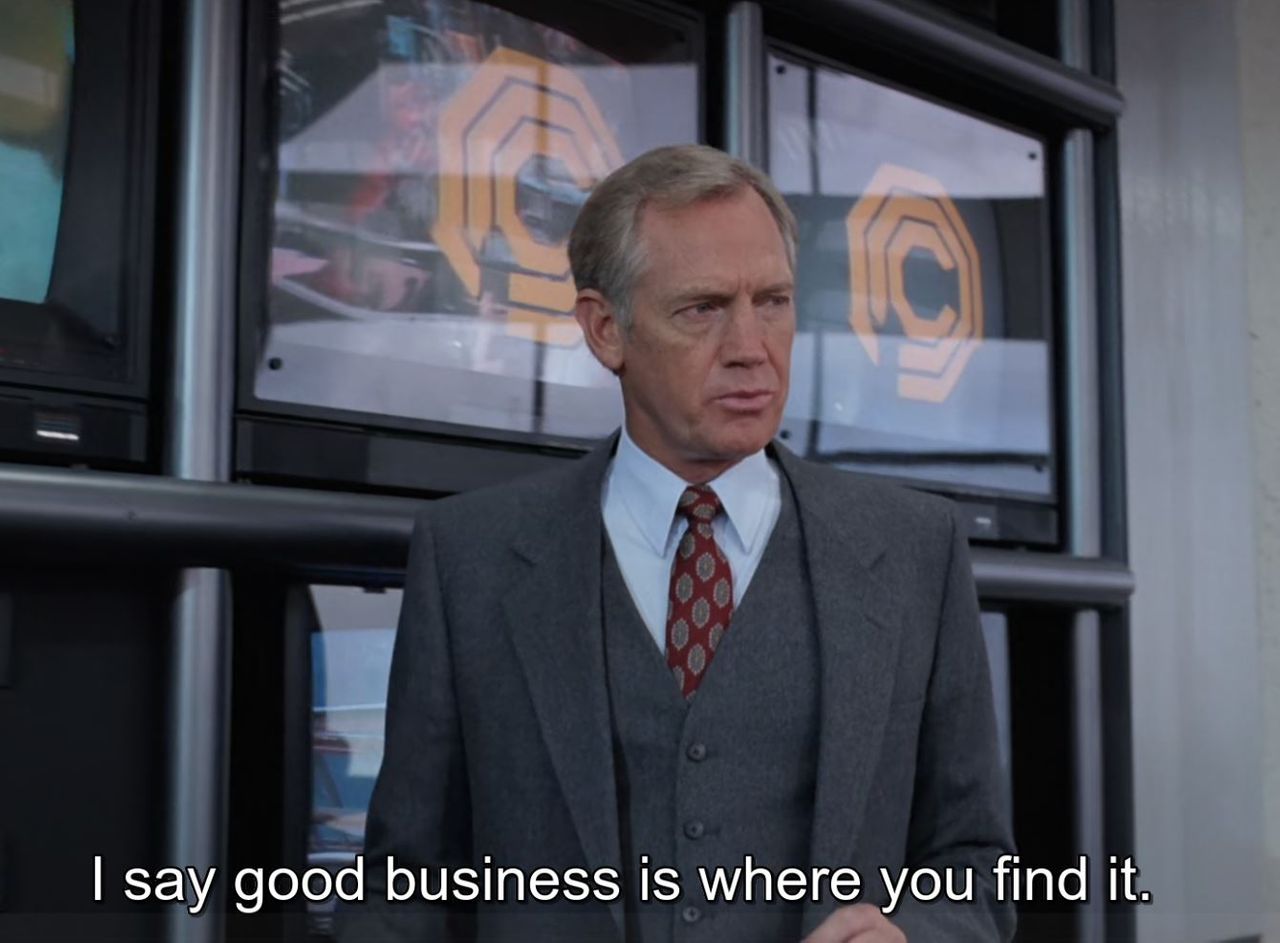 Robocop is a bloody violent action film on the surface but a deep dive into corporatism, capitalism, police brutality, and more.

It's also eerily good at predicting much of the current times we live in.

During the film, we are given short news briefs from Channel 9 Mediabreak news. Mediabrak also provides us a glimpse of some future commercials.

Since Robocop is such a complex and interesting movie, I figured I'd concentrate this article on Mediabreak and the commercials. Going over the entire film for predictions is far too big a task for this article. Let's get onto the news. There are 3 news segments in Robocop where Casey Wong and Jesse Perkins give us some fantastic worldbuilding. No matter how grim or disturbing the news is, our newscasters provide the news with a smile.

Included with each newsbreak is a fictional commercial that also satirizes and predicts the future. After the opening credits, Robocop starts with a news segment from Channel 9.

This is where we get our first glimpse into the future and meet our news anchors, Casey Wong and Jesse Perkins. They are upbeat and smiling throughout their reporting. They also just stick to the story and go on to the next one.

Upbeat news was definitely a thing in the 80s and 90s but we took a dark turn in the late 2000s. Their reporting is nothing like the news we receive in 2021.

Fear factories like Fox News have changed the news game forever. CNN and MSNBC are no better and only cater to their audience. Fear and hatred score way more viewers than sincere and upbeat any day of the week. Anyway, let's get onto the news.

Robocop gets 0/5 crystal balls on this prediction. 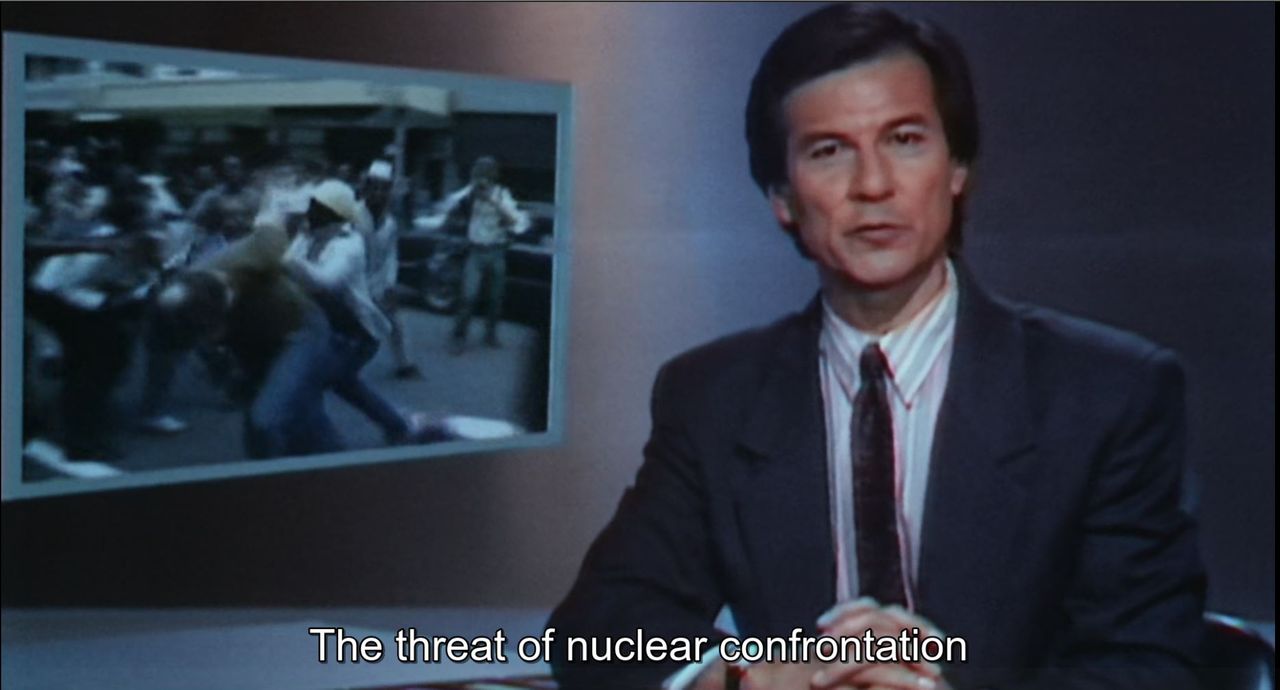 I'm giving Director Verhooveen 1 crystal ball out of 5 for accuracy on this one. 🔮 Up Next, The President Visits the Star Wars Orbital Peace Platform

OK, so Star Wars Orbital Defense was a "thing" in the 80s. Of course, it wasn't real or would ever become a reality, but gung-ho nationalists always get caught up with America's "Defense" and it's a great way to fleece the population of money. Whether it's Star Wars or Space Force it's all the same bullshit and designed to take money from Americans for useless projects.

So while Star Wars was never real and there is no way we would ever send the president to space, this prediction does have some validity. I mean Trump's Space Force is insane and stolen right from Regan's playbook. Oh, and we haven't invented artificial gravity yet.

Time for a Commercial Break

We are now treated to our first commercial break. This commercial is for artificial heart surgery at The Family Heart Center. They have a wide range of hearts to choose from including sports models. Verhoven nails the tone of the commercial yet overstates our technology by years or decades.

Of course, artificial hearts exist but they are not readily available like this commercial states. The ad makes it seem like anyone with a few hundred dollars can go get a new heart. It also makes it seem like it's a simple surgery.

Medical ads are also extremely common during news shows since many of the viewers are aging and susceptible to these types of ads.

Gonna have to give Verhooven 1/5 🔮 on this one. Back to the News

The Final news story of the intro is an exposition dump giving the viewers some backstory on Old Detroit and its crime. Omni Consumer Products (OCP) is also introduced during the segment. We learn that OCP has privatized the police in Detroit to combat the extreme violence in the city.

The police in Detroit are seriously underfunded and need assistance desperately to protect their citizens.

So Robocop almost nails this prediction. Private police and security forces are increasingly prevalent in America's cities. Police everywhere have been fully militarized to protect against a perceived increase in violent crime.

In the film, the police do not have enough power to handle the crime. However, in reality, most police forces are way overfunded. Police violence is up, arrests are up, and general distrust of police is up. Actual violent crime is way down from the 80s when the film was produced. Cop killing is extremely rare while citizens being killed by police has skyrocketed.

The film is really close on this one. The police are militarized and privatized due to a false narrative that crime is on the rise. But the police are not underfunded and they often overreach and perform violence and murder against the citizens they were supposed to protect.

After this news report, the movie finally begins. About 40 minutes into Robocop, the next Mediabreak plays starting with a news story about Robocop himself. He's finally on the streets and exerting judicial force and justice. This first report has the anchor introducing Robocop to the public. This segment is more of an expedition dump to the audience. News anchor, Jesse Perkins, does mention that Robocop is a "soldier" indicating the militarization of police and also has Robocop indoctrinating children. I'm not going to give a prediction rating for this segment. Delivered with a smile, our anchors provide details on the growing Mexican Crisis. American troops are participating in military actions in Mexico against rebel forces.

While the film gets the reason wrong, Robocop is dead on that we would be militarily involved with events in Mexico. Between drug cartels and border actions, Mexico has become a hotbed of action for The US military and police forces. Nuclear war and proliferation was a hot topic in the 80s. In 1987, the threat was still real and it became part of the culture. Films like Wargames turned nuclear war into a game. Here's the home version! It's fun for the whole family!

The film gets 0/5 for this prediction. No nuclear war ever came and the threat was replaced with the drug war and the war on terror. Delta City is a planned construction owned by OCP. They are involved in every aspect of this city from its design to operation. OCP will run everything in the city and have control over all daily activities inside its borders. Sound familiar?

Amazon has plans for the same thing. They are plans to construct cities around their warehouses and factories. The employees will live in Amazon homes, eat at Amazon restaurants, and shop at Amazon stores. If this doesn't sound like a dystopian nightmare to you, you're reading the wrong article.

Onto the Last Newsbreak from Channel 9

We receive our last newsbreak at about 1 hour and 15 minutes into Robocop. The break starts with a commercial. 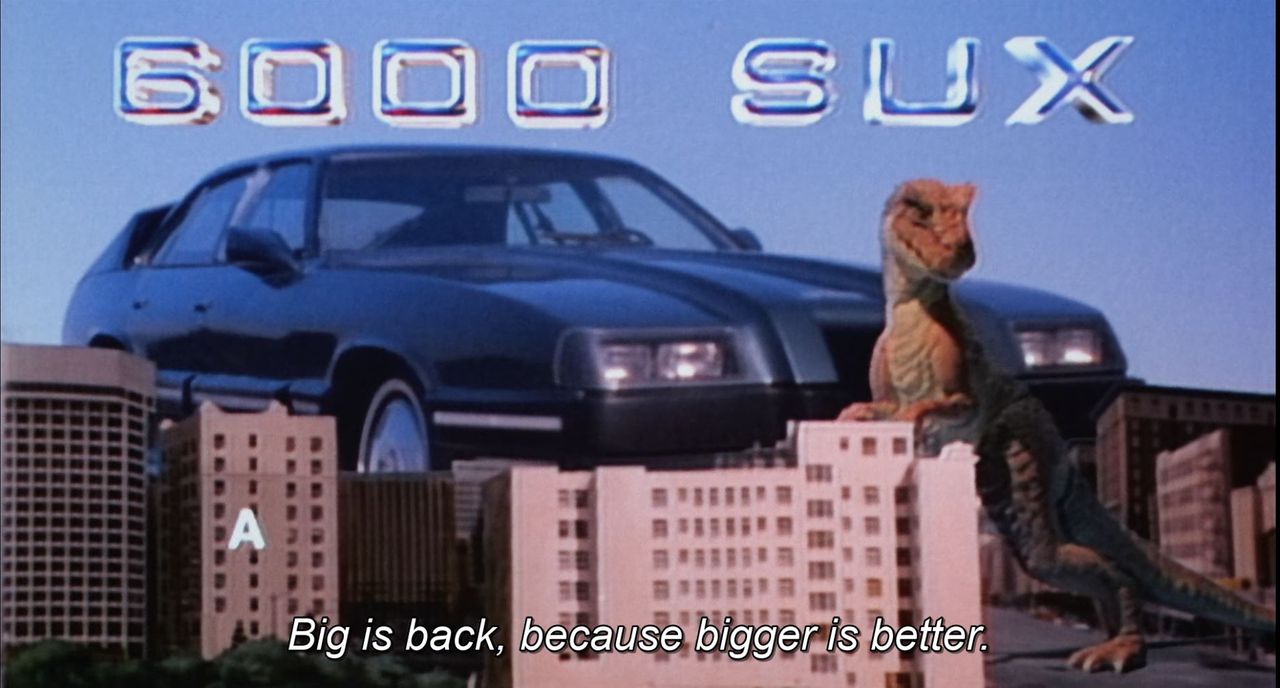 The 80s was the pinnacle of greed and excess. We haven't fallen far from that pinnacle. Greed and excess are back in a big way for 1% of the population. The SUX6000 sedan is a perfect example of American excess. Who cares if it only gets 8mpg, just look at me in this car instead.

California is on fire. 10,000 acres of Santa Barbara were set ablaze when a laser cannon accidentally fired on the Strategic Defense Peace Platform. The blaze killed 113 people and 2 ex-presidents living in Santa Barbara.

OK, so this one might be my favorite. California is always on fire so that's accurate. There is no such thing as space lasers so that's false. But, thanks to morons elected to congress, some people believe space lasers are responsible for wildfires in California.

In January of 2021, radical conservative congresswoman, Marjorie Taylor Green, claimed that the wildfires in California were caused by a secret Jewish space laser. Yes, a sitting congressperson claims Jews are behind the destruction. Seriously fuck that bitch.

Anyways, Robocop gets a 4/5 🔮🔮🔮🔮 on this, not cause it's real, but because it caused this wild conspiracy. Our final story tonight involves negotiations between the police unions and OCP to help avert a citywide strike. In the film, the police are striking for more support, funding, and assistance cause they can't handle the crime in the city. OCP wants more control of the police force.

In the real world, many police forces have threatened to strike over the past two years. It's not over funding though. Police forces feel threatened that they can't use the force needed to stop crimes. In reality, police have become extremely militant and violent. A day can't go by without a story about the excessive police force in the United States. So is Robocop Great at Predicting the Future?

Robocop has done a great job of predicting our future. Filmed in 1987, it still has its roots in the dystopian, corporate futures dreamed up in the 80s but offers some insight into our current life.

We've only scratched the surface of the film in this article. There are countless other predictions in Robocop to cover for another day.

What do you Think About Robocop?

Have you seen Robocop? I'd love to hear your thoughts on the film. If not, I encourage you to stop what you're doing and check out Paul Verhoeven's masterpiece. He is an amazing director and put together some of my all-time favorite films including Robocop, Total Recall, and Starship Troopers. Don't hesitate to pick up any of these films and prepare yourself for a ride.

I hope everyone is enjoying these posts.