I have already told you about one of Odesa's business cards - the monument to Duke de Richelieu. But besides her, there is another historical attraction that almost everyone knows about. And she is very close to Duke. This is the Potemkin Stairs - one of the main brands and symbols of Odesa. The Potemkin Staircase is a classic example of long-term construction and at the same time a brilliant example of how an expensive and, in principle, devoid of practical meaning, a toy over time acquires completely new properties and qualities, becomes an architectural monument, a source of local pride, an integral part of the Odesa myth.

What is the history of the Potemkin Stairs? The Potemkin Stairs were built at the beginning of the 19th century by order of Prince Vorontsov. He decided to make such an unusual gift to his wife Elizabeth. The prince did not spare the money and gave 800 thousand rubles. This is a cosmic amount at that time. As a result, the staircase turned out to be one of the longest in the city.

The staircase was opened in 1841. Initially, there were exactly 200 steps, but today there are 192 of them. Several steps were covered in order to equip Primorskaya Street. The staircase was faced with granite during the reconstruction in 1933.

And thanks for the fewer steps! Many guidebooks write that it is quite easy to climb due to the optimally calculated angle of inclination of the stairs, moreover, the stairs are divided into ten flights, each of them has twenty steps. Don't believe this! My physical condition is not the worst, but the climb was quite difficult, to be honest. Especially in summer when it is very hot.

It is for such people that the Odesa funicular is located next to the Potemkin Stairs. It connects Primorsk Street with Primorsky Boulevard. The vehicle was built in the early twentieth century. In the seventies of the last century, the funicular was replaced by an escalator.

He did not last long. The new funicular was opened in September 2005 for City Day. The vehicle has one carriage and is designed for ten. Travel time is not more than one minute.

Why is the staircase called "Potemkin"?

The name of the staircase has changed many times. It was called Gigantskaya, Primorskaya, Boulevard, Richelievskaya, and it became Potemkin only in the middle of the twentieth century. For residents of Odesa, the Potemkin Stairs has become a cult place. At the beginning of the 20th century, the local Chamber Theater staged performances at its venues. And the staircase became world-famous in 25 thanks to Sergei Eisenstein who shot the film "Battleship Potemkin" 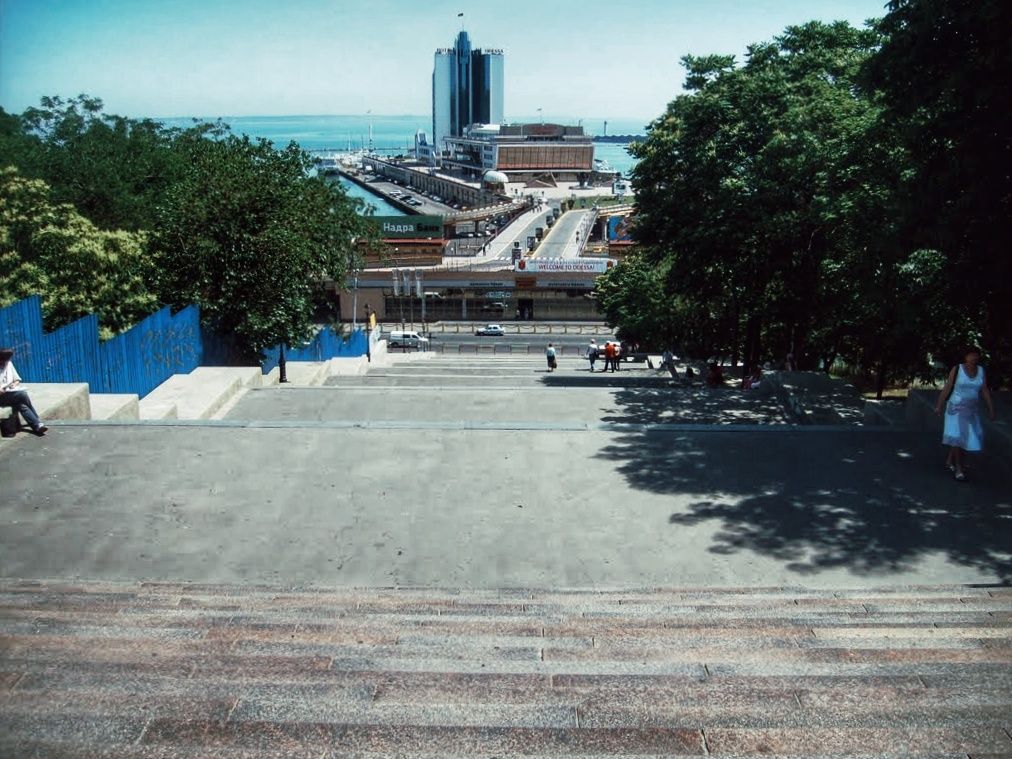 In the key scene of this film, a pram rolls down the stairs. When Eisenstein made the film, he concentrated on various scenes around the perimeter of the stairs. After the premiere, the poet Mykola Aseyev said in his work "How the film" Battleship Potemkin "was made that" Odesa stairs will not be forgotten by the audience". In cinema, huge degrees are forever associated with the battleship Potemkin. The staircase was immediately popularly called Potemkin. And soon the name stuck. Even the literary people who wrote about the stairs often made a start from the events described in the film.

Today people look with apprehension at the Potemkin Stairs. For almost two hundred years of history, the staircase has never been repaired. But here on holidays, 20 thousand people gather. But if you start repairing, you can find a lot of interesting things.

How the Potemkin Stairs were built

The length of the steps is a little over one hundred and forty meters. They are built promisingly. The lower part is much wider than the upper. If you look at the stairs from a height, it seems that the steps are the same width. If you look from below, the steps seem longer. The stairs expand to the bottom, and the parapets look parallel. Only the platform will be visible from the upper steps.

From the top of the Potemkin Stairs, you can see an incredible sea view and cruise liners entering the city.

Interesting facts and legends of the Potemkin Stairs

According to one of the city legends, an underground passage leading to the Vorontsov Palace is hidden under the stairs. Others believe that under the arches are hidden treasures of smugglers and even jewellery Mishka Yaponchik.

Odesa would not be Odesa if its inhabitants did not continue to approach everything with their own humour. For example, there is an annual race up the stairs. The last record is 22.8 seconds. Legendary Odesa athlete Sergei Utochkin once distinguished himself by going down the stairs in a car, motorcycle and bicycle. Participants of the first Odesa Humorins in the 70s went down the stairs on the "Zaporizhzhia". In the ranking of the most beautiful stairs in Europe Potemkin took sixth place. The jury included well-known historians and art critics from different countries. And in 2015, during the Odesa Film Festival, the European Film Academy awarded them the title "Treasure of European Film Culture".

It is almost impossible to count the number of writers and poets who mentioned the Potemkin Stairs. They made an unforgettable impression on Mark Twain, who mentioned them in the travel novel "Simpletons Abroad." They also impressed Jules Verne, who christened them monumental in the novel The Stubborn Keraban. They were mentioned by Józef Kraszewski, Oleksandr Ostrovsky, Vissarion Belinsky, Ivan Nechuy-Levytsky, Oleksandr Green, Valentyn Katayev, Oleksandr Kuprin, Leonid Utesov and many others.

According to one study, the Potemkin Stairs ranked sixth in the ranking of the most beautiful European steps. Due to the features of the coastline, the stairs lead to the sea to the north, not the south.

The Potemkin Stairs flashed in the Polish film Deja Vu.

On City Day, the steps are used as tribune. Which, by the way, is not very convenient for spectators. At least that was exactly what I had during the Independence Day concert of Ukraine.

Where can I see the Potemkin Stairs?

Potemkin Stairs are located in the city of Odesa near the sea station.
The exact GPS coordinates are 46.488730, 30.742014
You can also save my map in Pinmapple.