The Baa Atoll, a UNESCO Biosphere Reserve of the Maldives

How are you? I didn't show my face here at hive for a week, and that had a very nice reason for me, because I was on holiday, in the Maldives to be precise. Travelling to the Maldives has always been a big dream for me and my twin sister, which we then tackled this year. Before we started our trip, we informed ourselves a lot about the individual islands. Everyone likes something different, but it was very important to us that the island had a great underwater world.
(well, I think every island in the Maldives will probably have them). However, it was important to us that there is a large variety of animals on the island, but especially in the sea. After some research, we came across Reethi Beach in Baa Atoll. 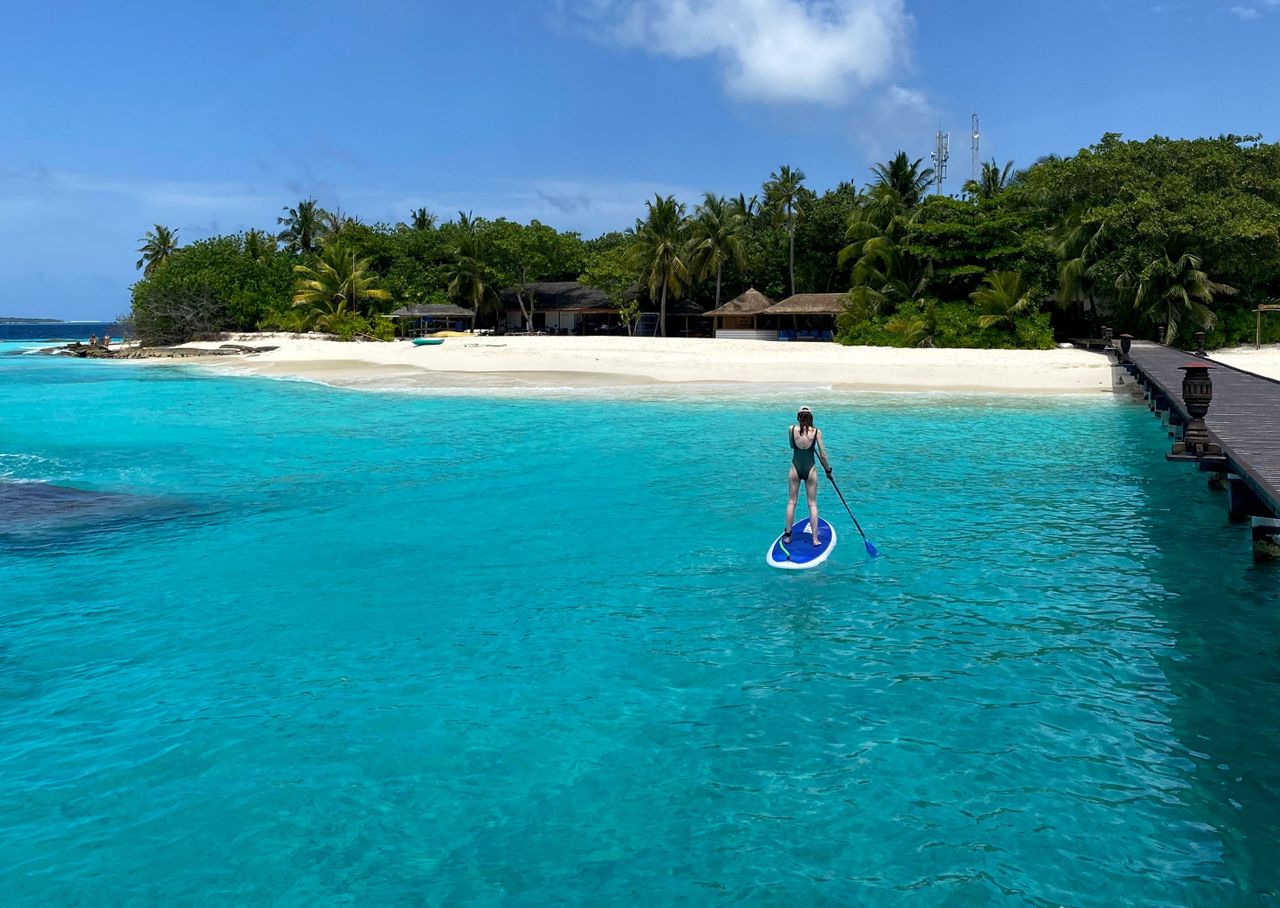 Even more beautiful than expected

And it is precisely this Reethi Beach that I would like to introduce to you today. We arrived there exactly eight days ago. We took the train from Essen to Frankfurt and from there we went to Male with a stopover in Abu Dhabi. Malé is the capital of the Maldives. We didn't see anything of Male itself, only the airport ;). From Male we took a smaller plane and then a speedboat. The whole trip took about one and a half days, which was a bit exhausting, we were glad when we arrived at the reethi beach resort in the afternoon. That day we had a quick look around the island and a bite to eat before going straight to sleep, which was a good decision because we were in great shape the next day.

But now to the island at Reethi Beach: It really was as beautiful as in all the pictures on the internet, no, even more beautiful. The weather was perfect, even though rain and thunderstorms were forecast for the whole week, it was only cloudy one day, the other days the sun was always shining. The water of the Indian Ocean is just as turquoise and bright as you would imagine and the sand is white.

Here are a few impressions of our flight from Male: 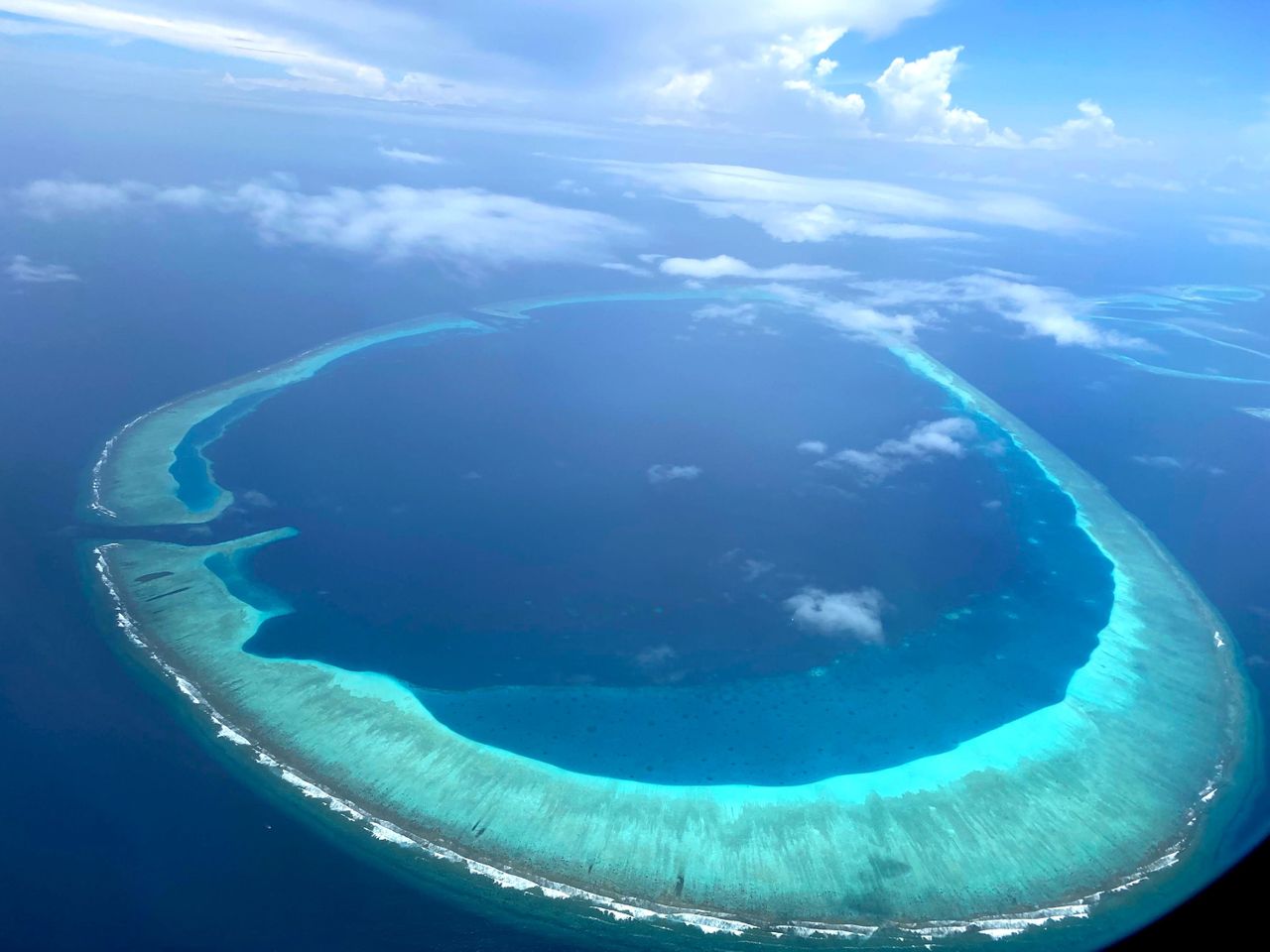 Seeing the atolls from above was something else again - so many beautiful islands, and many of them uninhabited. During the flight we always wondered if the island we were admiring was Reethi Beach;)

The Baa Atoll, a UNESCO Biosphere Reserve, which is particularly committed to nature conservation

On our first day on the island, we first explored the island - and there was a lot to see, too. Maybe I'll tell you something about the islands and Reethi Beach first. There are about 1200 islands in the Maldives, but only 220 of them are inhabited (which doesn't surprise me, we saw so many uninhabited ones during our flight).
Fonimagoodhoo is the name of the island, but most people just call it "Reethi Beach". It is an island in the Maldives, located in the north-east of the South Maalhosmadulu Atoll (administrative atoll Baa). By plane, it is 120 km northwest of the capital Malé. The flight by seaplane took about half an hour.
Baa Atoll itself was declared a UNESCO Biosphere Reserve in 2011. This should motivate other atolls to become involved in nature conservation. The hotels and resorts located on such islands have to make financial contributions to nature conservation and undertake to fulfil the conditions set by UNESCO and the government. In this way, nature such as corals and the marine world with its many inhabitants can be better protected.

And it was put into practice: For example, I hardly saw any plastic on the island, the water bottles and all other drinks were only available in glass bottles. There is also a hotel's own filter system. This is how drinking water is obtained from seawater. The Reethi Beach Resort is also a partner of Parley for the Oceans, an organisation of creatives, thinkers and leaders who work to raise awareness about the state of our oceans and together launch projects to protect and preserve the world's oceans. 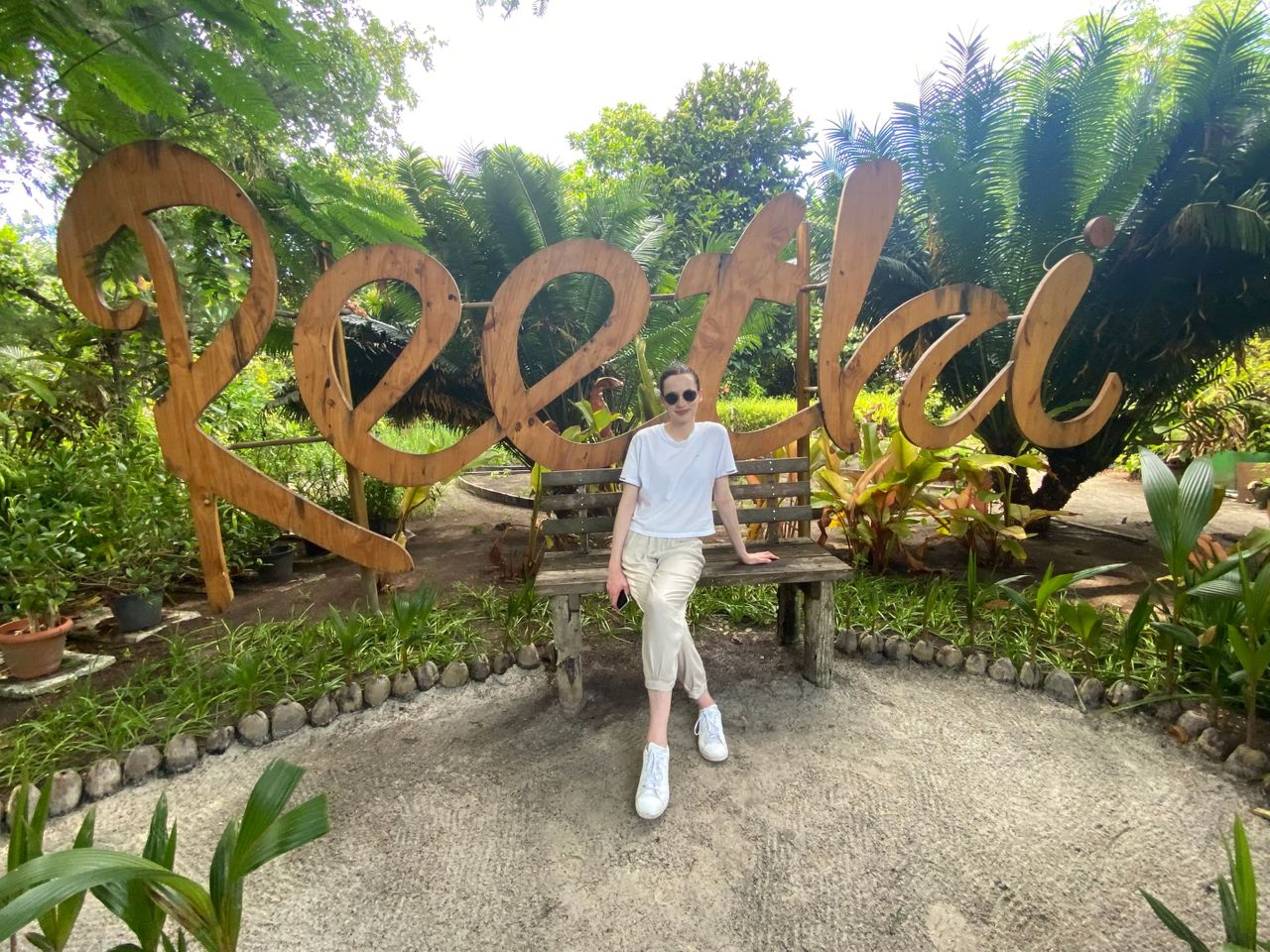 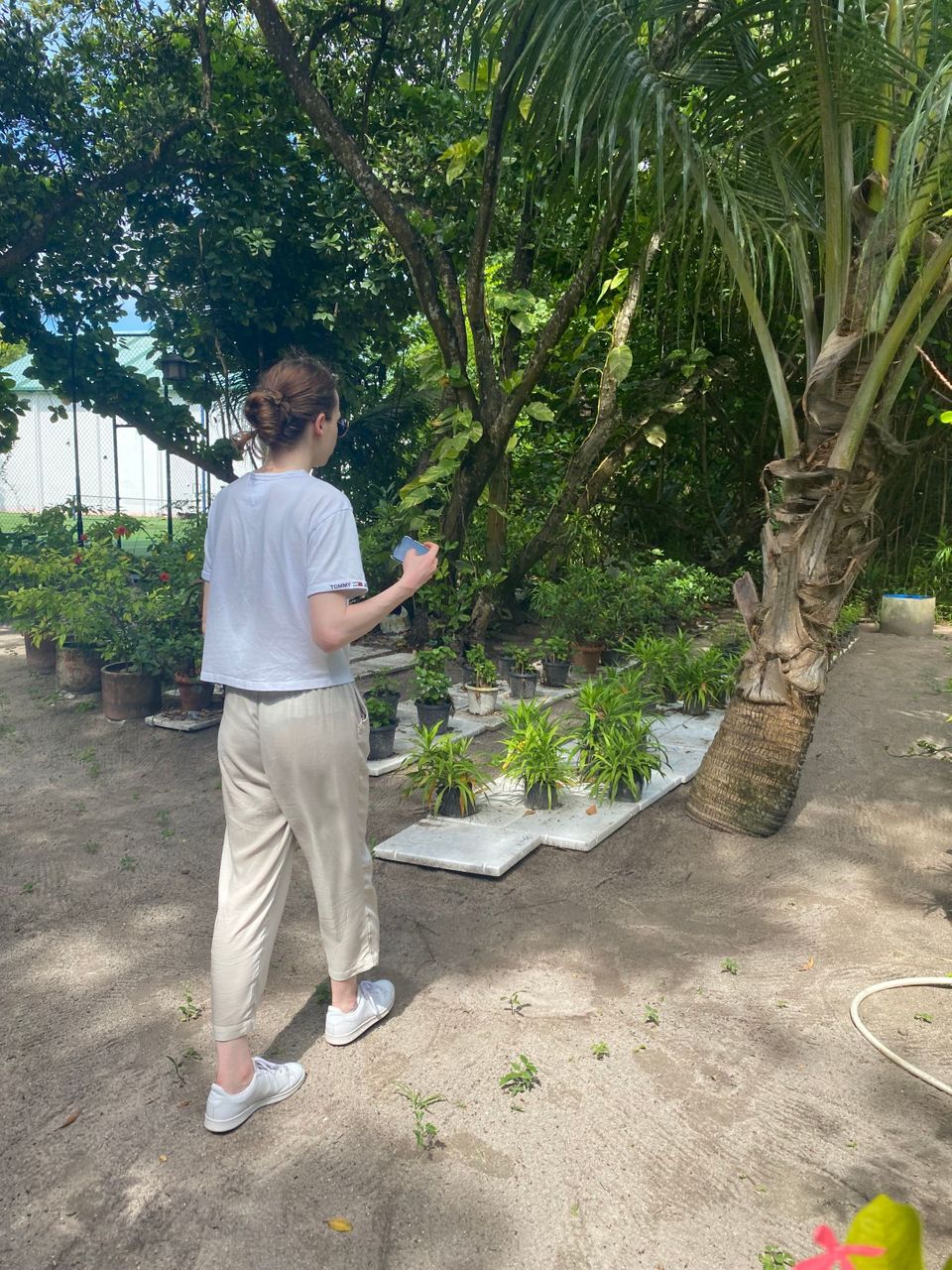 "Nature with Comfort & Style" is the motto of the sustainable Reethi Beach Resort. It is located on Baa Atoll in the north of the Maldives.
What I only learned here: "Reethi" means "beautiful" in Dhivehi. This is the national language of the Maldivians. It was super easy to get into conversation here, both with the tourists (I think more than 70 percent of the tourists were German, which surprised me a bit. You could also get on with German here at one point or another, because the locals even knew a few fragments because of the many German tourists. Nevertheless, people talked in English, of course. Reethi Beach is especially popular with divers and snorkellers, and not for nothing, there is an unbelievably great underwater world here, but more about that in another post.
Reethi Beach is also called a barefoot island, you can really go barefoot everywhere, which I found very pleasant.

And yes, a bit ironic that I put in the headline it's a barefoot island and I'm equipped with shoes myself - that was only the first day, after that it was much more pleasant without shoes haha. The island itself was about the size I had imagined, It is about 600m long and 200m wide. It didn't take long to circumnavigate the island. 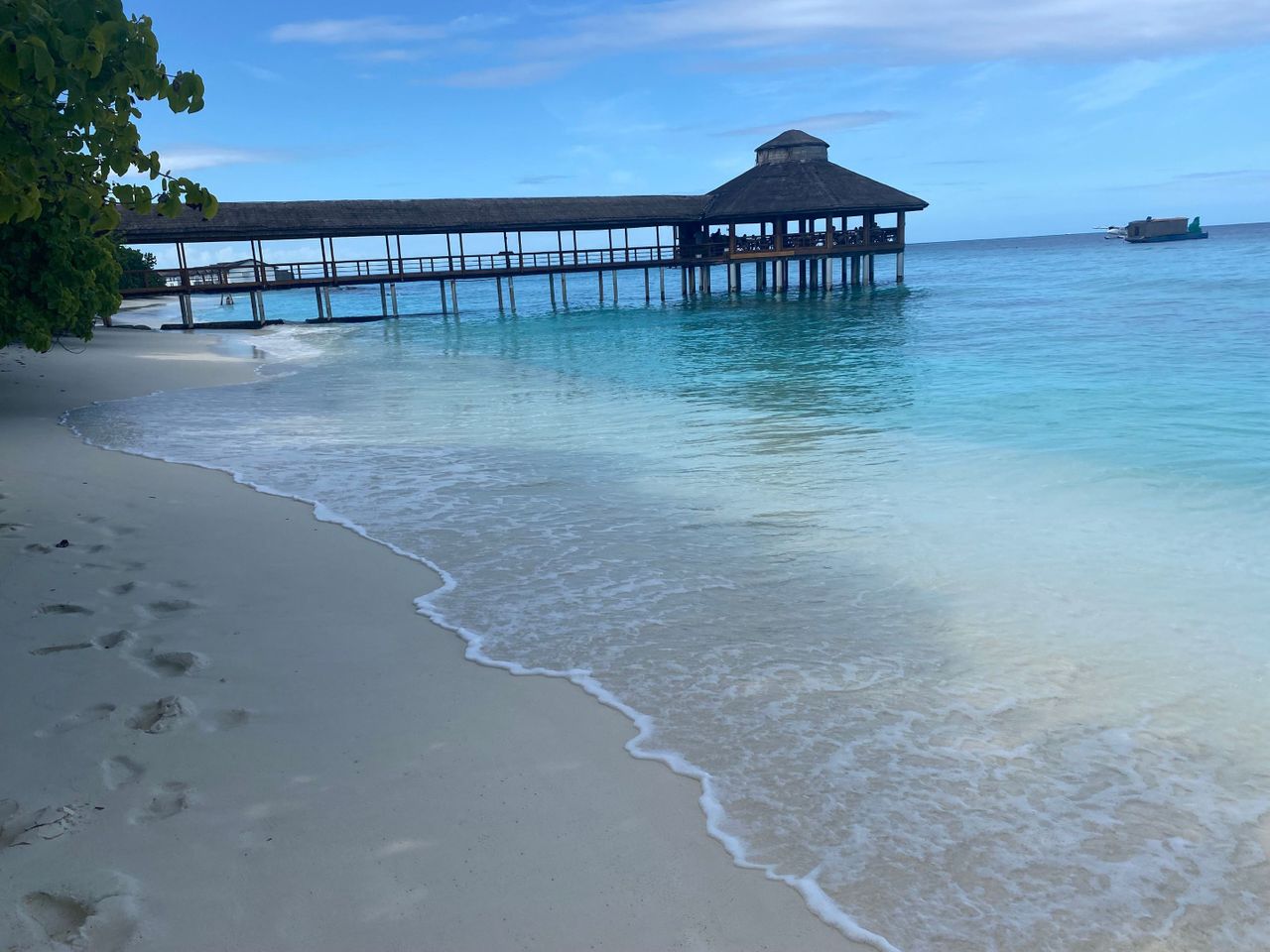 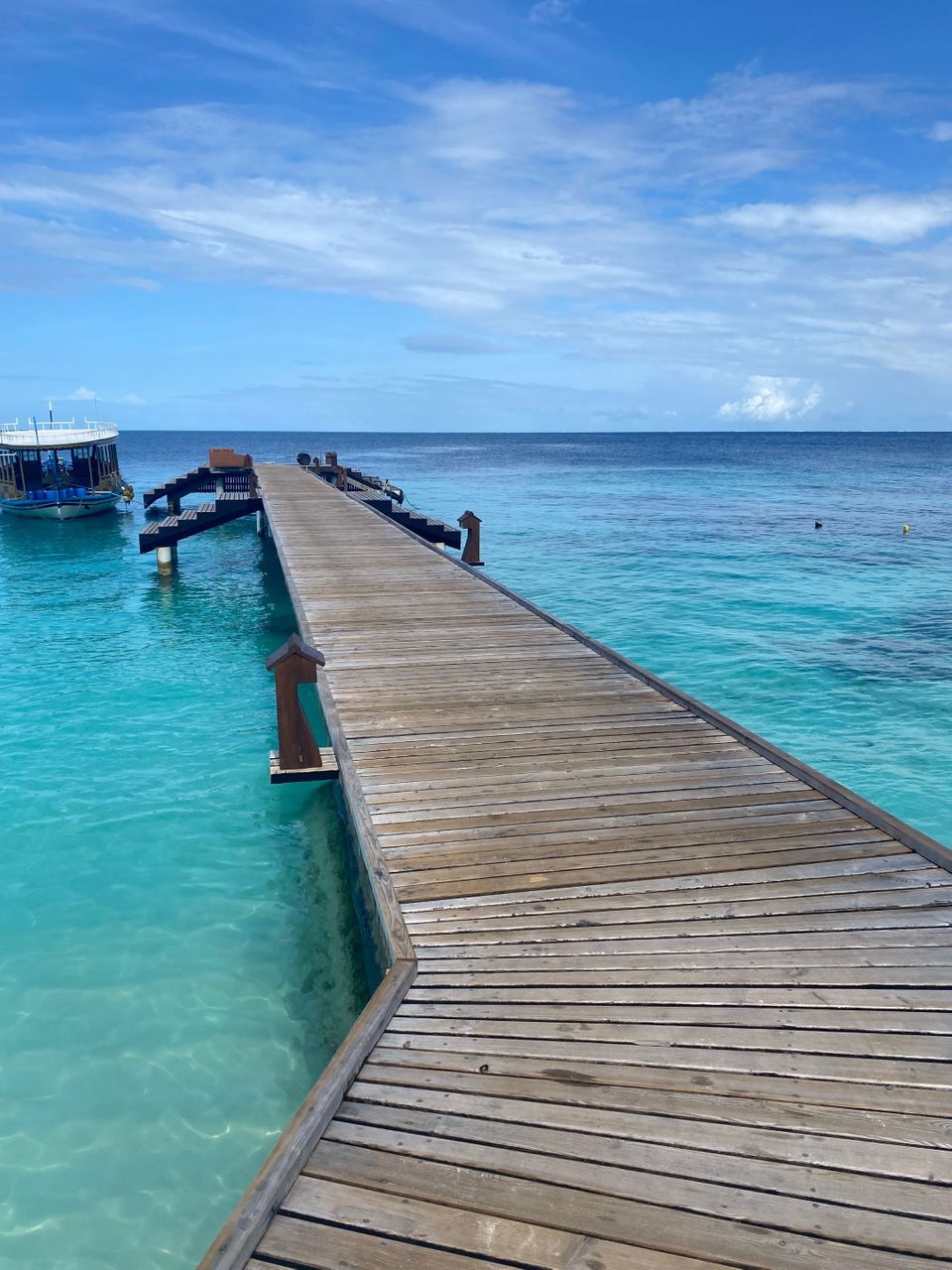 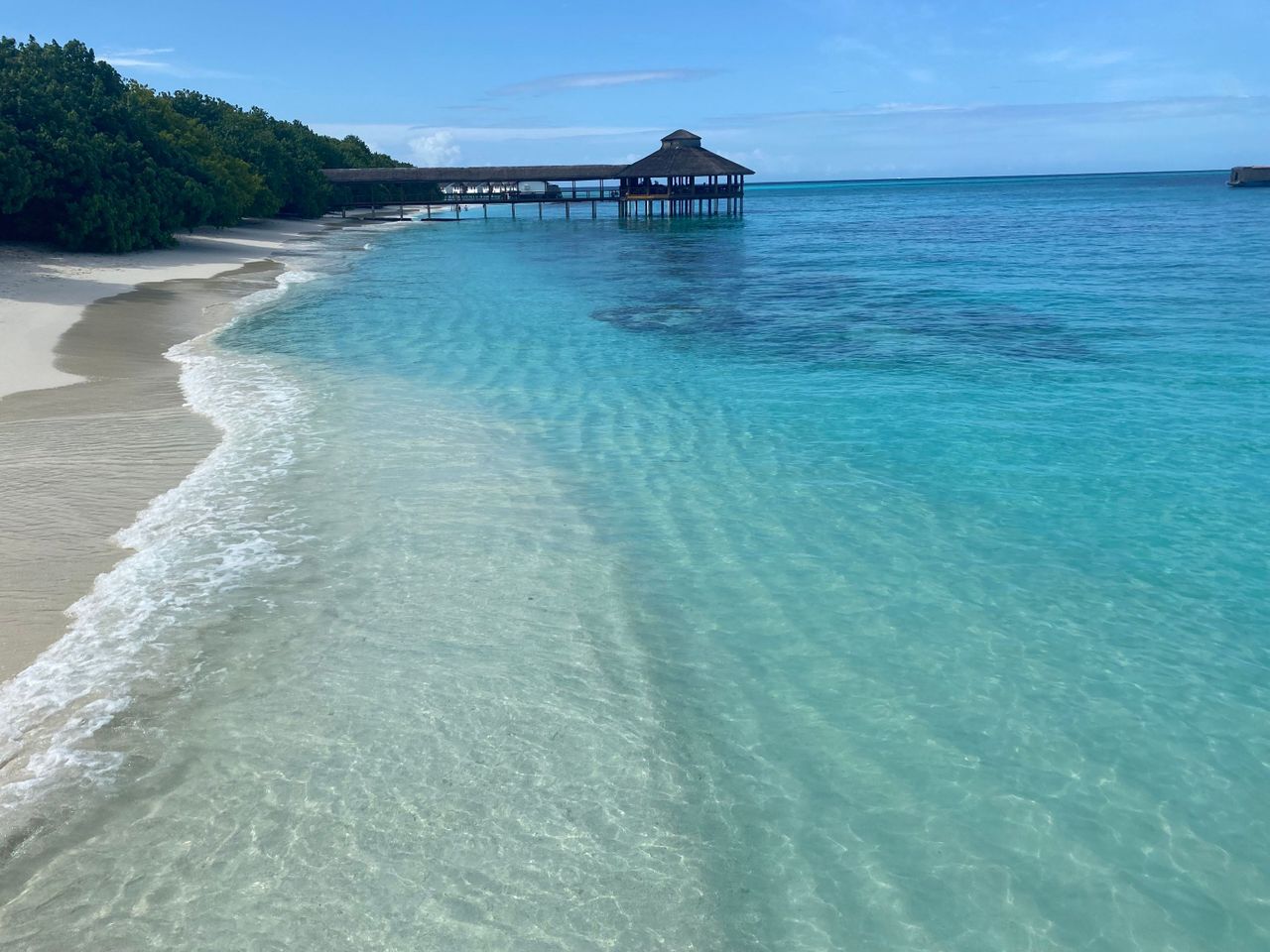 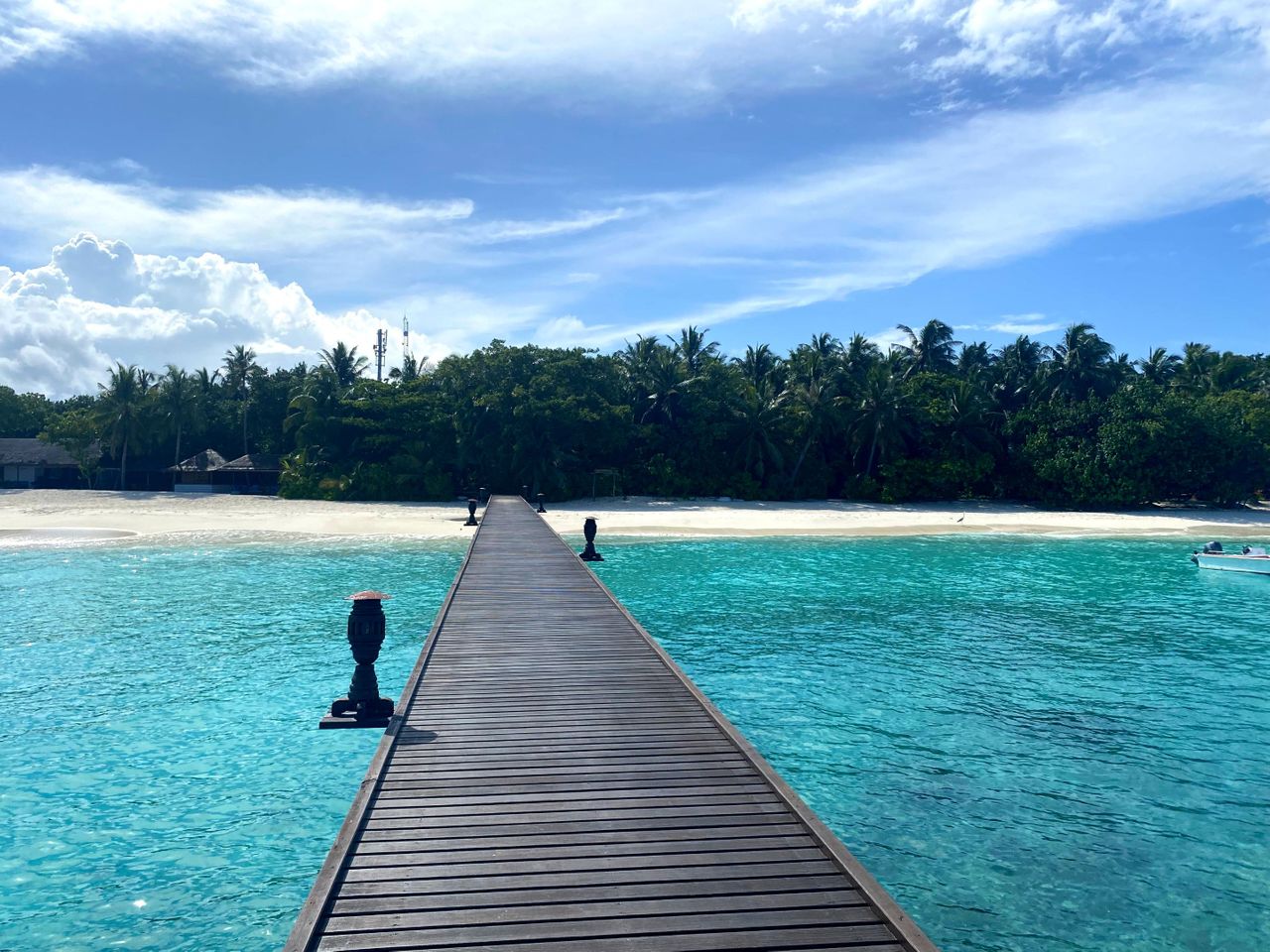 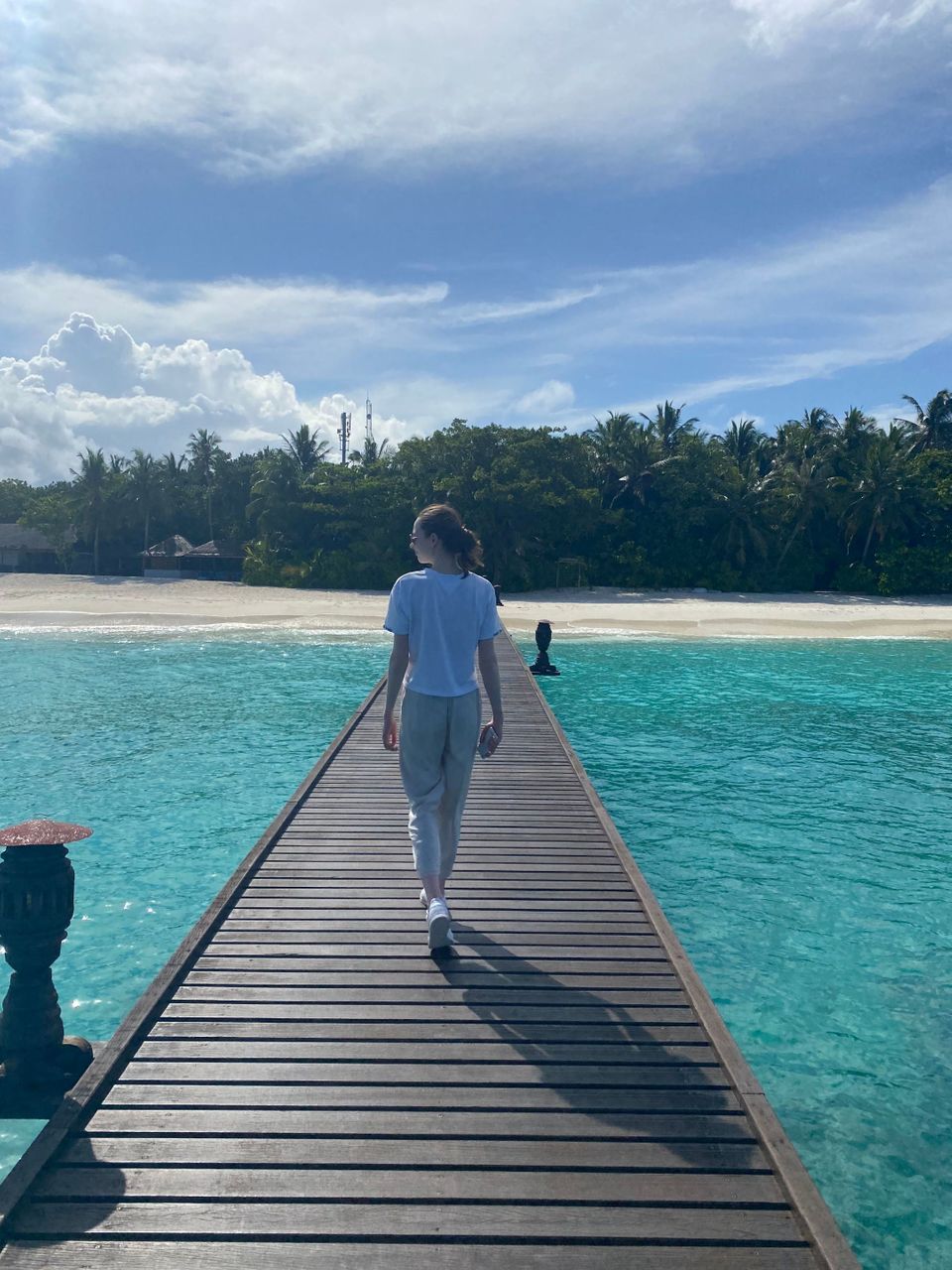 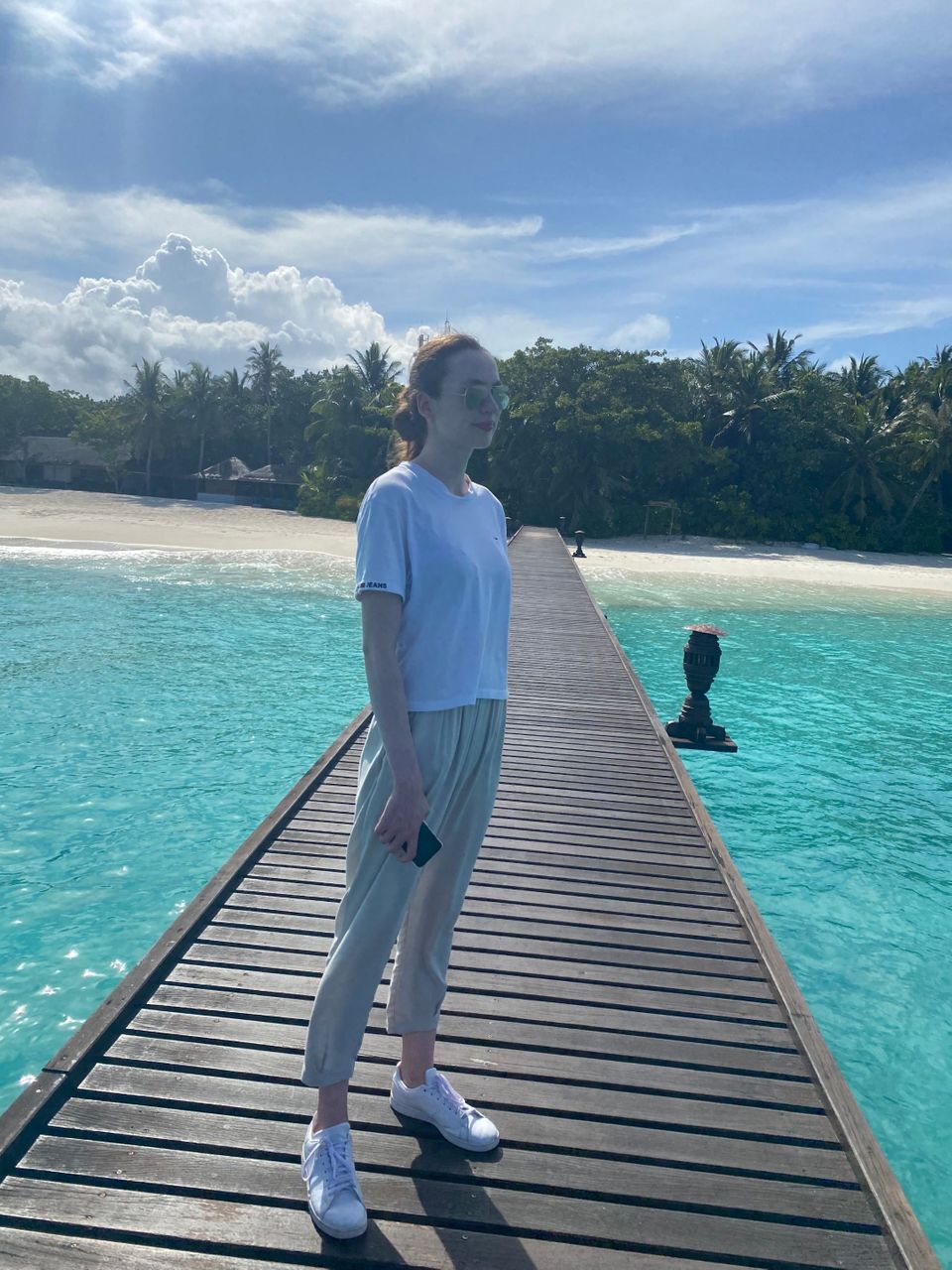 In the pictures above you can see the jetty, this is where we first set foot on the island after arriving from the speedboat. It was an almost surreal sight. Hardly a soul, but the wooden jetty, the turquoise sea and lots of palm trees on the sandy beach. 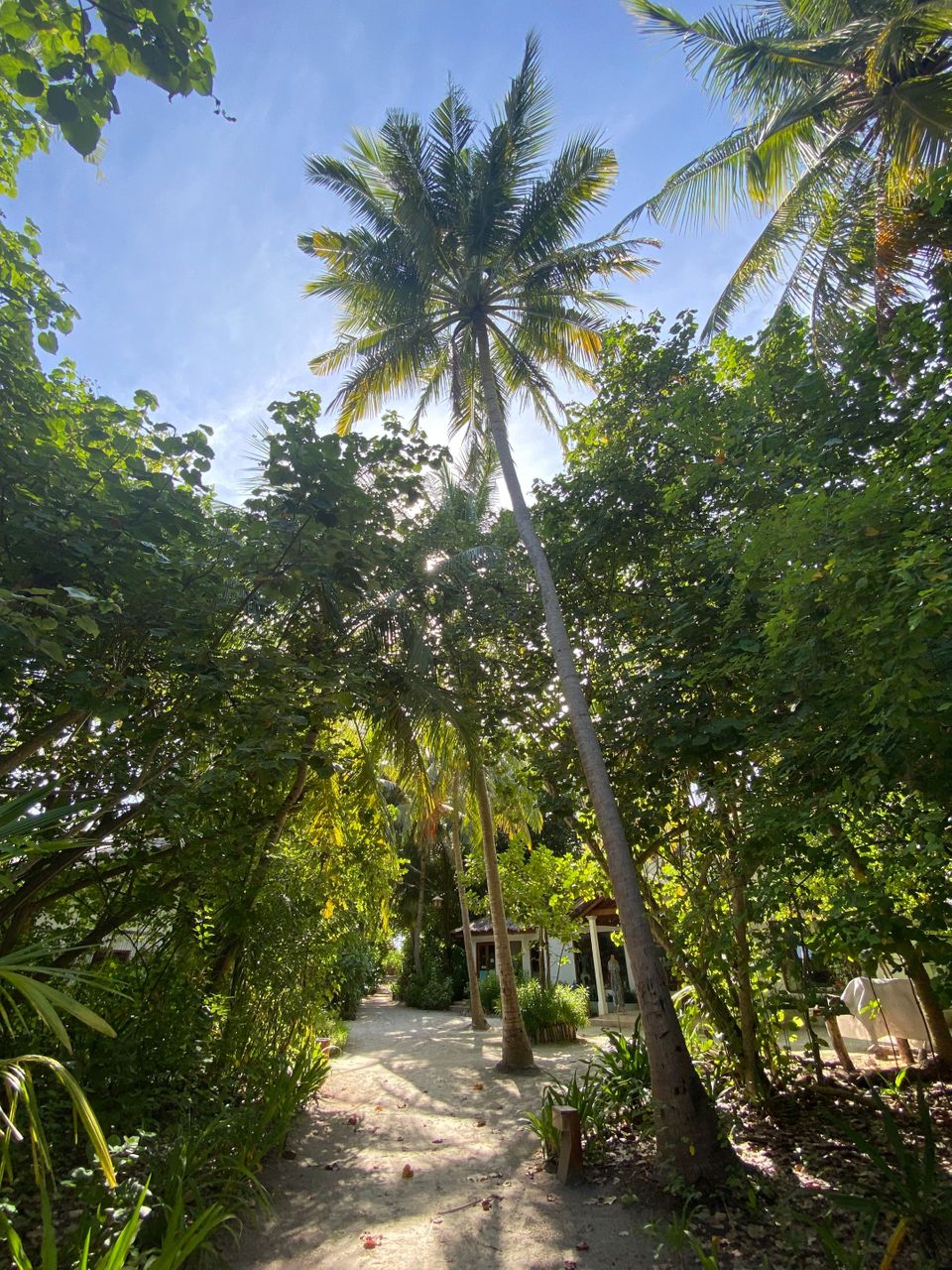 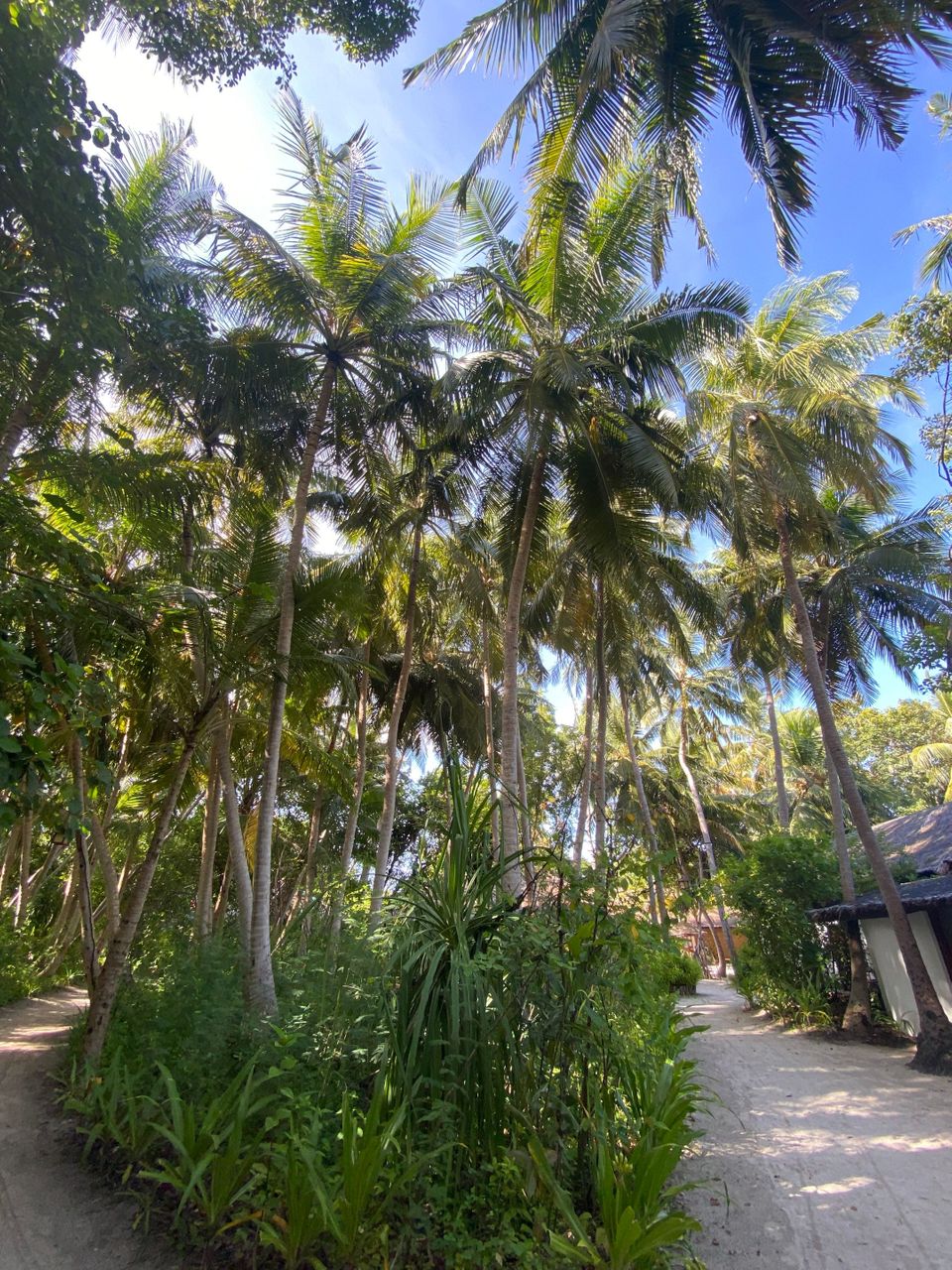 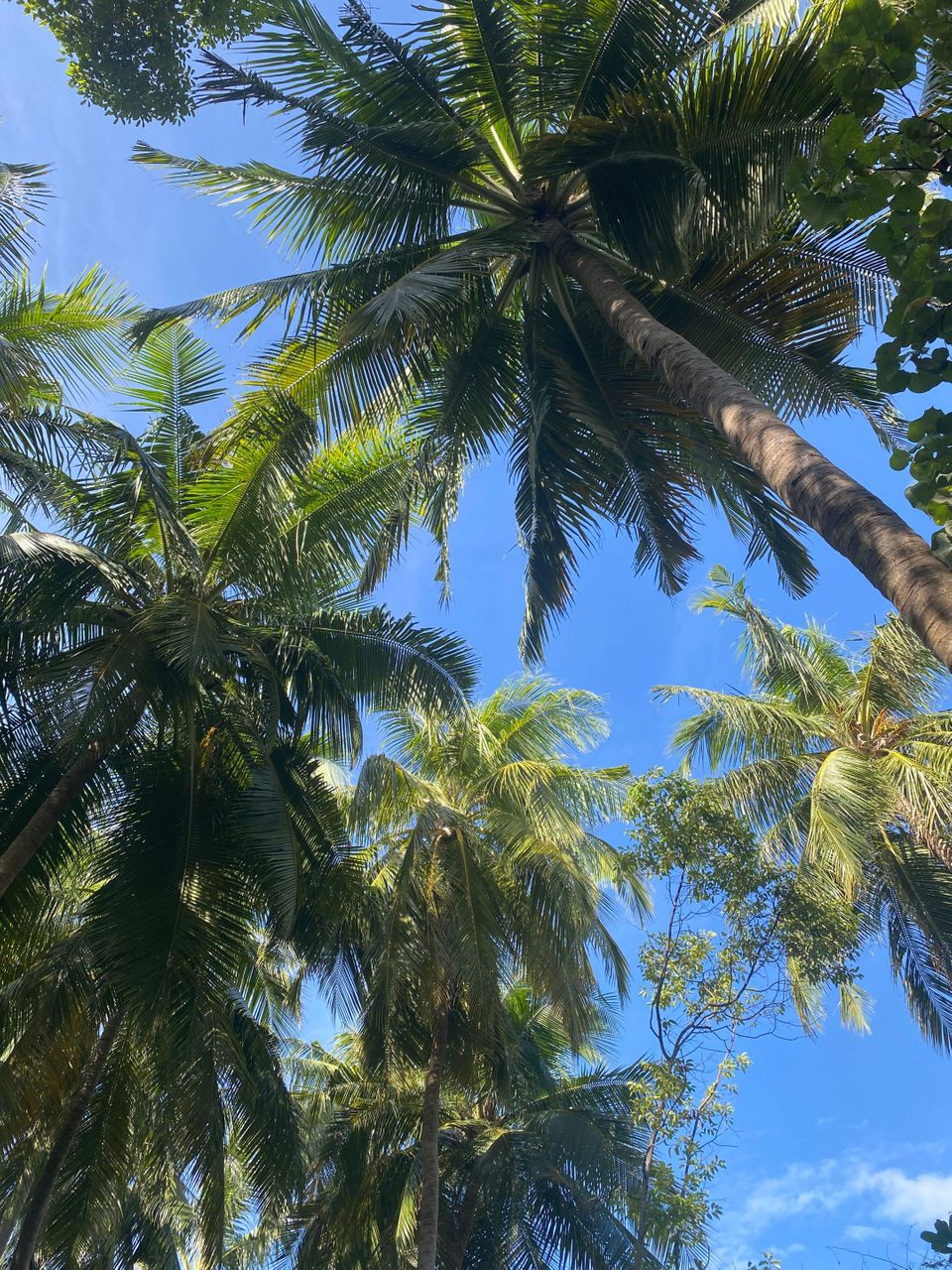 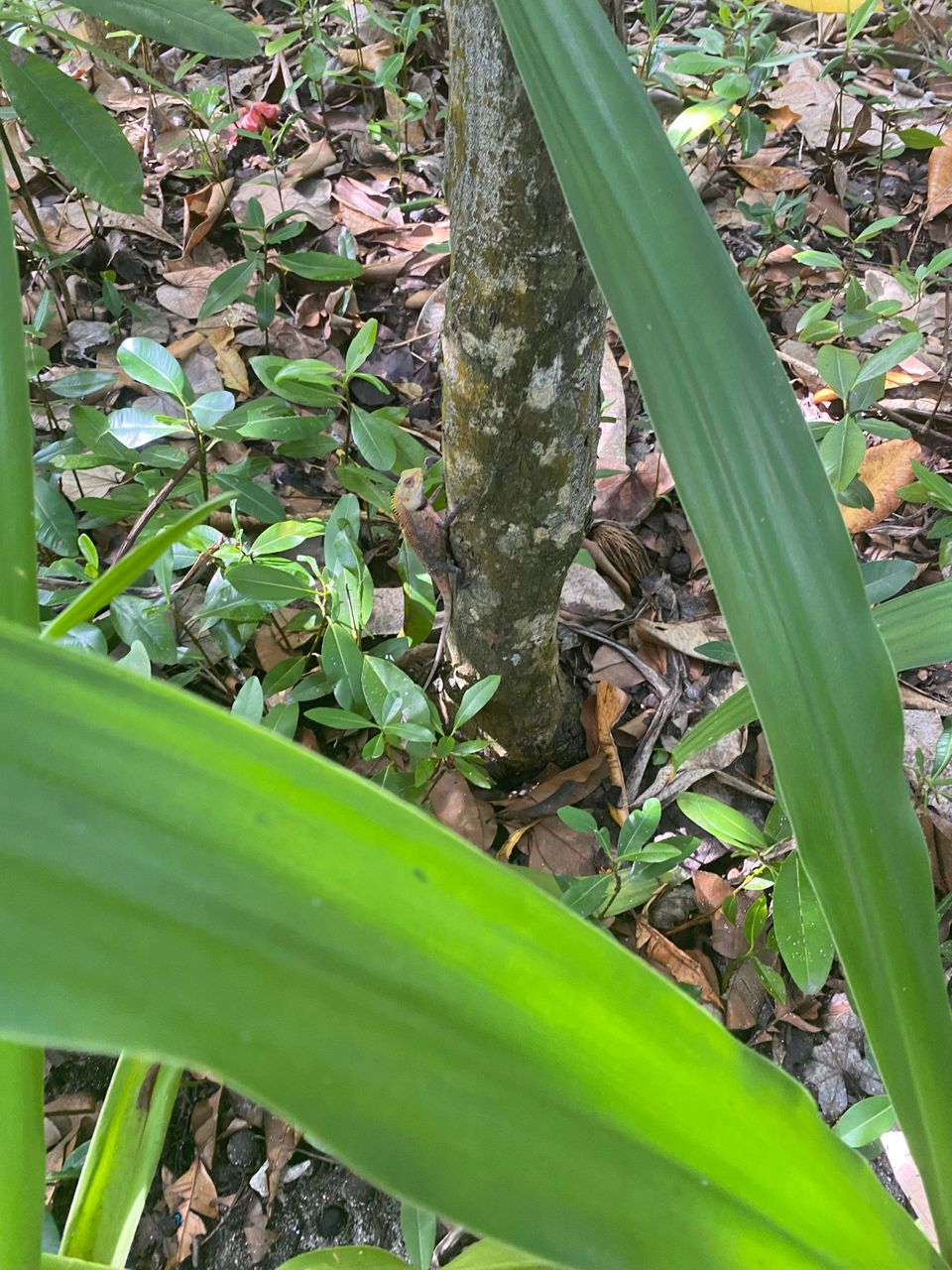 I did stand-up paddling for the first time

And there is also great biodiversity at, Reethi Beach. There are crabs, hermit crabs (we once saw a very beautiful white one) and lizards on every corner. Lizards are really everywhere. Fortunately, the island was very well vegetated, with trees, bushes and palm trees. There was enough shade everywhere (just right for our extremely fair skin). The palm trees were not too tall and were in the minority compared to the trees.

In the last pictures you can see my sister and me standing on the board. I had never tried stand up paddling before. It was really the most beautiful spot I could have imagined for this experience. The landscape looked like a dream. What do you think? I had also imagined it to be a bit more difficult to stay on the board, I only fell in once. You could rent a board at the watersports centre for about 20 dollars per half hour. 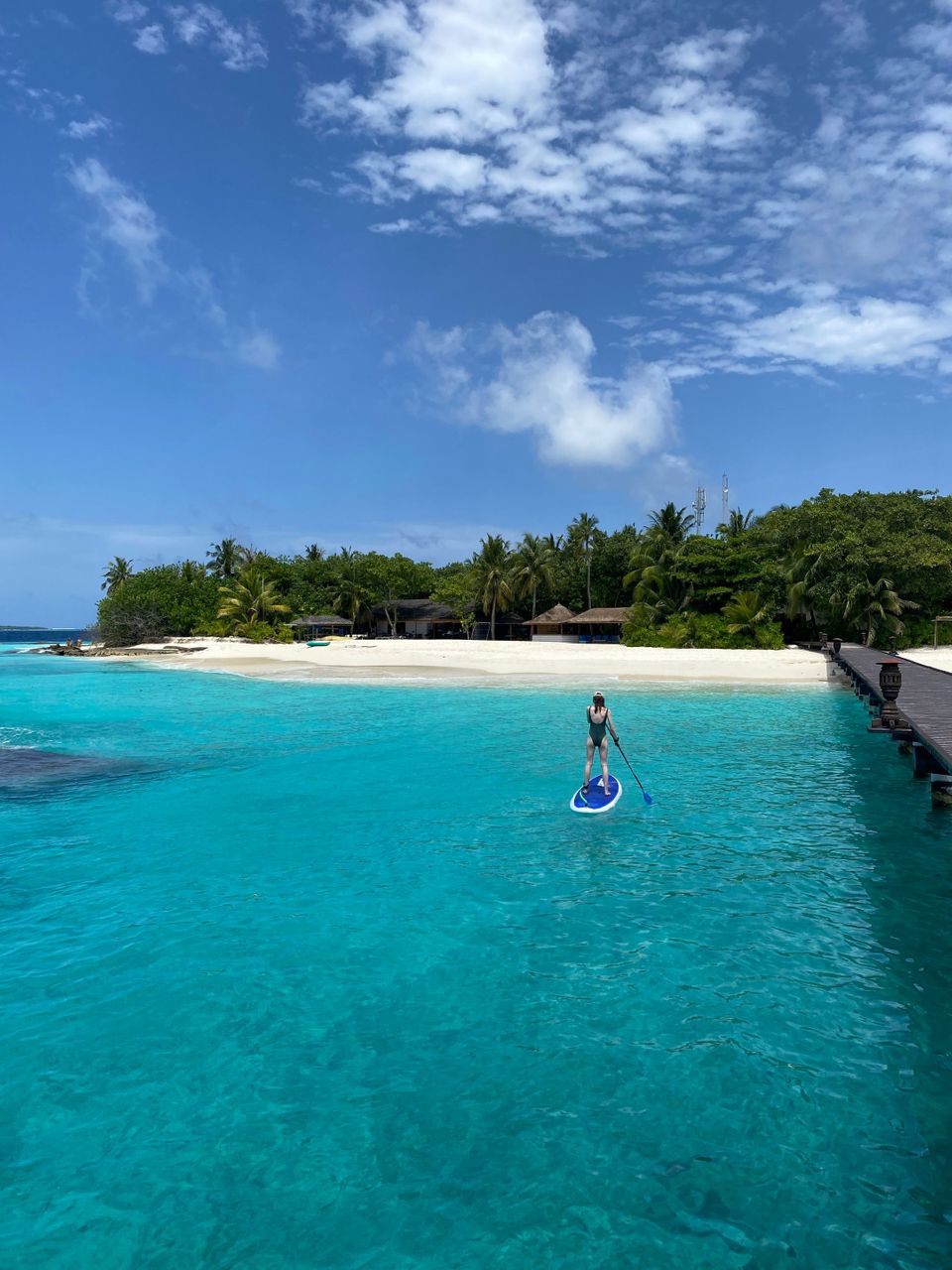 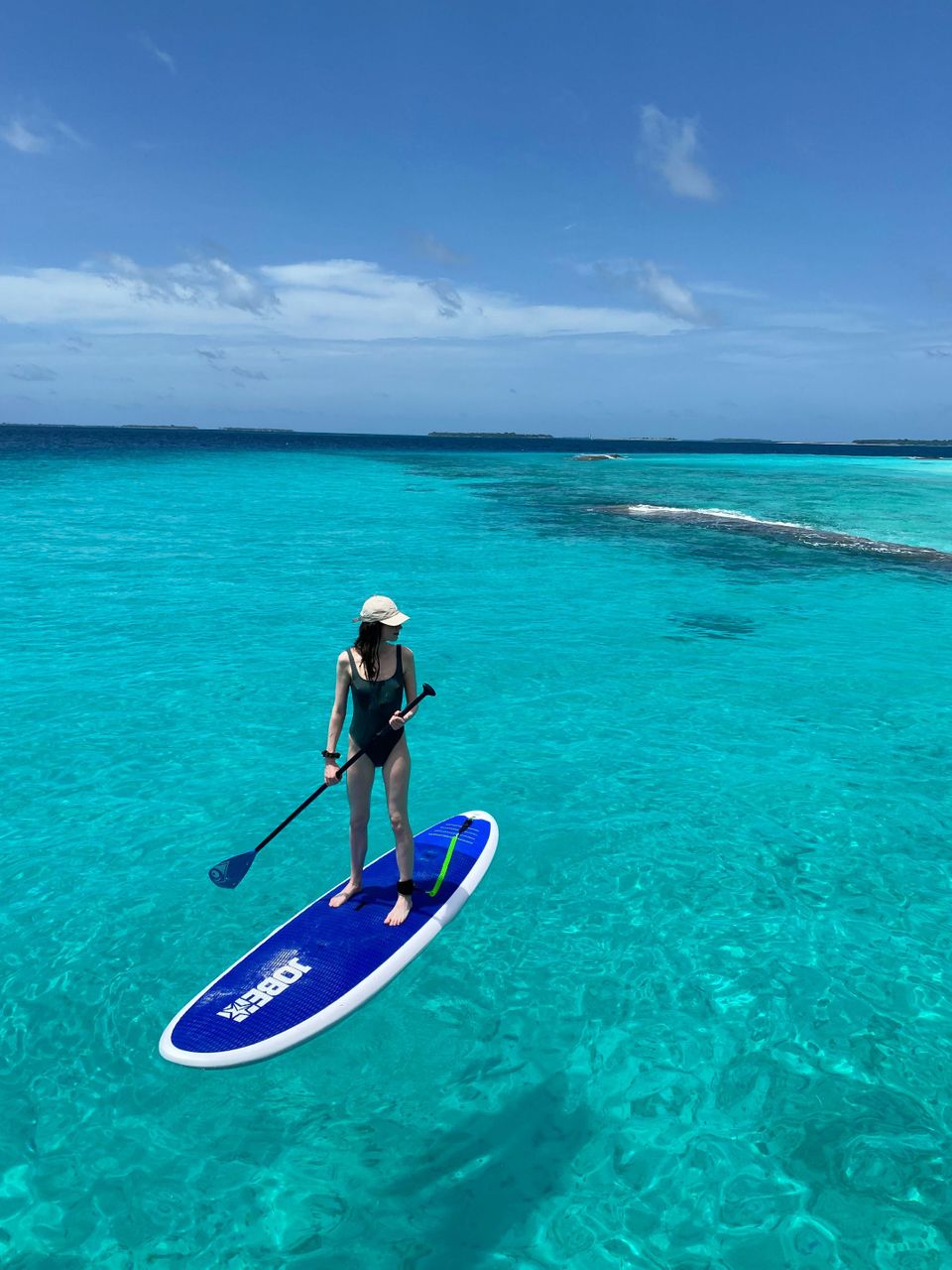 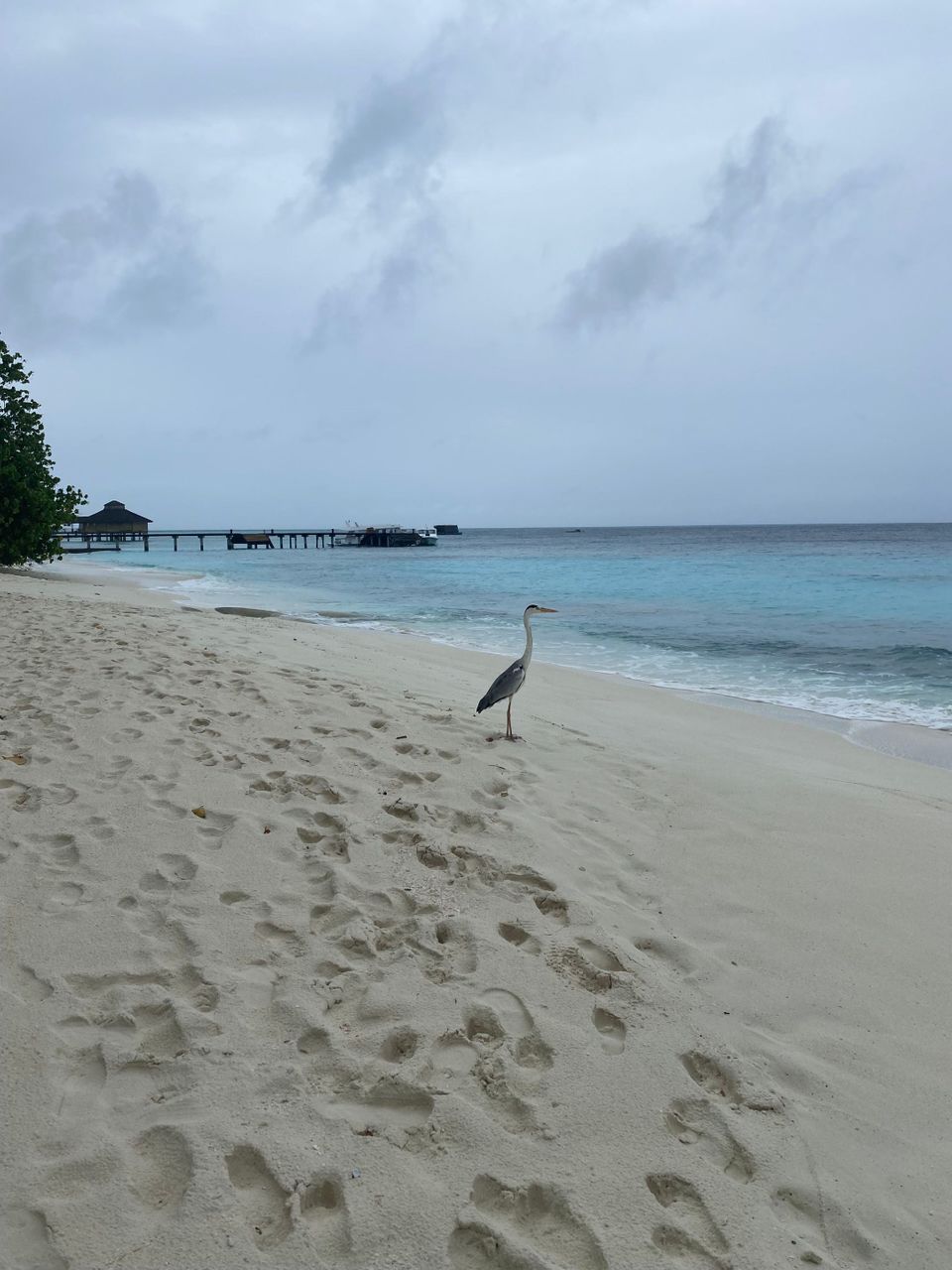 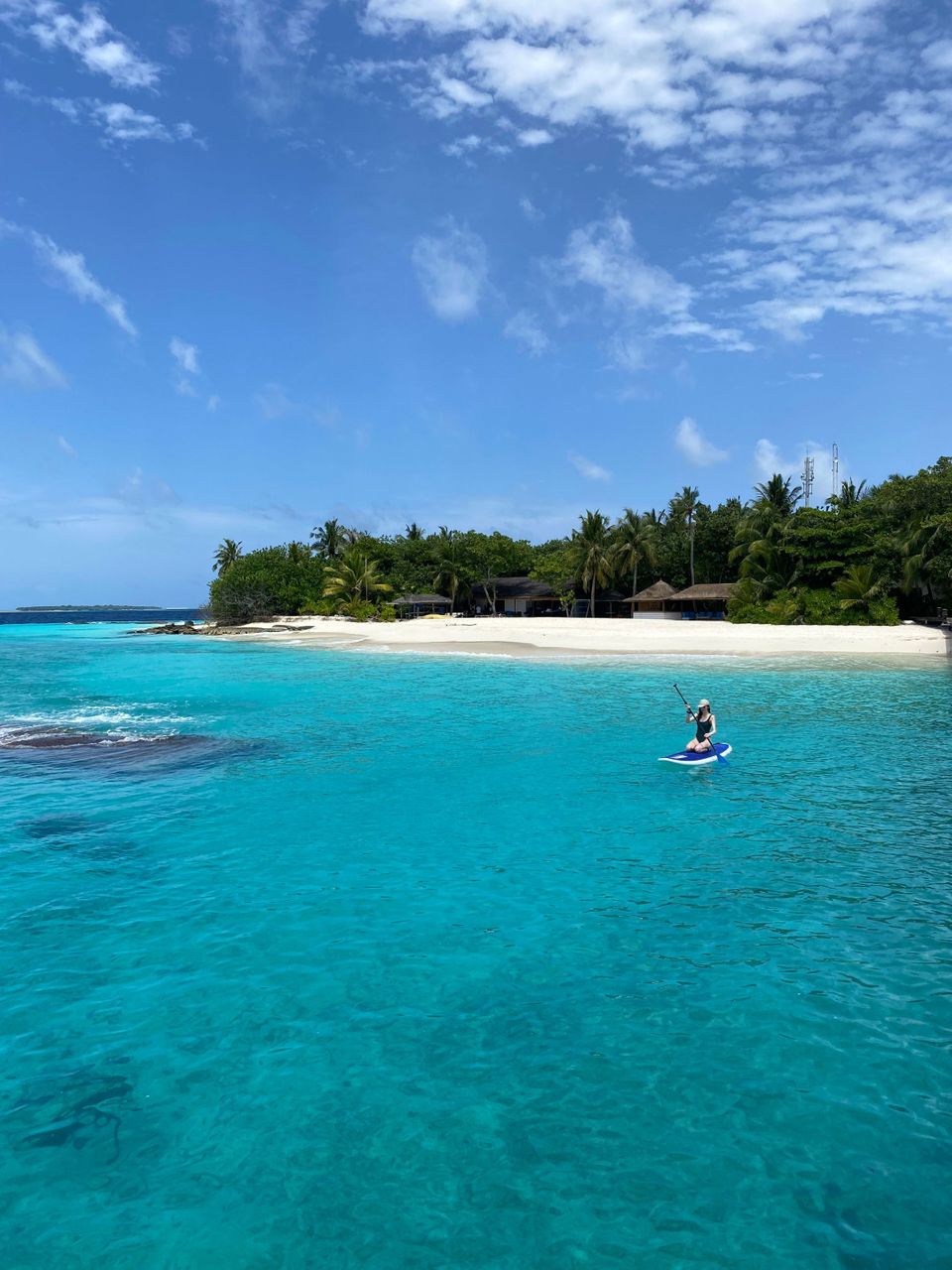 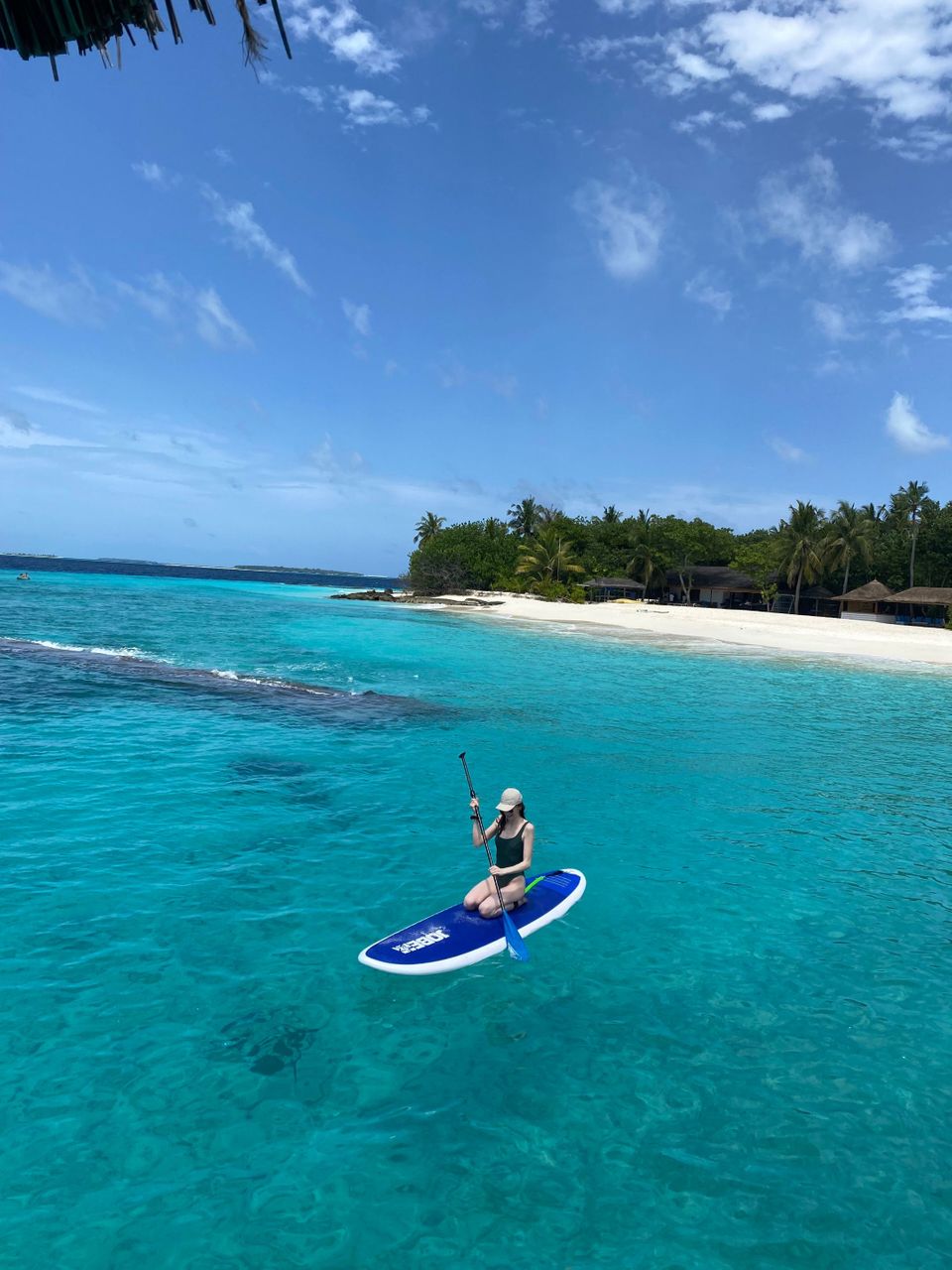 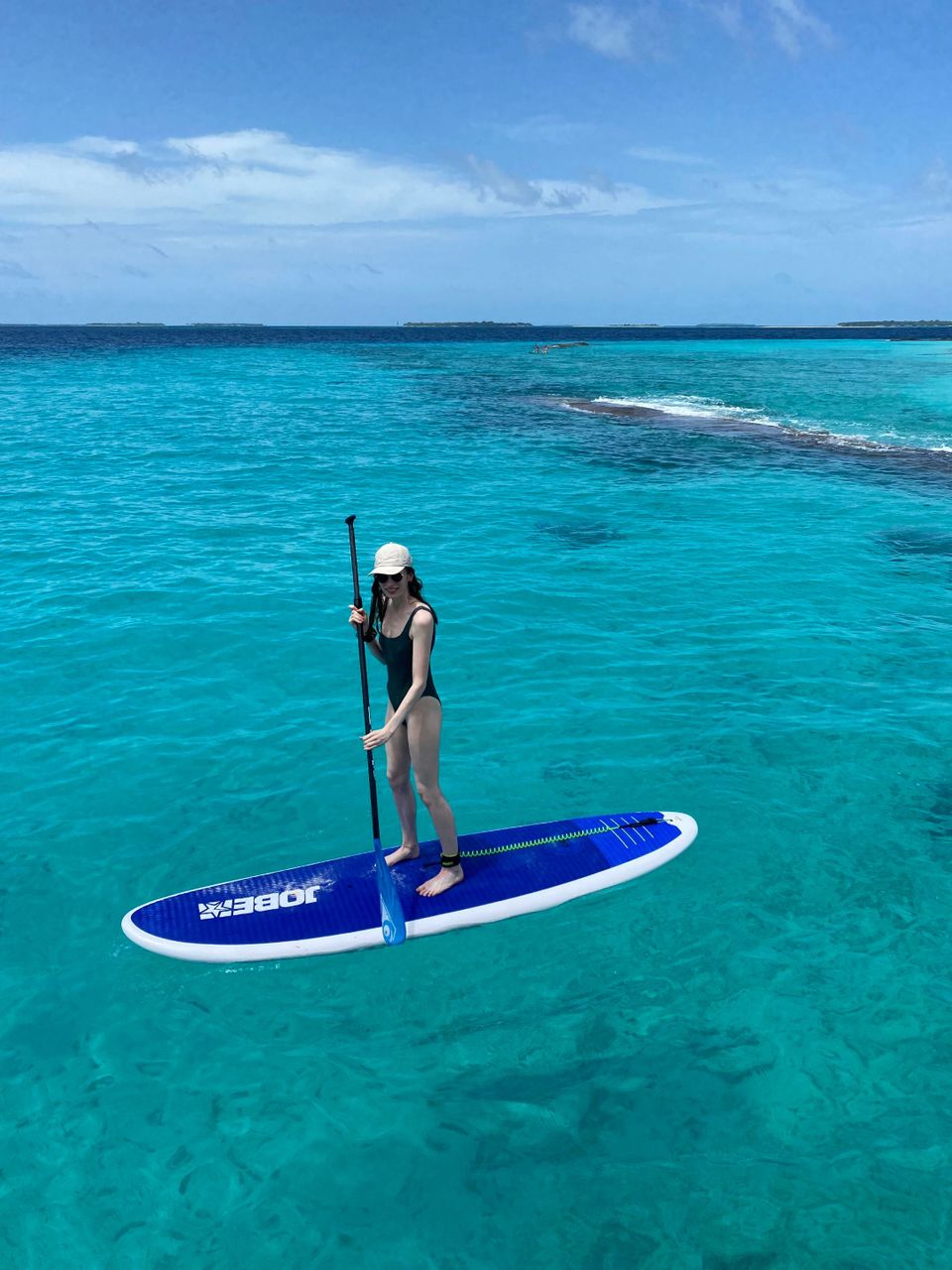 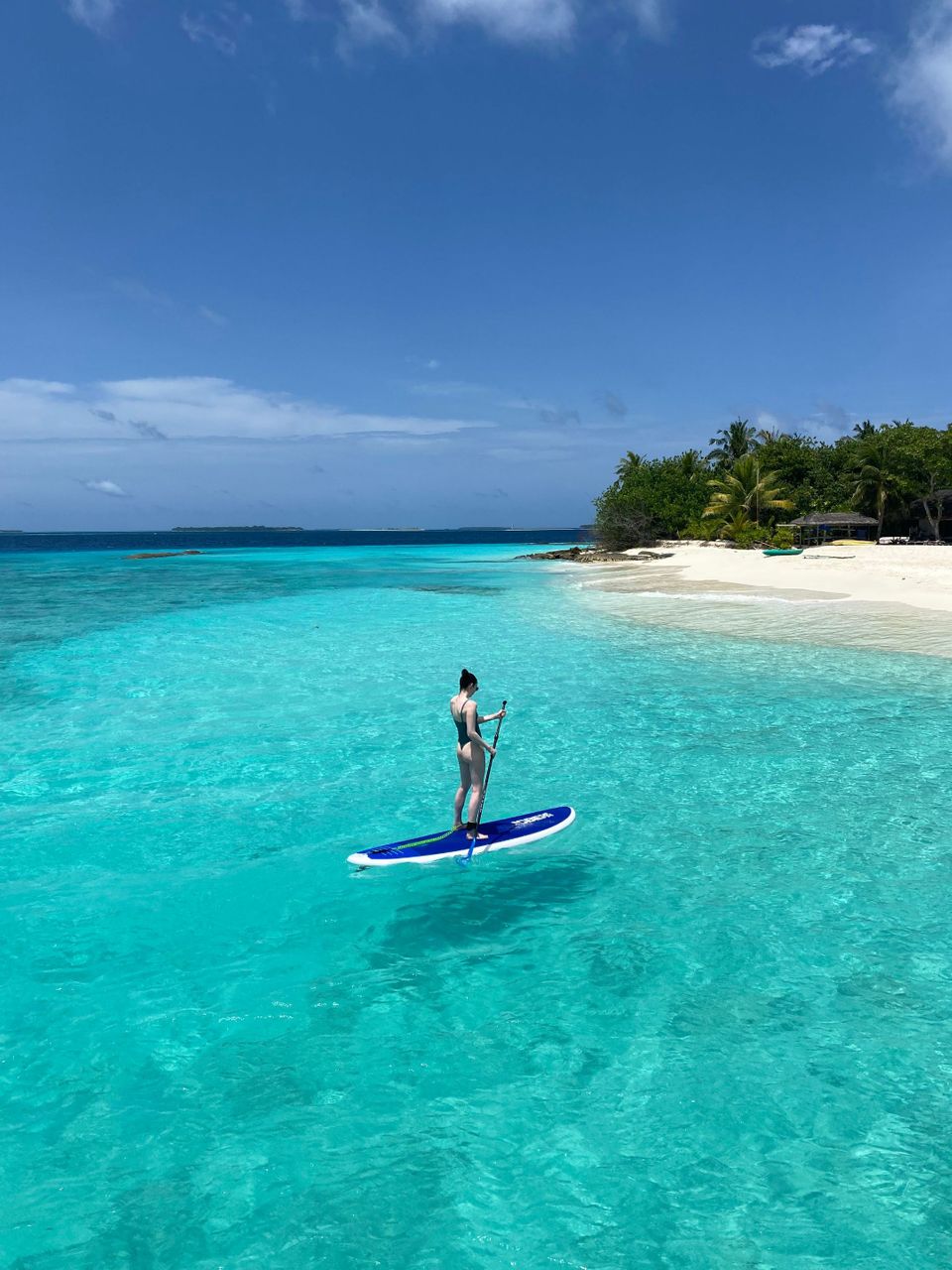 How did you like my introduction to Rethee Beach? I am looking forward to my next posts about Reethi Beach and its underwater world, there is so much to tell! Feel free to write your feedback in the comments. See you next time!