Today I would like to tell you about my best trip to the Maldives - a guided tour where we snorkeled with manta rays. In fact, before we flew to Reethi Beach, we knew that there are "normal" rays on the island or rather in the water. But we didn't know that we could snorkel with manta rays there. That was a great surprise! A short notice "manta call" and off we go

We had the choice, because it was our last day on the island, whether we would rather do the manta ray tour or try the diving for free. The manta ray tour cost $150 per person, not a small amount, but if you are ever in the Maldives you have to treat yourself, it really is a must, I would not want to miss this experience! When we unceremoniously decided to go on the tour, we were glad when we walked along the dive site where you could practice diving, because the exercises were in shallow water without coral environment. Whether the tour took place, was also not at all clear. Because: It is only relatively short notice announced whether and when the Manta tour takes place. More precisely, 20 minutes before, then you have to find yourself in the shortest time in front of the cottage of the "Ocean Fanatics". The whole thing had only the hook that there is unfortunately no Wifi in the rooms (only against fee, which is probably very high). So we sat down (it was assumed that the tour should start around 12 noon) at the reception, then came a message in the Whatsapp group (which is there to give calls when manta rays are sighted and the tour takes place). We quickly got our snorkeling equipment and then it went off. A speedboat took us half an hour across the Indian Ocean. At some point, at the end of the route, some other boats were in sight. In the meantime, the crew had taken calls again and again and told us how many manta rays are just on site. 20, we were told. Okay, that's enough ;)). We stopped at a bay, at the bay Hanifaru. Unlike other tours, this bay is always the starting point to see manta rays. The bay is a real paradise for those who want to see manta rays. I would say the probability of seeing manta rays here in season is very high. We were told that even the world's largest schools of manta rays can be seen here with luck.
And I have to say it was a really unforgettable experience, the most amazing thing I experienced in the Maldives, by far! Compared to the manta rays you feel totally small. Well, I had not informed myself before and thought it would be "small sweet" rays, but they had a wingspan of 3 meters. In comparison we looked very small.
While we were snorkeling, we had to stick to our guide, who showed us the direction with a life ring. I think he knew exactly where the rays were. And we were not supposed to mix with other groups from other islands. Our two guides did a great job. But I also imagine the job to be very pleasant haha.

The butterflies of the seas

The manta rays are incredibly peaceful creatures as I perceived it. Swimming with them was really nice. We were told not to swim so close to them and not to dive down to them from above, so directly above them. But you could get close to them. Just best not too close. The manta rays themselves were not shy at all. They passed us, touched us partly (their sting is not poisonous, but attacks were observed partly when people came too close). One passed me right, one left and the others below and above. It was a great feeling. The mantas are not called "butterflies of the seas" for nothing.

Unfortunately we didn't see a whale shark, but it wasn't whale shark season either. And it didn't bother us. A staff member had shown us a photo of his dive on the day of our departure, on which he and a whale shark could be seen. It looked great. But that for next time ;) 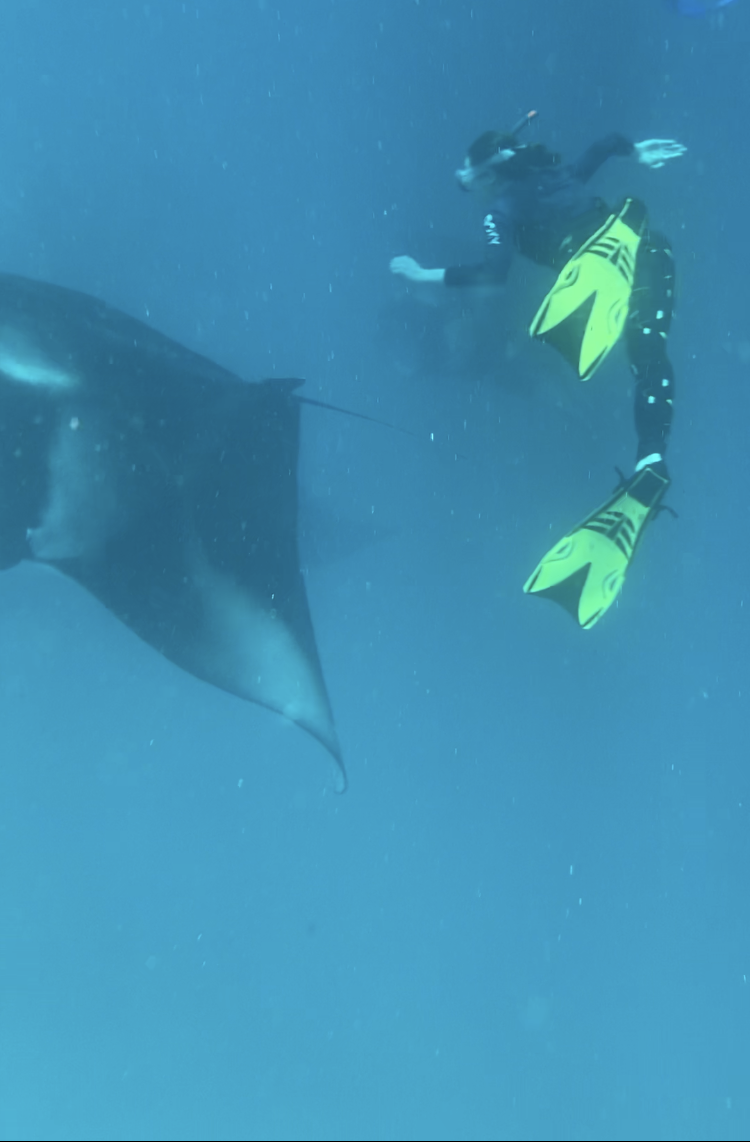 Everywhere, below, right, left, above, manta rays - we snorkeled with more than 50!

And now I'll tell you a little bit about the manta rays. The season to see manta rays at Baa Atoll, about 150 km north of the capital Malé, goes from June to November. So we were right on time in September. The mantas feed exclusively on plankton. And that is exactly why Hanifaru Bay magically attracts the animals. Because especially in summer, the bay has a lot of plankton to offer. it is even one of the largest places where there is so much plantkon for the manta rays. We could marvel at more than 50 manta rays that day, as we were told afterwards on the speedboat back to Reethi Beach. Of course, this was not clear to us at that moment. But that it had to be a lot, that already, because everywhere where we swam, manta rays were among us. There was hardly a time when we had to look for them. Only at the beginning when we jumped from the boat into the water, we had to briefly look out for the manta rays. But while snorkeling we didn't even know where to look first. Hanifaru Bay is a marine protected area. This is partly because it is also a popular breeding ground for sharks and stingrays. Unfortunately we didn't see either of them, but definitely another time ;)
The manta rays themselves have already been listed as endangered by the International Union for Conservation of Nature. That's why the guides don't take everyone and you have to book in advance. One thing I can tell you, it is an experience that I will not forget so quickly! How did you like the post? And would you like to snorkel with manta rays? Many of my friends, who have seen the videos and photos later, have said that they were much too afraid. But the animals are very peaceful if you do not come too close, you do not have to be afraid, but a little bit certainly does not hurt ;) Write me your feedback gladly in the comments! Until next time:)