A sign of peace in the Florence of the Elbe

my last post was about Bremen - today I'm going to a completely different part of Germany, to the East - to Dresden. Right at the beginning I want to give you a little introduction to the East and especially Dresden, so you can get a better impression. There are many differences between West and East Germany, historically. Dresden is the capital of Saxony and has more than half a million inhabitants. This makes Dresden the second largest city in Saxony, only Leipzig is larger. Dresden, the "Florence on the Elbe"

Dresden is also beautiful because it is located on the Elbe. The river that also flows into Hamburg. The city is also known for technology and science. The Technical University of Dresden and the University of Applied Sciences, for example, have a very good reputation.
But today I would like to introduce you to a very special sight in Dresden: the SDK. SDK is the abbreviation for "Staatliche Kunstsammlungen Dresden". Here, a whole 15 museums have joined together. Some of them belong to the most important exhibitions in the world. Because of the many art treasures and the rich history Dresden is also called "Florence on the Elbe" - very appropriate, isn't it? Also the architecture is, as you can see from the Frauenkirche, which I will tell you more about later, very influenced by a baroque and Mediterranean style.

The famous art collection SDK I would like to introduce you in a next post, today it should only be about the Frauenkirche - because it is the landmark of Dresden and historically very important. 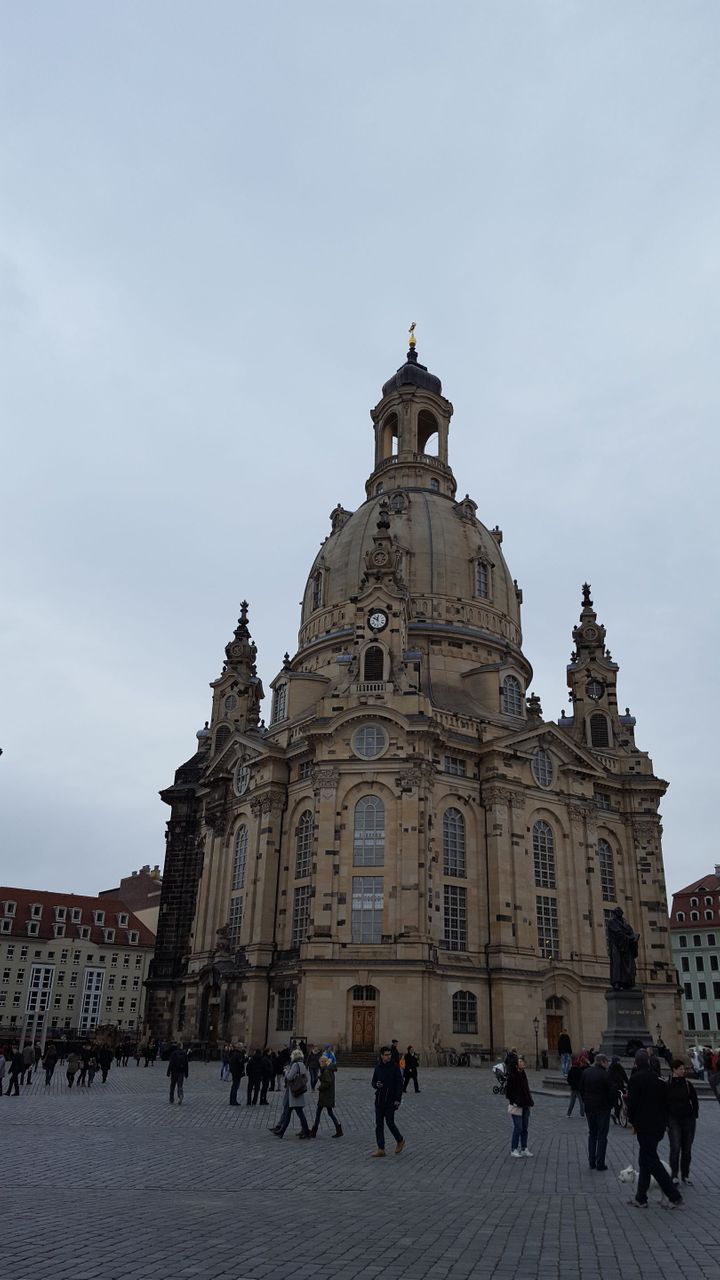 The Frauenkirche (you can see it on the pictures above) is located directly at the Neumarkt in Dresden.
The Dresden Frauenkirche is a sacral building, which was built at the beginning of the 18th century. The dome became known as the "Stone Bell" because of its striking appearance. It is also very conspicuous in the city skyline.
During the Second World War, the Frauenkirche was destroyed. It stood only one day after an attack and then collapsed. This was due to the fact that the church was built of sandstone. This could not withstand the high temperatures.
The church was not rebuilt immediately after its destruction. Instead, it stood as a ruin on the square for decades. Around it, the debris was a reminder of the Second World War.
Thanks to the people of Dresden and donations, not only from Germany, the Frauenkirche was rebuilt exactly according to its "predecessor version". Gradually, the church was rebuilt after the fall of communism. Today it stands for tolerance and peace and has become a well-known landmark.

The Frauenkirche is built in the Baroque style (like many of the buildings in Dresden). It very much characterizes the Dresden Neumarkt. And this despite the fact that, strictly speaking, the Frauenkirche is not located on the neumarkt square, but on its own square called "An der Frauenkirche". This is a side square of the Neumarkt and spatially delimited. In its center stands the Frauenkirche. Sandstone was also used in the reconstruction of the church. The church is considered one of the largest sandstone buildings in the world.

What do you think about the Dresden Frauenkirche? And if you've been to Dresden before, how do you like the city and its history? I found the city very impressive, especially because it has such an interesting history. At the moment the church is open only limited, otherwise it is known as an "open" church. It is therefore open to Dresdeners and tourists as a "city church". There is no church congregation of its own.

Feel free to write me your feedback in the comments. See you soon!