I suddenly see a different perspective about myself: I am anti-LGBTQ, I am anti-BLM, and I am anti-pretty much any identarian group...

Hell I am anti-White Lives Matter too.

I am evil person who must be cancelled immediately... 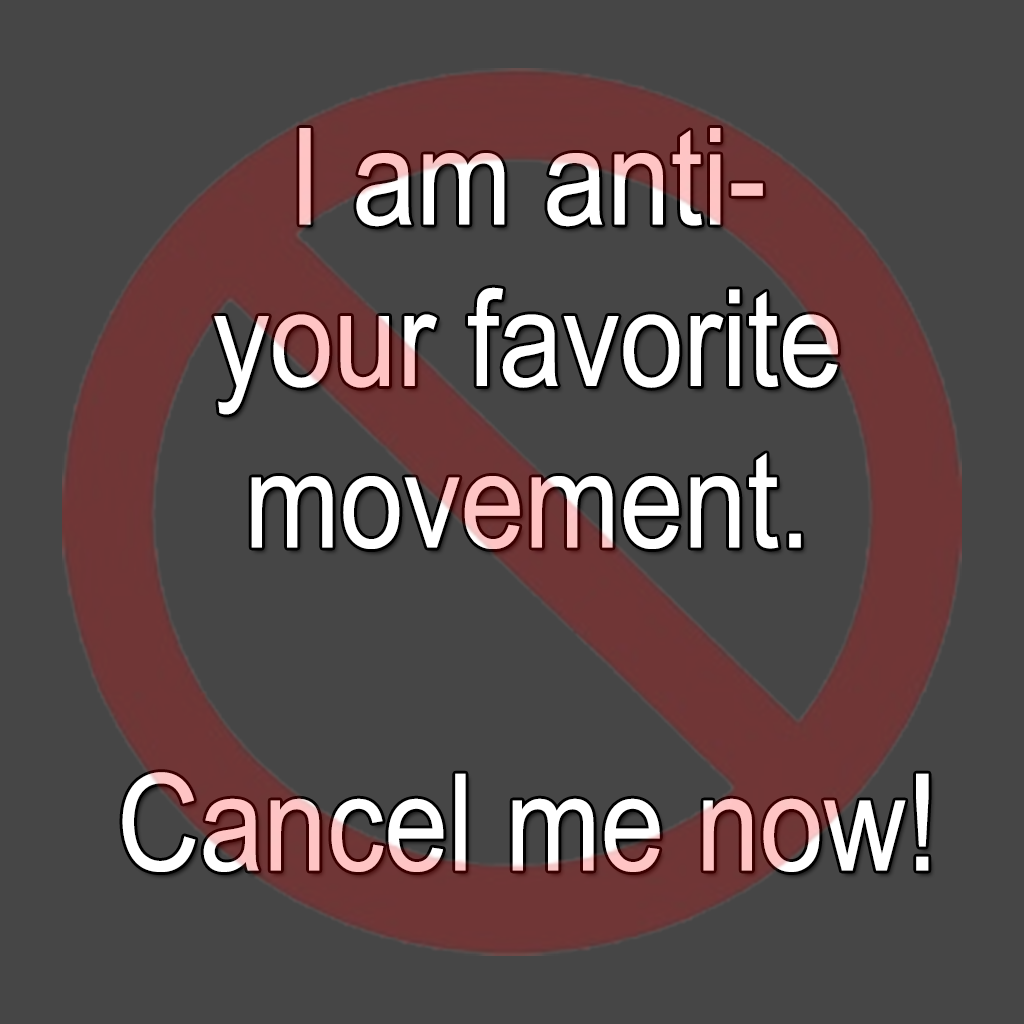 If I am anti-LGBT then I must hate gay or trans people and think they need to be held down right? I don't think my daughter that is a Lesbian would appreciate that. She would also tell you I am nothing of the sort.

I am very much anti-LGBT though. How can that work? (I'll get to it)

What I am for is equality. I am for humans. I am actually anti-segregation. I think desegregation was the right thing to do.

With that in mind why would I support any movement that is intentionally segregating people based upon some trait?

I don't care about your sexual preference.

I don't care about your gender.

I damn sure don't care about your pronouns.

I don't care about your skin color.

I do care about you as an individual. Not as some part of a group.

Those things matter only because you are stereotyping/generalizing and choosing to segregate.

If you actually are seeking equality that is the wrong direction to walk.

I am talking about being treated by other humans the same as they would treat any other human. You still will be responsible for your choices, and your actions. Not all of those are equal. If I bash you for what I consider a really bad choice that doesn't have anything to do with the various groups you might want to segregate into. It simply has to do with the choice, and/or actions you make.

"I look to a day when people will not be judged by the color of their skin, but by the content of their character."

Yet it can go further than that. The same is true of your gender, your hair color, your eye color, and your sexual preference. None of that matters. What matters is your character... Are you a good person? Are you an antagonistic person seeking to find things to have strife over? Are you busy destroying, or are you creating? Who do you admire? Are the people you admire thugs and generally people with bad character?

These are all things each of us should be asking ourselves. You see while I am for equality, that also includes equal treatment when people make what I perceive as stupid choices. You have the right to make your choices, and you are responsible for them. Any of us have the right to speak out about choices we think are stupid. That doesn't mean people have to agree. If you want to be a positive role model and get people to act a certain way then rather than trying to force them and attack people that don't comply lead by example. Show them how good your way actually works out... If you were right others will likely take up some of your ideas.

Not all cultures are equal. They also have nothing to do with race or skin color other than the fact many cultures are MORE COMMON with populations that share certain traits. That doesn't make the culture tied to those traits at all. Cultures are simply ideas, and ways of doing things. People can adopt them, adopt parts of them, and change them.

If you need proof that not all cultures are equal:

The key here is that while all cultures are not equal. There can still be good parts to them if there are also bad parts. You don't have to take the entire culture. You can take just the part that is appealing. That is one of the big differences between culture and things like skin color that you can't change. Your culture will change throughout your entire life.

Many times people go to the segregation route when trying to attribute blame for a perceived problem to some statistics.

Black Lives Matter being formed around the disproportionate negative interactions with law enforcement with black people is a recent and powerful example.

I can tell you now if you compare the results, and you take into consideration that it is NOT just happening to black people though that is where the attention is being put, you might find a better fit than skin color.

I have for some years now been viewing this as a culture problem not a skin color problem.

If the culture you are choosing to follow admire thugs, and holds thugs up as heroes, while also talking about attacking and resisting the police, and while talking about drugs as a good thing, and gats, and hos, let's call that group B.

A = not thug fans

If both A and B are stopped for similar crimes which group do you think is more likely to have a bad interaction with police due to their culture?

I think it is easy and pretty obvious. I also think it is a far better fit than skin color for the issue Black Lives Matter claimed to be fighting. Why? This culture which actually got it's roots in the Irish Ghettos (according to Thomas Sowell) is very common in black communities. Not all of them. Thus, it is more prevalent in the black population.

However if you take a white person that is of group B they are likely to have exactly the same experience with law enforcement.

If you truly want to solve this problem which goes way beyond cops it also is a big part of what fuels the black on black crimes, black on white, black on asian, etc in many of these neighborhoods as being really high. Not to say that there are not also white on white, white on black, white on Asian, and every other combination. It is simply the ones involving black people are HIGHER for all of those. Since BLM likes to talk per capita. Per capita crimes and homicides are far higher in the black population.

Is it a skin color problem? No.

Then why do I keep mentioning black people?

It just so happens the cultural traits that are leading to these issues are more common in black communities. Just like head hunters could stop hunting heads, and slavers could stop engaging in slavery so too can people stop admiring thugs and ganstas.

I suspect if that one change were to occur the statistics that spawned BLM would vanish into the norm of all other colors.

I raised my children telling them to surround themselves with people that had the quality and traits they themselves wanted to cultivate and be good at. None of those traits were about skin color, sexual preference, or gender.

They were about thug, drugs, hard working, disrespectful, respectful, smart, dumb, destroyer, creator, etc. I told them if you hang around with thugs odds are pretty good you are going to act like and become a thug. If the person is a friend going down that route and you don't want to abandon them then lead by example. If they truly are your friend perhaps they'll give up being a thug and join you. Then you'll be a positive point in their life as opposed to a negative or an enabling point in their life.

Part of being brave is being afraid and doing it anyway. You sometimes have to risk someone not liking you in order to make the right decision for yourself. Be brave and do it.

Now to sum all of this up since some people CHOOSE to get triggered by it...