Hivechess Tournament Round 2: @jaki01 was the winner!

the second round of S7 was a 5+0 Swiss tournament with 16 players. Quite a few players had connection issues this time, which is quite annoying and adds a new kind of lottery. I hope next time it will be better.
At the end finally @jaki01 was the winner again (his last win was in season 4 only), followed by @eniolw and @kreur. Congratulations!
We had a completely new participant, @cryptoph0823 who in his first appearance got already 3 tournament points due to his 8th place, congrats as well.
Despite some strong players like our chess brothers @vjap55 and @sawko were missing, I landed only on the disappointing 7th rank. I had again the "luck" of having one of the highest opponent rankings, but I also didn´t play well. 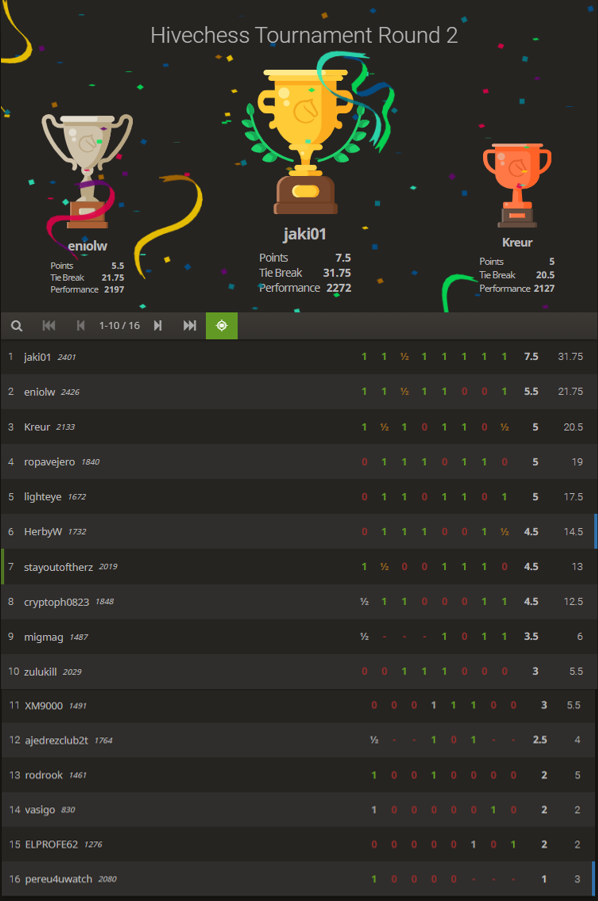 The games of this round can be found here, in case you want to replay some of them.

Today´s results created quite some changes - in this season everything seems possible. @jaki01 has currently the best chances with his comfortable lead, behind him there is a group of 4 players with the same points.

The rules you can look up in the announcement post.

See you next week and as always - keep practicing!