the first round of Season 6 (I couldn´t find a proper name so far) was a 5+1 Blitz round with a record-breaking 18 players! But it turned out that one of them, Limlok is a cheater (confirmed by Lichess already). @yazp (zulukill) played only 1 game and is not counted as well according to the new rules!
At the end @vjap55 could win (like in the last round of S5) with 5 points distance to the second, @eniolw and our champion @sawkito as very close 3rd. What a surprise! What is surprising too is that the winner had not a single time to play against the second or third (the by far strongest players rating-wise). The second had a similar easy pairing, so this might partially explain the result.
@amirl (amirl-from-hive) could gain the 4th rank, followed by @jaki01 on the fifth rank only (actually one of his worst results ever, despite he had played very well, having strong opponents and a performance of 2400!). @schamangerbert (HerbyW) with the 6th spot got a quite good result in this strong field, one point ahead of myself. The remaining tournament points went to @maverieux000 (Keylix) (8th), @pereu4ivatel (pereu4uwatch) (9th) and @lighteye (10th). @rafaelaquino (ajedrezclub2t) got the unlucky 11th rank.

Overall, the pairing seemed this time especially strange. Maybe 60 min is too short for 5+1. With a little more time those inequalities would be less, what do you think? Would you be open to more 70min arenas?
Also due to the cheater a few players (including myself) lost some time, so I hope such occurrences won´t happen in the future. 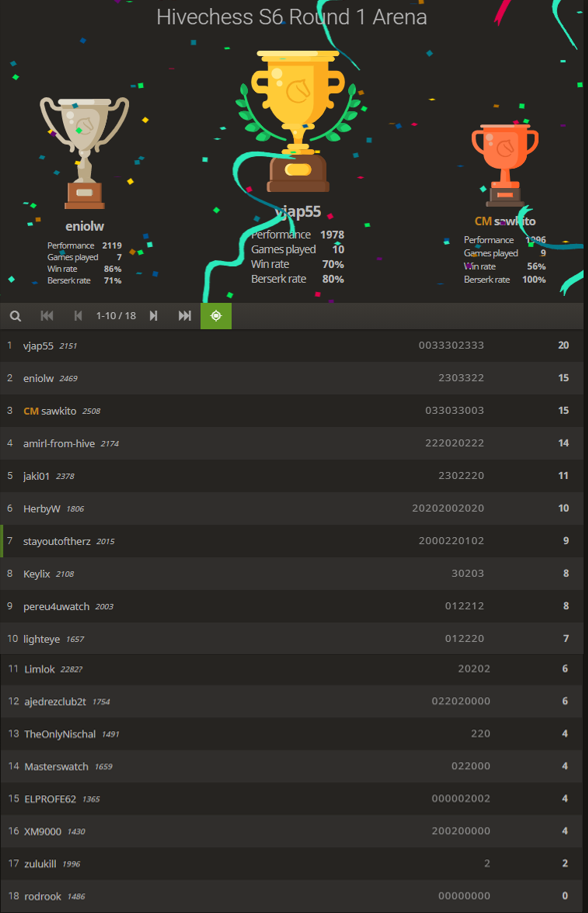 The games of this round can be found here, in case you want to replay some of them. Please note that on Lichess Limlok was already removed from the results table (unlike in the screenshot above which I took directly after the tournament)!

The rules you can look up in the announcement post.

See you next week and as always - keep practicing!