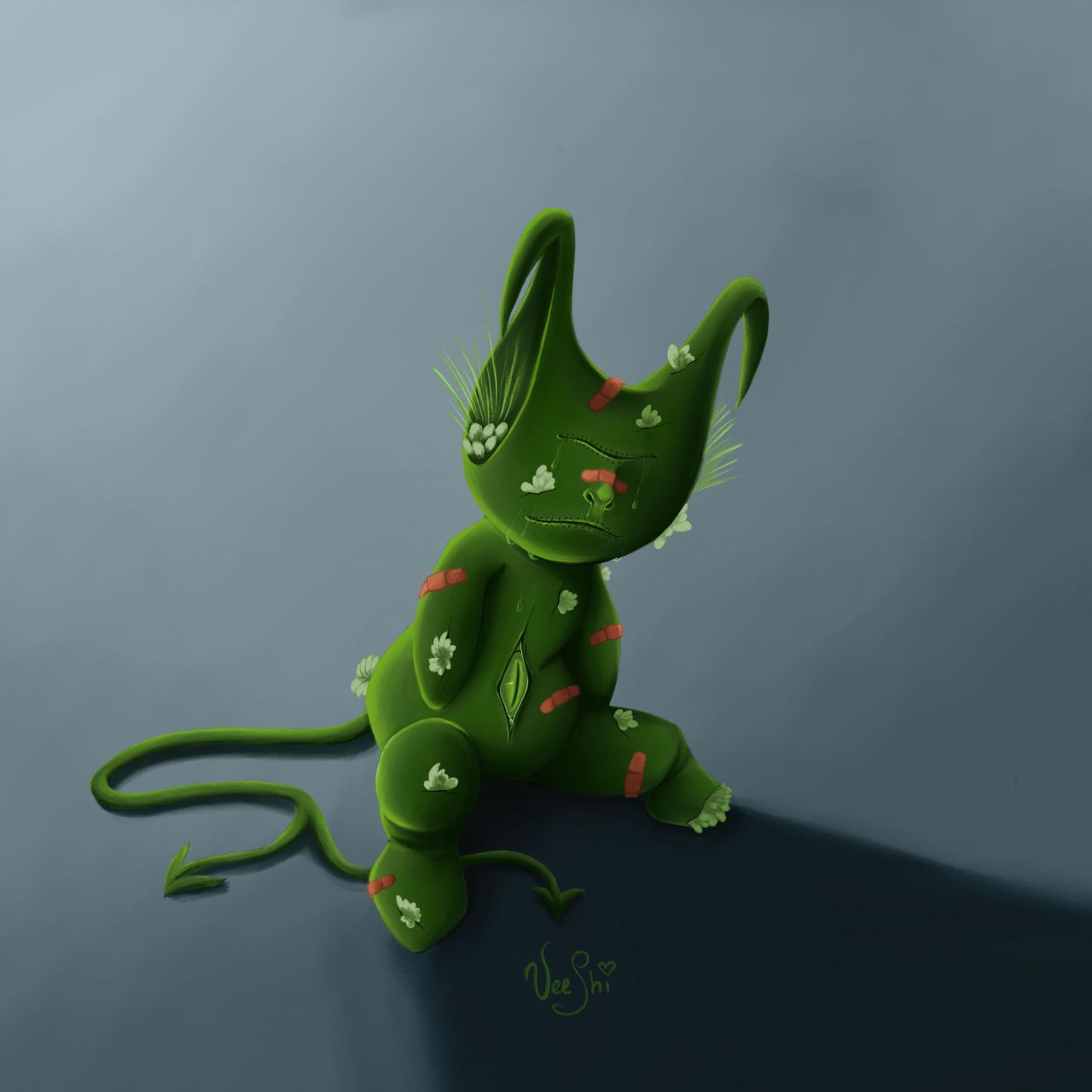 Entangled gave me a breath of fresh air. I realised that the monster can be my medium, my tool, my way to tell my story. So i let him be. I let him come to me in images of how i was feeling. Besides me telling my stories through him, he also became my tool for reflection.
A short while after I finished entangled, i felt empowered to draw. To put all my thoughts and emotions into this green fluffy character. anything that happens around me and within me.

The new image came to me. It was an image of broken down green monster.
Bandages and stuffing everywhere. He was vey tired. I was very tired.

Those 6 months in England took a toll on me. And I finally started to realize that. I finally saw all that chaos that was unveiling around me.
Even though we were broken up, we still stayed together, waiting for my departure day to arrive. Maybe that was a wrong decision, I was judged by some people about it. Asking me “How and WHY did you stay if you guys broke up?”. My parents were furious when they heard the story, telling me i should have left the moment we ended. But at the time that wasn’t an option. I didn’t want to come back home at all at that time. Overall returning prematurely never even crossed my mind.
Regardless of how my stay in England became my lowest of lows, at the time i still saw everything in rose colored glasses. And somewhere inside me i still had the thought and feeling that we might be able to heal and fix this relationship.
And we even somewhat mended for a while. It was a family event, and we decided not to tell his family about the breakup yet, and somehow it gave my naive brain hope. Hope that this relationship has a chance.

Most days were actually good, and coming from such a long time in a long distance i believed the communication was our strongest feature. However i didn’t take into the account, that one of us had a tendency to bottle up feelings and thoughts. So every time we drank, all of his emotions would come out with a force of a tornado. All the pent up feelings will fly at me like daggers, and none of them were towards what i did wrong, none of them were something that i could work on or fix. “I can’t listen to you” “I don’t deserve you” “I want you to be happy”
Those are such confusing things to say to someone. If i chose you means we deserve each other. If i chose you, means i am happy with you. But i didn’t have a power to change his thoughts or opinions, no matter how hard I tried, as a lot of times he saw me as an “evil” version of myself, that didn’t exist. He was with a completely different me. And regardless of how honest and myself i was, it never reached him. 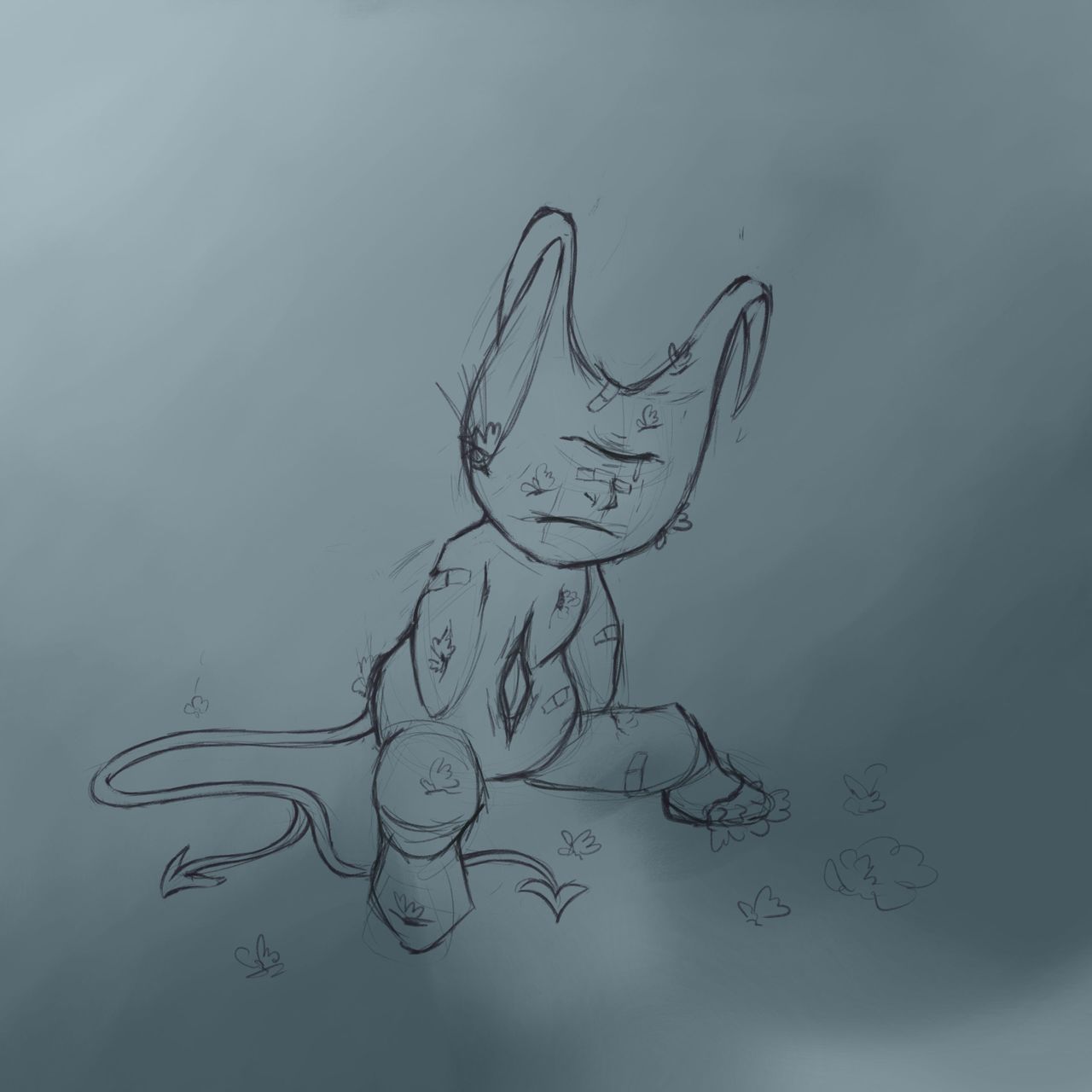 Drawing wallowing came from a point of tiredness. A point of realization of my wounds and my overall state, but it was also a point, where i started to heal. All those bandages and all the stuffing lying around was a showcase of all the places where the healing needed to be done.

I was hoping to find more of my past feeling and emotions in the journal i kept at the time. But i have found nothing. It was a black hole of time. A pseudo-blissful blur. My only joy came from the green monster. It was that comfort and energy that i was lacking through my life, and especially in England. Comfort and energy that was coming not from friends, or an external source, but from me. That was the energy that pushed me to the place I'm at now.

“After going to so many places, being tangled in ropes, it all hurts. I lost my fluff and all my will. I just want to sit down here and wallow. Maybe I will take a break right here, I can’t stand up anyway.”