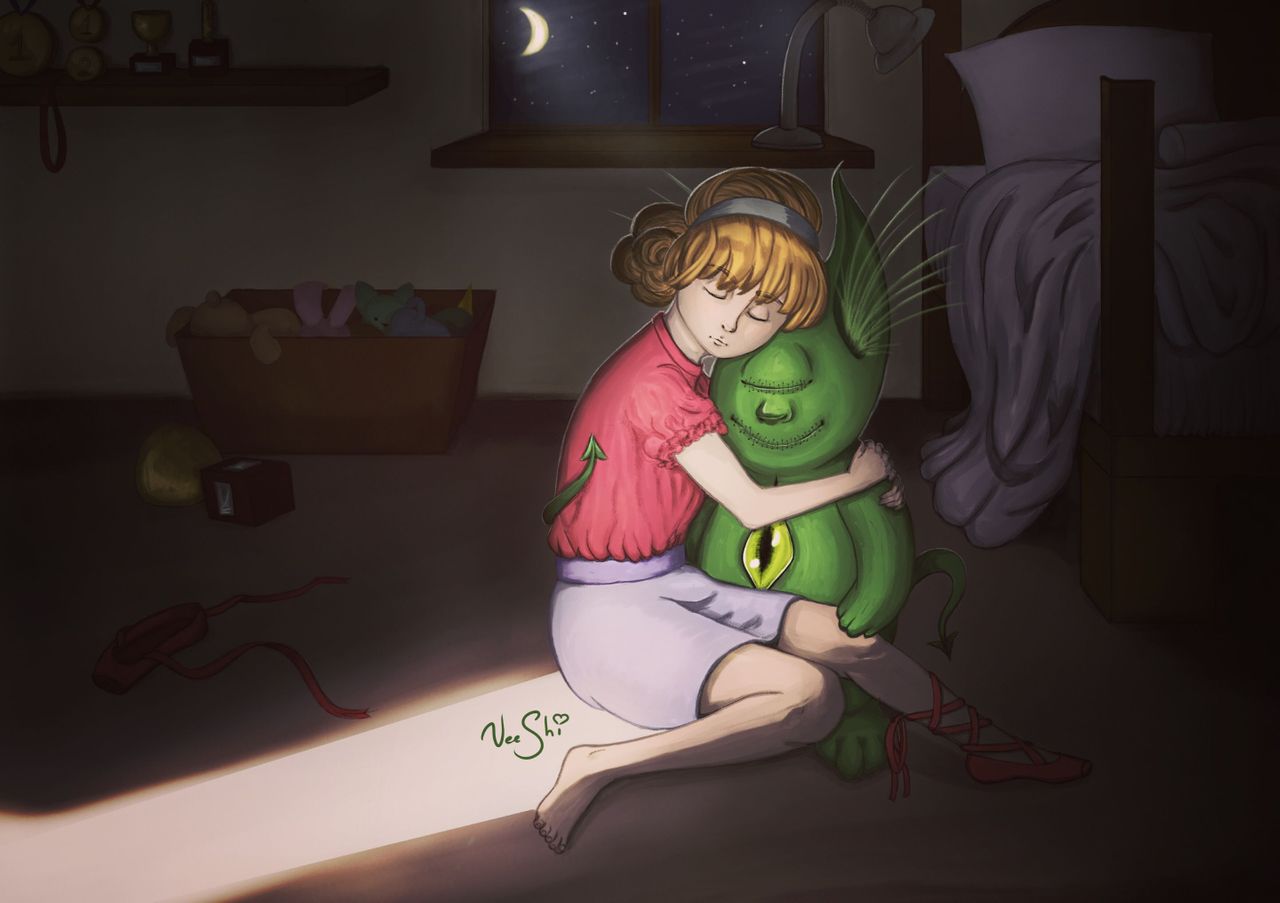 We finally arrived. 3,5 years after the birth, Green Monster came to me again. This time my life was different. I was no longer in school, i was in university. In Malaysia. I was studying animation, as I believed, animation was a way to learn all the aspects of filmmaking at once, and get a huge drawing practice as a bonus. Im pretty sure, i still stand by that belief, i just don’t see myself in filmmaking anymore at the point of writing this. Maybe one day in the future it will come to me, but not now.

At the time my life was different from before, even much different from where i am now.
I finally found a person i loved, who i had been with for more than a year in a long distance relationship. We even got engaged, so we could be together, no more separated by tens of thousands of kilometres.
But i couldn’t leave the school right away, and fly to him, I had to finish the whole semester of university. And as I missed quite a few of my classes, while daydreaming, i had to work extra hard to finish everything within the deadlines.

Multiple assignments involved animation (of course), and one of them was swinging tail sequence. We were given no limit on the character we draw, only requirement is that the character has a tail. After short deliberation, putting aside most common choices, such as foxes, cats and rabbits, i decided to animate the green monster. And i felt the ease again.

I have a confession to make, the only reason my green monster is green in nature, because my favourite colour, through my life was and is green. Im semi obsessed with it. Maybe one day i will end up on one of the shows, where they look at “weird people”. I saw some people being fully surrounded by blacks, pinks, pastels and i will be “that girl that is obsessed with green” 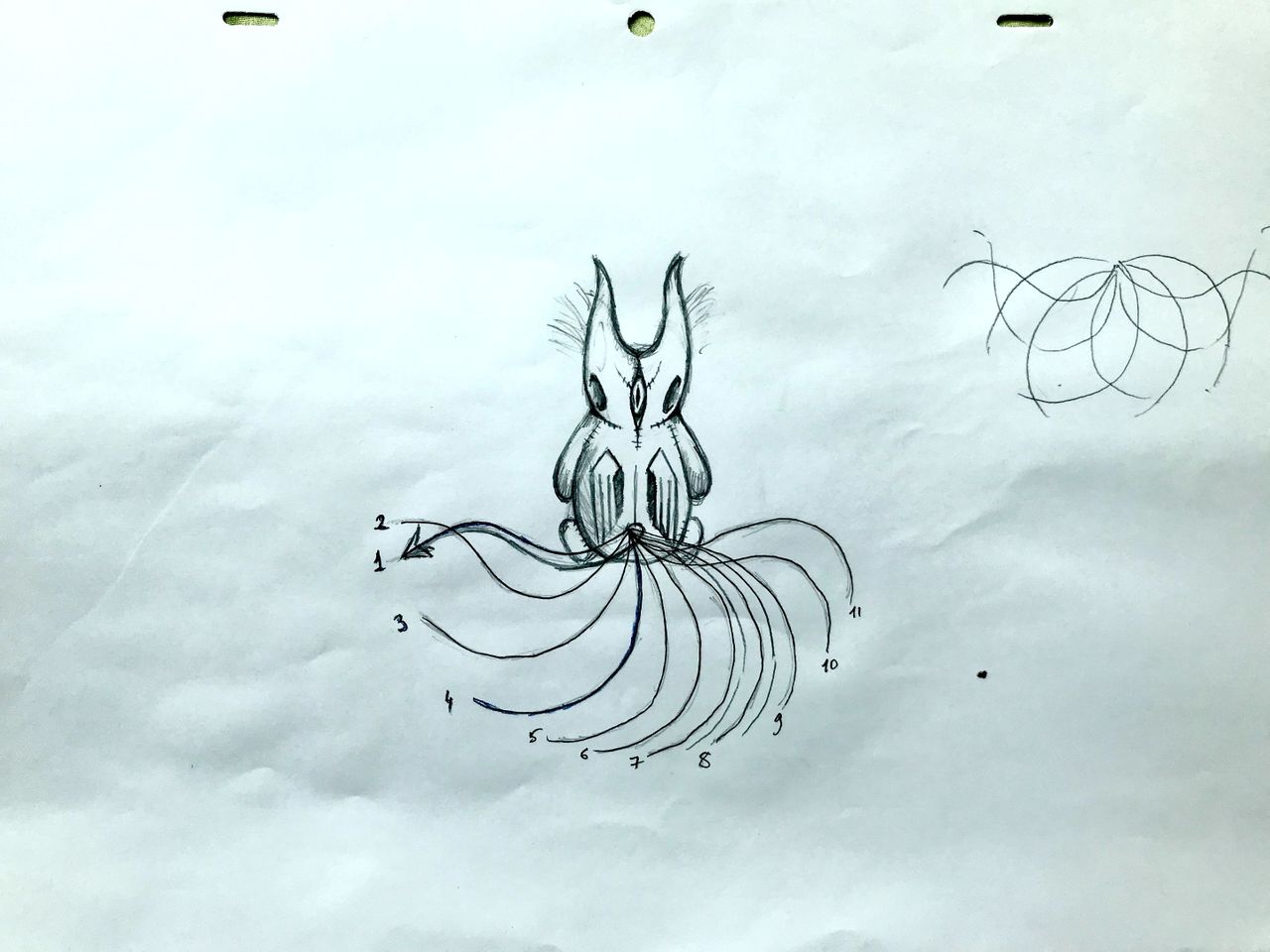 But the colour might have added to the feeling of ease that i experienced.
Animation is somewhat a weird creature. It’s fun, it’s very rewarding, but also incredibly time consuming, especially when you need to do some pointless work. As a fully digital artist, i know ways to make my work shorter. And in most times, the shorter work doesn’t mean worse, at times it could turn better. I have immense appreciation to the people who drew 2d animation traditionally on paper, however with new technology easily available, i do believe traditional animation on paper can be finicky, and a lot less clear. Even if you put everything correctly. Mark your pages, to be in prefect position, things will happen. Papers will slide, lines wont be perfect, and you will be redrawing the unmoving body 20+ times. I believe that is somewhat pointless. It makes you unfocused. If the assignment to animate the tail, while the body is still, you are just copying one image 20 times, when you could spend that time and energy on maybe animation another tail, or a hand. Anything. 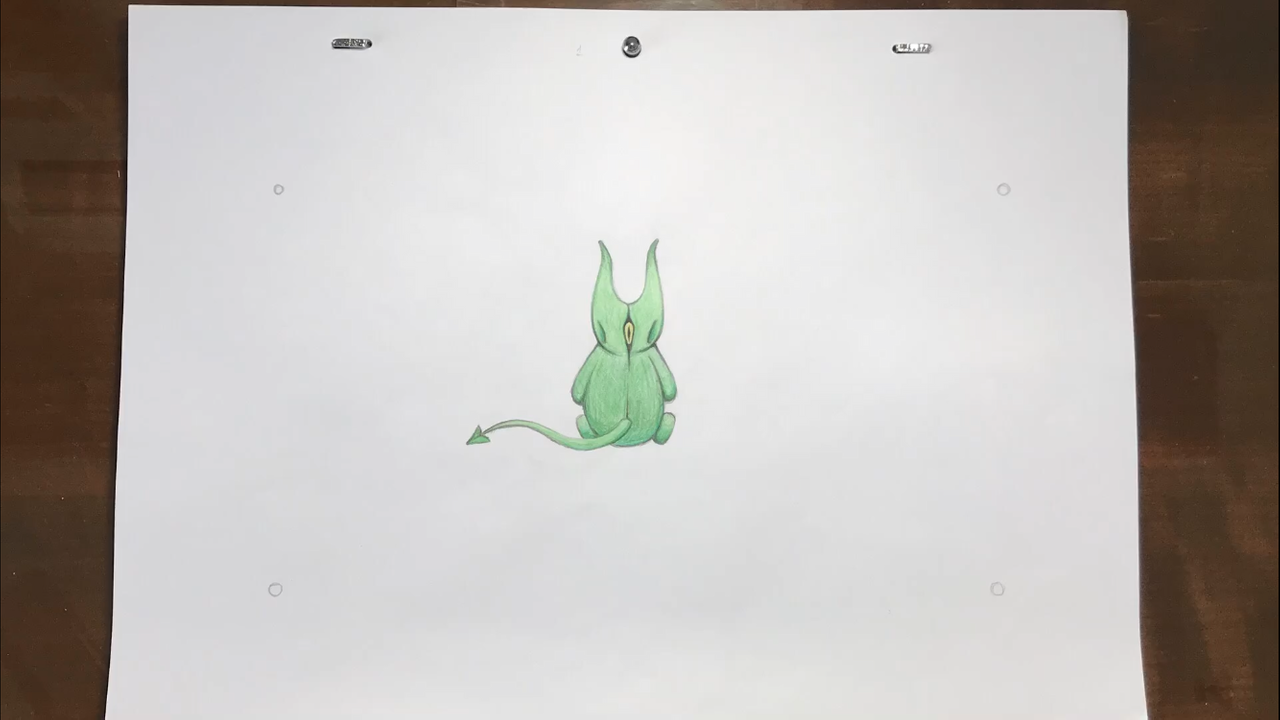 Actually, that wasn’t the worst part of animating. Redrawing the still body 20 times, after the third, becomes really fast and easy, and you stop trying to match it perfectly. As that imperfection is what gives the animation charm. The worst part was when our teacher told us that for people who colour the animation, their marks will be higher than people who don't. Which to me and to everyone else meant, if we don’t colour, our marks will be much lower.
So that’s how a 1 hour animation assignment turned into 7. Six of which involved me and a friend sitting at night at the campus colouring green monster with coloured pencils. The only thing that warmed my heart, was that i was staring at a green monster’s butt, rather than some orange fox’s or grey cat’s.

So how did the animation assignment bring me to another Green Monster piece? It appeared that spending seven hours colouring green monster’s body, didn't just push me away, but in-turn brought us closer. My hands, didn’t have enough, and i wanted more. On one of the classes, while procrastinating, i absentmindedly started drawing him again. This time he had stature. He wasn’t covered in blood, he looked content. His eye and mouth were still closed, while the eye on the belly was wide open. He still had a lot of hair in his ears, but he definitely went through some changes. 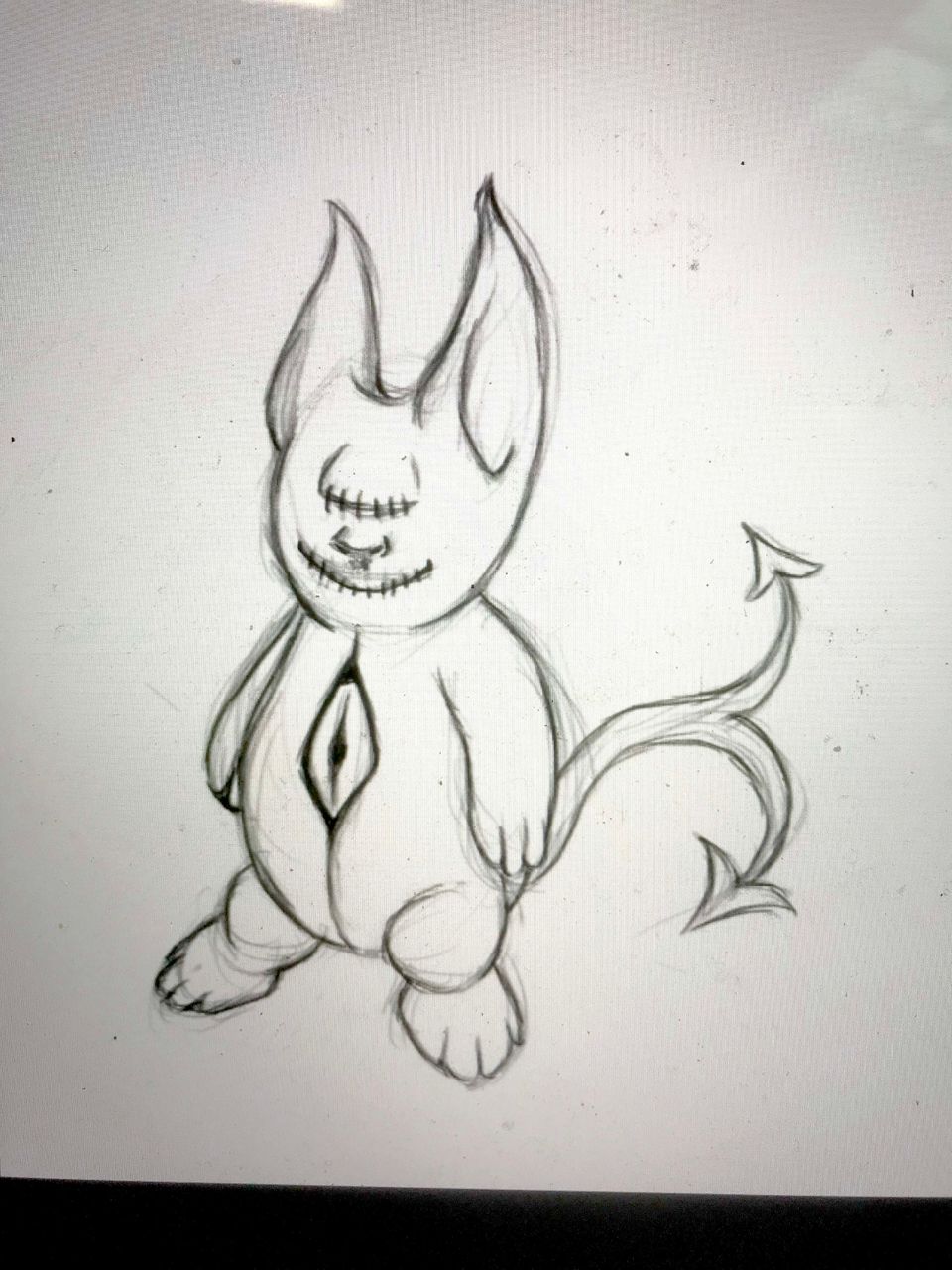 For some reason my subconscious thought he needed someone next to him, so i drew a girl. From that point on he became a monster-plushie.
A lot of people who know me, ask me who is the girl?
I always said i don’t know. But her story came to me, while drawing, which i never shared before. I will do now.
The girl in the picture, I presume, is both me being soothed by green Monster, when she has no one to turn to. And the girl is most likely my long distance boyfriend, who I as a green Monster was soothing and caring for emotionally. 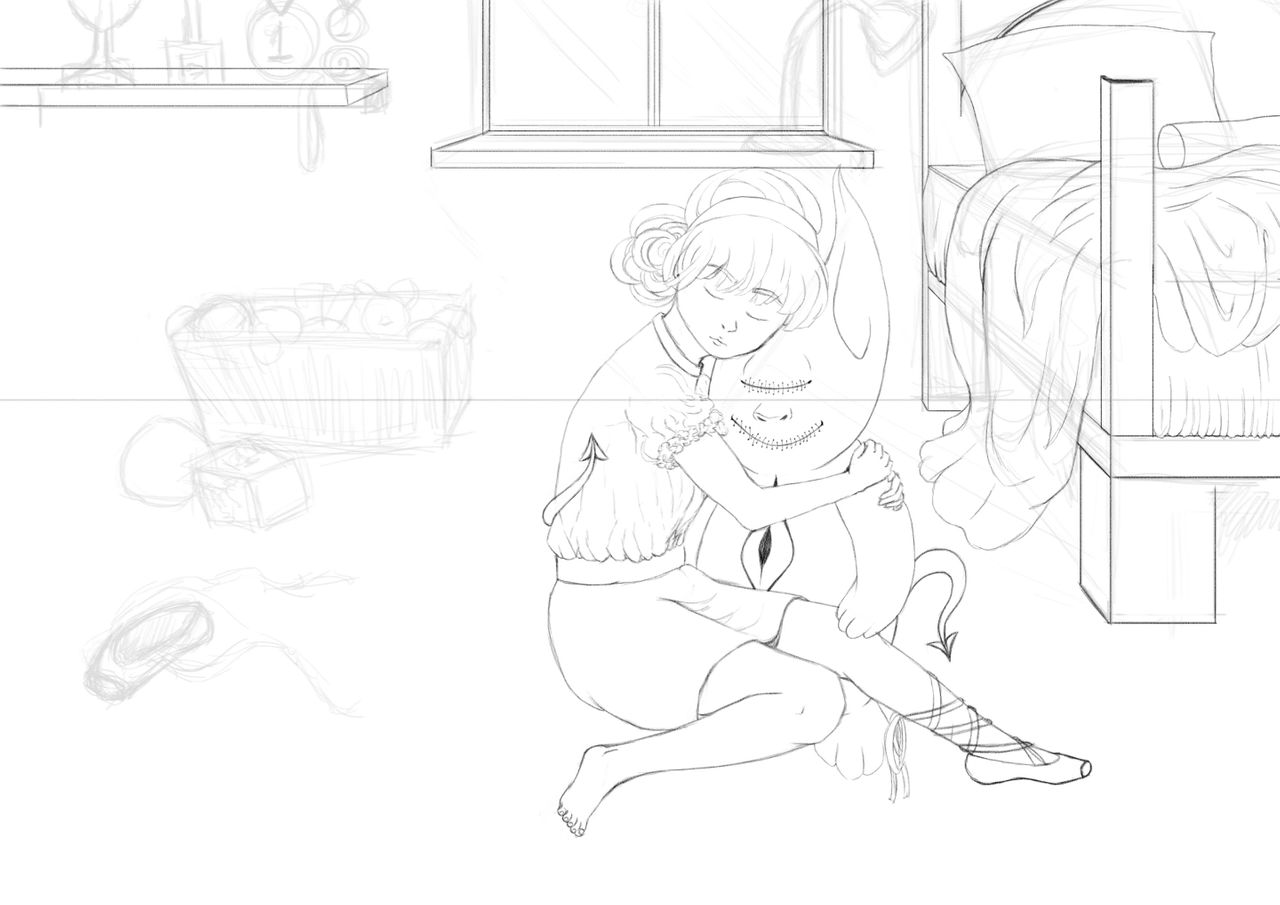 But here’s the girl story, how it came to me, while i was drawing.

She is a girl, growing up in a a good home. She does really well in school and other activities. She owns medals for 1st and 2nd places. She also has a lot of plushies that are all stashed in the box except for green monster. She does ballet.
She is pressured to be good at everything, she is tasked to work hard, and she wants to please her family that puts high goals for her. But she isn’t happy. She has no one to turn to except for the green monster - plushie. She ran from the other room (the light is coming from there) to just drop on the floor and hug the monster for the comfort. She didn’t bother to take the ballet shoes off, one just fell, or she threw it. She has no strength left. She wants comfort and safety. She wants to hide from responsibilities and just be free. 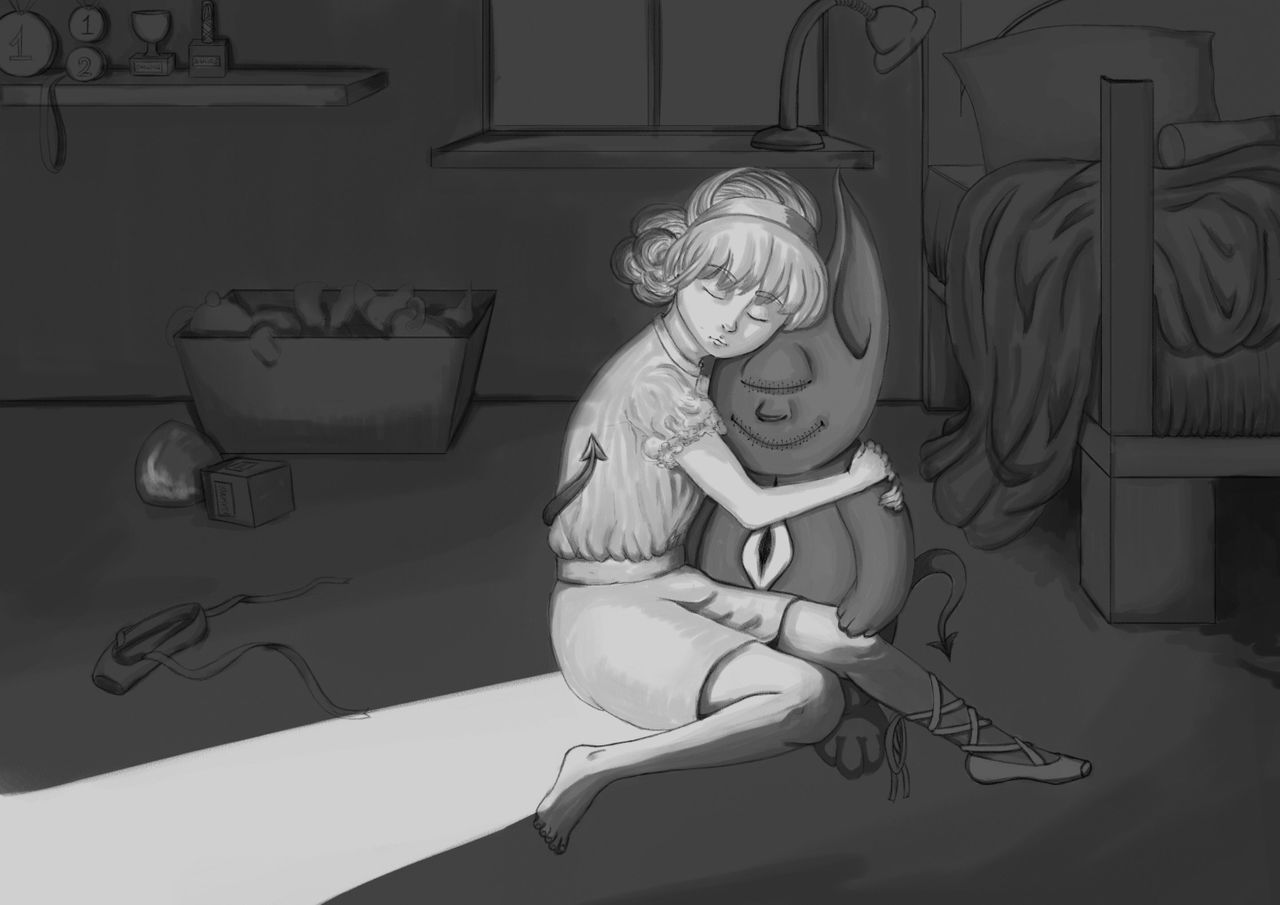 And the green Monsters feelings are much more concise. He finally had a home where he was needed.

With this drawing, I realised something weird was happening. I, the person who struggles drawing humans or complex scenes, did so with ease. And what i didn’t realise then, is that this drawing gave me energy, gave me strength to finish the piece I was working for for 2,5 years. It wasn’t just the ease I was feeling with every green monster artwork, it was also the energy it was giving me back.

But it will be sometime until I fully realise what green monster brings me.