A message from John Huckel @matrix-8

This is Original Content, first posted here by @atma.love at the request of and written by @matrix-8 John Huckel, as John is currently having difficutly accessing Hive

I admire Atma for his balance of Love and Reality. He demonstrates an extreme level of human caring in his actions, and has at the same time been uncompromising in his assessment of the world around him. He says kindly—but frankly—that if you lend any support to the power structures that shouldn't be – you are in that instance supporting Murder! And he judges himself harshly when he admits that he is forced to play their game in order to survive. He sees that the world is now presenting itself starkly as Black and White. All shades of gray have disappeared.

His adopted name, Atma is not just a username, it is the embodiment of the difficult balancing act he has chosen for himself. In the Hindu religion, the word, Atma, basically means Self. But that concept is not in the Western flavor of the one unnuanced person: “Hi, I'm Billy Bob!” No... hewing to the Vedantic Triad of Be/Do/Have the Upanishad describes the Atman as three types of Self:

Now, a word from your sponsor, the creator of the Matrix-8 Solution...
And not to reduce this homage to Atma to the level of one of my normal philosophical screeds – I must still point out that the Hindus (as do most religions – East and West), overly concentrate on the ideals of God and the Devil. They tend to minimize the moment-to-moment messy, visceral fact of the Real World.

I call that Self that we generally identify with as we struggle to play the Game of Life, the Player. It is the vital spark of You, constantly spinning like an armature hung between the opposing poles of the Real World (your Body predominantly), and your Spiritual Essence (your Inner Self, or Individual Soul).

The Player is you, constantly manipulating the Real World to make Things better. It is like the Ego – but stripped of all the negative psycho-babble connotations. And I will leave speculations about Brahman or God for another day.

Atma tends more towards the ethereal, while I am more mechanically oriented. We both want Mom's Apple Pie and Fish & Chips; we just go about it differently. Atma comes at it from more of a vague humanitarian, self-imposed Universal Income utopian tangent. We compliment each other. I say, If they can't take a joke – F--- 'em! Atma is more apt to say, Brother, I know your heart is in the right place – and we can work this out.

What's this got to do with Matrix-8?

The purpose of this lengthy introduction is to point out that however you slice and dice it, the logistically practical answer to the anguished cry, “We've got to get together, and just say, No!” – has yet to be found. But coming at the same problem from different angles, both Atma and I are confident that the Matrix-8 Solution is a real solution, and that it will work once tried.

It's just a matter of getting enough of you folks behind it as a very real and practicable means to solve many of Man's current problems. If you are at all captivated about this as a novel way to use the Internet to subsume Governments, stick around and lend a hand.

It is often exclaimed that, There are more of us than there are of them. But in today's Cancel-Culture Police State, it is the very few Powers that Shouldn't Be who control the Police. And they are quite content to continue to play Whack-A-Mole whenever any of the purposefully atomized citizenry raise their heads above a certain level and push back (e.g., water cannons turned on European protesters, and the FBI set loose on concerned parents at school-board meetings).

Let me rephrase the hackneyed rallying cry of, Power to the People, and turn it into, We the People have the Power!

We all know that none of the Power that any society exerts comes from anywhere but from the People themselves. So, obviously, we have to construct a new system of association in which we don't send our Power (money) to centralized offices, where corrupt politicians line their own pockets and then turn our Power back against us. In other words – we just have to stop sticking it to ourselves.

My favorite analogy to the Matrix-8 Solution in its simplicity is to imagine yourself and 7 other refugees from the sinking Ships of State sitting in a lifeboat, wondering what to do next. The boat will hold just you and 7 others – no more, or the little boat will founder in the chaos of Chatroom Syndrome.

You and your mates all have the same basic purpose – to improve your dire situation. Do you think you and your desperate comrades will be able to come to some agreement about what you as a Group should do next? (I think so!)

Or, do you agree with Thomas Hobbes (that most pessimistic of philosophers), and figure that your soggy group would immediately fall on each other – raping and pillaging until your little boat sank?

I'm optimistic. I figure that rational, Sovereign Individuals focused on, and united by the same Cause would seek to agree on as much as possible. Once you turn off the TV, it just makes so much sense.... It is your Human Nature to cooperate. And since each Individual would obviously benefit from the best they could do as a Group – each Individual has a vested interest in working to create the best operating Group possible.

Ever since Homo sapiens emerged from the forests to settle in cities, figuring out how to secure their Lives, Liberties, and Property in large groups of Strangers has been high on their list of priorities. And, the best civilization has come up with so far is Representative Democracy. It worked really great against the corrupt Kingdoms, but it is now succumbing to the globalists' Sustainable Tyranny.

Keep the pot boiling, they say – but never so hot that too many frogs jump at any one time. Bill Gates wants to reduce your family by only 62.5%. You never liked your aunt Rose, or cousin Leroy anyway. Of course you might miss some of the rest of them. But when you realize that it's all for the Common Good – it becomes quite reasonable. Own nothing and be happy! What could be better?

The Matrix-8 Solution would be better!

It's basically an Agreement Factory to align the Mob – no politicians need apply. And both Atma and I know that it is certainly worth a shot. And I guarantee that once a fully programmed platform is in place, the Matrix-8 Solution will work mechanically just fine. We can even pull it off right now without any programming necessary. There are enough utilities currently available for free on the Internet. It would be clunky – but it would work! What else have we got? Raucous chatrooms? Organizing protests? Voting the old bums out? I don't think so.

Get back in your lifeboat for a moment. Now that you 8 Strangers have come up with the best feasible plan given the circumstances – you elect a Delegate to speak for you. (There's only 1 phone in the boat.) The Delegate makes a Zoom call to talk to the 7 other delegates from similar lifeboats that the Matrix-8 Platform has determined are closest to your little boat.

What we're doing is building a matrix here. (Graphically it can be visualized as a Cube Fractal. A cube has 8 corners – one for each of our 8 strangers.) Each lifeboat is a 1st Level 8-PAC [8 People in Active Communication]; that Zoom call creates a 2nd Level 8-PAC. Each Delegate on that Zoom call is talking for 8 people (including themselves). The Zoom call creating the 2nd Level 8-PAC represents 64 people. (No matter what level is reached in the matrix, there are never more than 8 members to any 8-PAC. 8 folks with the same agenda should be able to hash out what's next and which among them they will elect to tell others about it.)

The 2nd Level 8-PAC in turn comes to an agreement about what to do next and they elect a Delegate to carry the message to the next Zoom call at the 3rd Level – which represents 512 people. On it goes higher and higher until the Cube Fractal accommodates all the folks in the lifeboats – now sitting in their corner seats. The whole world would fit within an incomplete 11th Level fractal. And as the matrix grows, the Zoom meetings are open for anyone in a lower level to monitor. There will be no smoked-filled rooms behind closed doors. Information flows up and down the levels until a Business Plan is agreed to, that a sufficient number of participants in the matrix agree to fund. Then discussions end and the rubber of the Internet structure meets the road of the Real World.

Let's all thank Atma for his work to make this information available to you. And let's all push this possible solution forward. We might not have much time – but together we can do it!

Thank you John for your kind words.

Please also Join the New Age DApps community to learn more and to be notified of any important news.

Note: Participants in The Matrix-8 Solution Concentrated Consensus Mechanism will be anonymous, yet will have a Trusted Reputation score based on interactions in the network. 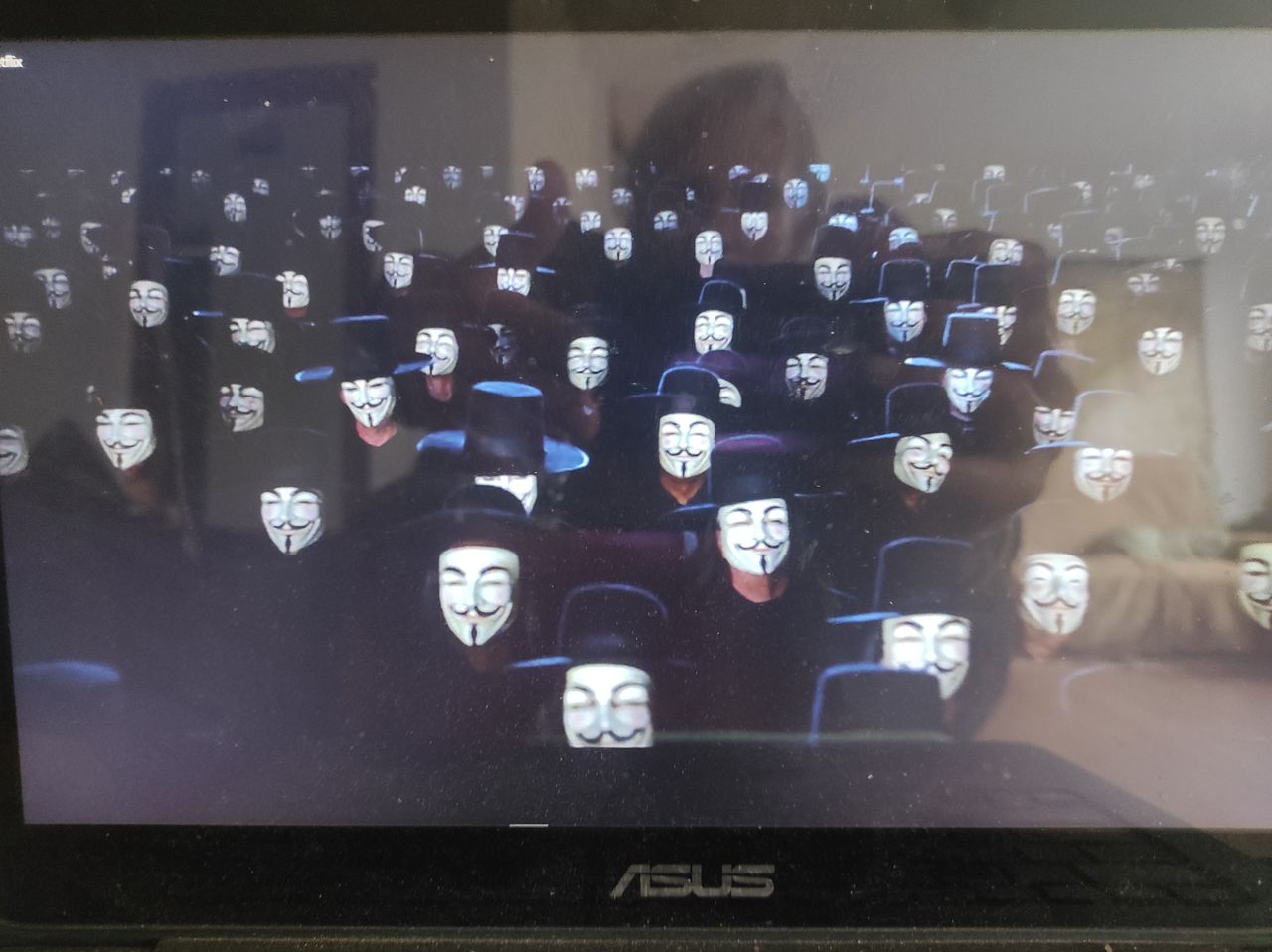 Image Source - screenshot from V is for Vendetta movie