Piecemeal descent / A lost invention / Where no ivy may creep

Piecemeal descent,
A lost invention &
Where no ivy may creep
___
. I am drawn into the pulsing circuits of the past —
geometries of crumbling memory-bricks in tattered walls
insinuating self-imposed restrictions on the one
who sees as real the phantasm-patterns as they run.

My melted vision — and degraded category-grid
start making fantasies of all the things I think I did,
until the pace of thought accelerates beyond all bounds
and my strung, shattered nerves are shaken by each simple sound
not even heard.

My ultra-circuit-self is born in moments when the field
collapses to impose a singularity of yield
of energy — aetheric spiral surge beyond control
resulting in the piecemeal radiation of the soul.

Had the world always been this way? Livid with raging overlays surging over all the surfaces? I scratched my hair, making an itch where there wasn't one. I didn't know. The past seemed such an unreal thing, so abstract as to be only a concept. My name, my name, it was... names were absurd. They were presumptious. There was not a way to encapsulate even a single one of these sensations in syllables.

I was about to rise from the couch I was sprawled upon when something caused me to freeze. I had had it all wrong. It wasn't rest, miniature death, lethargic slumber that was imprisonment but frenetic motion. Moments before when my eyes had been closed (Had they been closed? What a stupid thought. What an idiot thought.) I had not been shackled by the relative lack of motion and vision, but freed by it. I frowned, or would have had my face not been paralyzed.

Let me go back to freedom; I could achieve that by letting the swimming hybercubism of the world hypnotize me into a stupor, probably. A chill and flush of perspiration broke over me suddenly. I knew then my eyes had never been closed. I had been laying like this, here, forever, thinking these same thoughts in circles, cursed to believe they were novel.

III — Where no ivy may creep

I am lone ivy,
voice of the twining:
selfless expression
of all the green vining
of nature — her finger,
her endless unwinding
exploring the changes
made by those dividing,
sad, cold conquerors.

And I am still hers
when the sun singes down;
when drought plunges daggers
of heat to make brown
all my undying stem.

And I ne'er speak of him!
That cruel, twisted fallacy,
mind of the torturer —
thought, unreality
follows our brilliance,
— my mother's and mine
to make hate out of love;
to make haste as I twine
to steal life from above
and to take it down deep
where no ivy may creep. Writing and images synthesized and compiled
by Daniel Pendergraft for Proof-of-Brain
Community on the HIVE Blockchain
published on September 1, 2021.
.
Writing is fully original
and can be considered a free-written
blueprint towards eventual completion of a piece
shared and preserved immutably on blockchain.
.
Images were created by processing
original smartphone photos
and public domain images using
Deep Dream Generator.
.
Images 1 through 7 — original photography with iPhone 8+
Image 8 — public domain photo from pixabay. 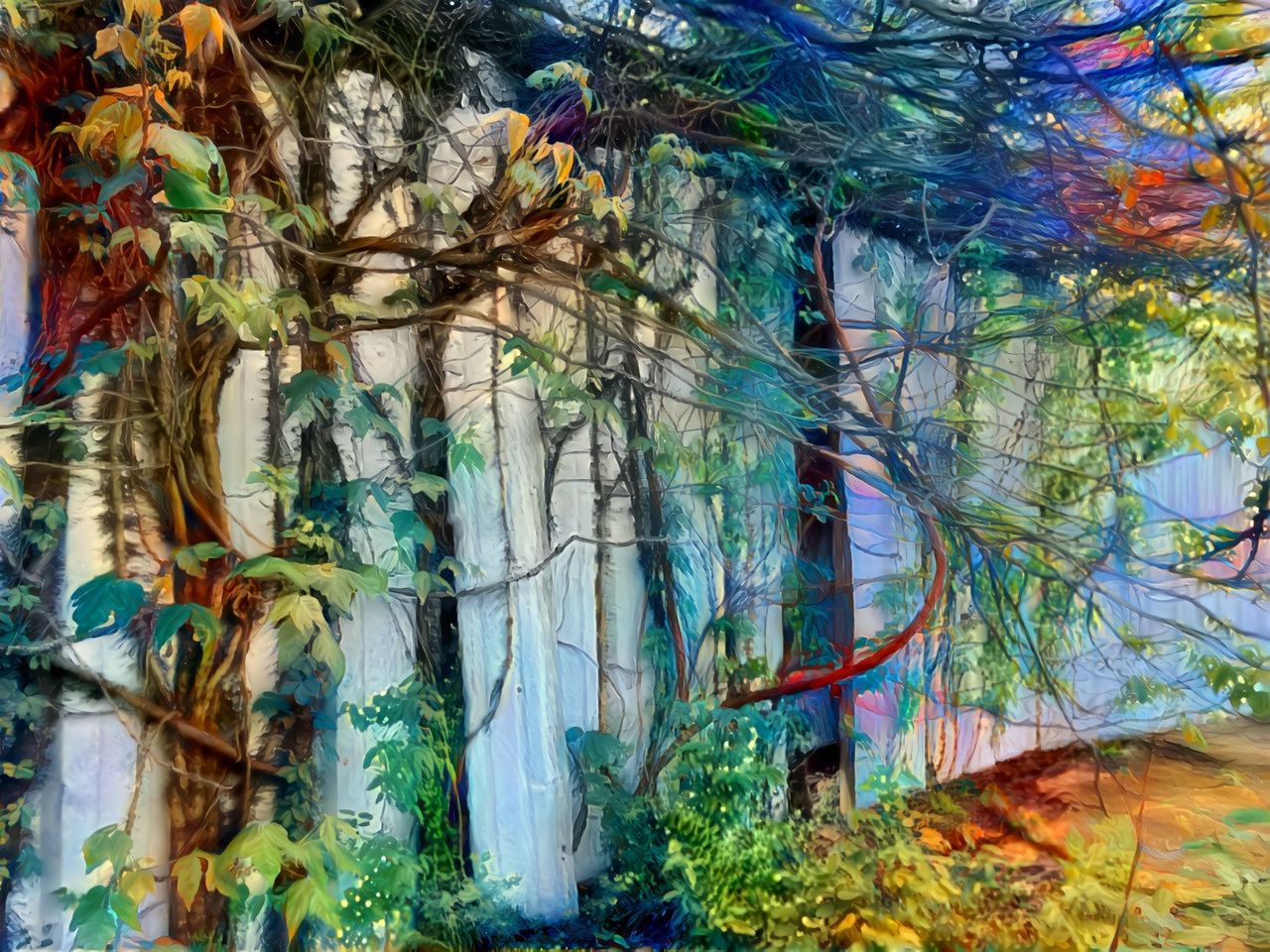