As some of you are aware, I had to go find more chicken after last week's incident, and decided to go with organic gingers. I love ginger chicken, they are very smart, and these ones are supposed to make 68g eggs, and that's exactly what I am looking for.

After chatting with the owner of the farm, I ask her if I should be aware of anything, she answer that they might fly away on the first few days, as they are very sad to leave the farm.
I can see that the woman is very disappointed and sad to leave her chicks, I know that they are the perfect fit for us, it's also a sign that she loves her chickens. 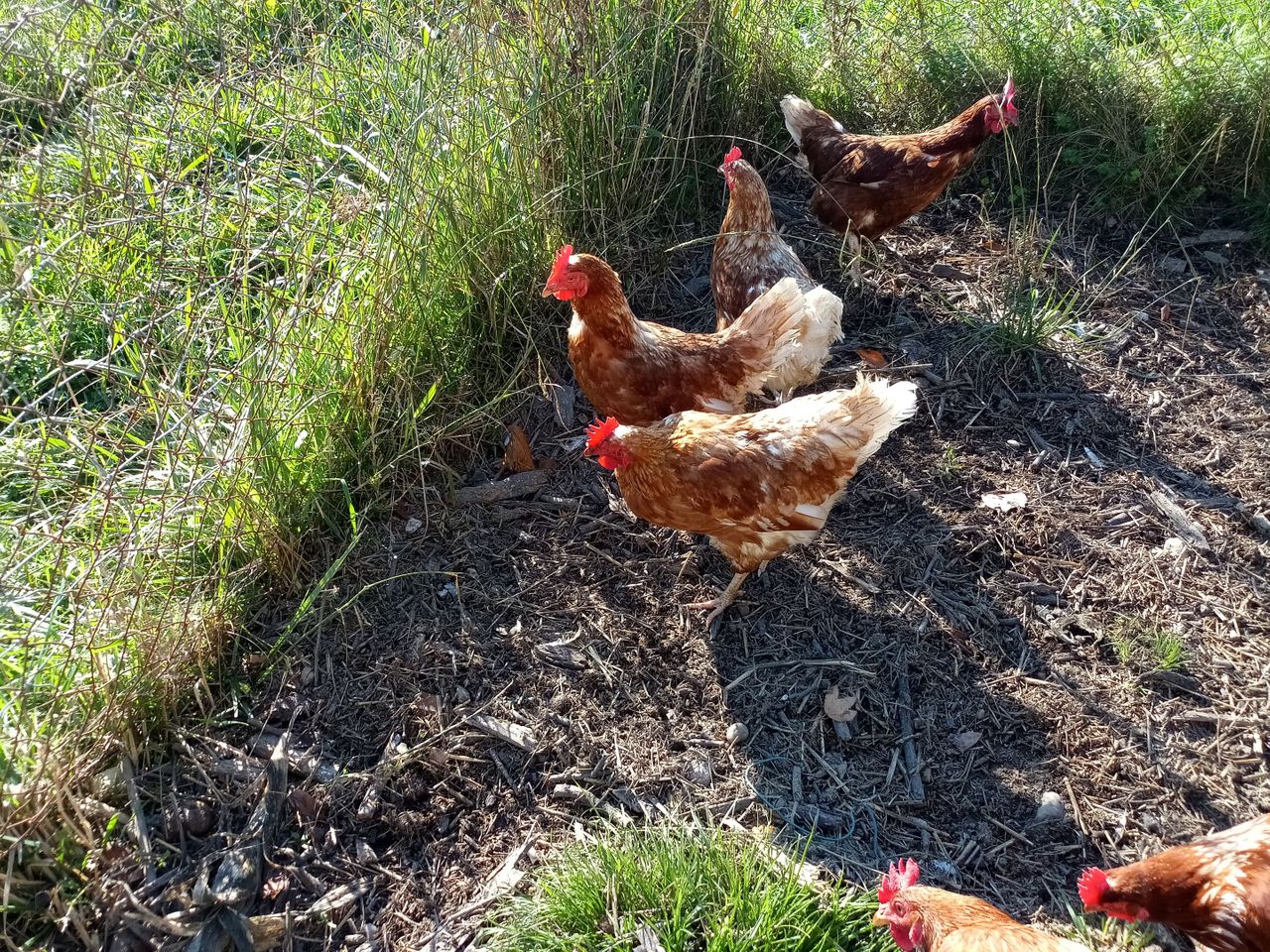 We are bringing them home, they are very calm on the way, and still behaving very well when being released, I've put some radio on in the car.
I took 5 of them, it's now time to introduce them to our survivor Mozza, let's see how it goes:

In case you aren't too sure what's going on, Mozza is attacking the newcomers.
Yep, Mozza is a gangster, and survived a fox onslaught, so she will probably warm up later on. You would think she would be happy to see some of her own kind, but she spent the last few days with me, I was expecting that seeing familiar faces could be good for her.

She did it one more time, and then she moaned the whole day, doing "EEeeeeeeeeeeeeeee" for hours and hours 😆, but stop pecking them, that's an improvement. My wife asked me how we are going to differentiate them, they look so similar (such a beautiful ginger), she suggested to spray paint them 🙃, it's a joke, chill out PETA. I really hate trimming bushes, what a fucking waste of my time. There are thorns that have grown inside the bush, so here it's me getting with both of my hands on that messy bush. If you want to see the action from a different angle...Man, this post starts looking like a shitpost, I have to improvise something on the spot, because I feel like I am losing my audience.
Hold on, let me grab my car keys. Fancy that! Some berries! I was thinking, that I could keep them in the greenhouse during winter, and get a head start for spring?
Actually, what exactly could I make survive in my greenhouse this winter? Challenge accepted, let's grow all sorta shit! What do you think plant? Oh I didn't see you there son? Happy? Back at the greenhouse, I am just going to drop them here for today, and repot them in the next few days.
3 types of berries, currant, raspberry, and blueberry. We already have blueberry bushes, but I want to try to grow them in a control environment,

I also have to be careful with the red currant because, check that out: This is black bryony, I mentioned it before in a post, highly poisonous, and growing all around the property. We of course warned the kids, not to eat any berries, at ANY COST, without showing us first.
I learnt online, that you can actually make a herbal medicine with these berries, supposedly helping with healing hematomas, but you really have to know what you are doing, I will not risk it myself. There were still some tomato plants inside the greenhouse, that got a little bit discarded, also few eggplants that just did not grow, I might keep few plants inside there, they aren't taking too much space.

What was too dead, was thrown to the compost. Mozza came to help, she is weirdly curious and stick around me constantly since the fox attack.
You can also see that Charlie the sheep dog is never too far hahaha. I am still trying to figure out why she doesn't like spending time with her own kind. That's what kept her alive when the fox attacked the first time around, but I wonder really if she tried to warn all the other hens before the attack, and they called her a "conspiracy nut" 😌.
Once again, she doesn't like to spend too much time with other the newcomers, instead she stayed with me near the greenhouse, checking what I was stacking in the wheelbarrow (mainly soil and worms). I left the strawberries die and dry up in the greenhouse, I kind of forgotten about them, so I repotted them, hopefully they will survive. I also have strawberries outside planted in the ground, that I might have to cover up soon with the incoming frost. the temperature has been dropping so quick, we already have some cold nights, I don't mind lighting up a fire 😁 at night.
Anyway, no excuse, I should have done better! I got a little bit sidetracked with everything else this month, so I spent very little amount of time either in the greenhouse, or on the fields. I've spotted apples that will be ripe soon, I might post about it soon. I got some back ups that came to help me and finish the job, got that grass piled up to make some brand new compost, the chickens loved it! There is always something to do on the farm, today was another busy day, not the most entertaining, but still, it's nice to enjoy the last sunrays, before it gets too cold. We promised ourselves that we will spend more time outside this winter, so we are going to equip ourselves. At the end of the second day together, the chicks were just ash bathing, having a chat, I think they're getting along just fine.
When it was time to sleep, they all followed Mozza in the small cage instead of the coop, I am going to add straws, as the nights are getting cold. I am still looking for some more stuffs to grow in the greenhouse, if anyone has an idea, just share it in the comments!

Thanks everyone, have a great week!