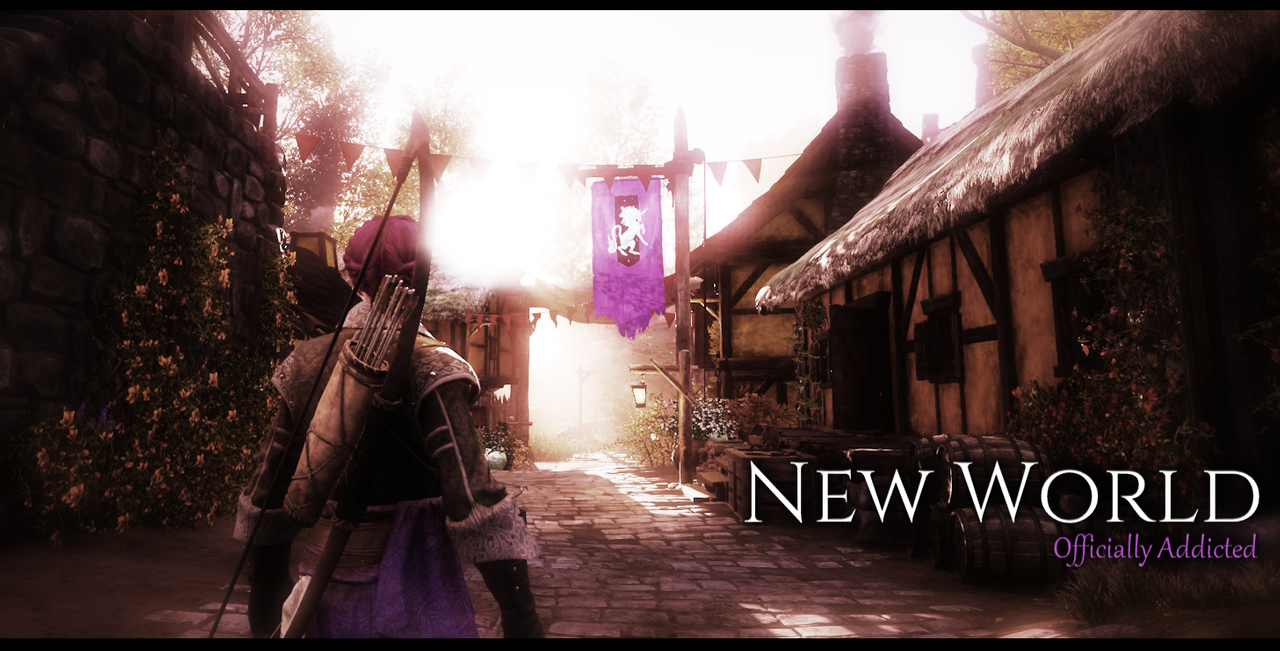 I've been waiting and waiting for a new game to actually pull me into its grasp and refuse to let me go. A multiplayer game that I can play with my partner and friends. A game where I can gather and grind and craft and create to my heart's content, but also strive to complete other content.

In World of Warcraft and other such games, I have absolutely no interest in doing end-game dungeons and Mythic Plusses and Raids, over and over and over.

Raids are filled with irate people whom I want nothing to do with. The Mythics I only do because it's group content with my little select group of people, but I don't really want to do it. Let's do the same five dungeons over and over and not get gear, then do it over and over again for one piece of gear to drop that is only good for one of us and we've already got it.

I much prefer this. Creating my own gear, faction-rep-grinding to buy my own gear, and perhaps finding something suitable whilst out and about. Gearing up is not The Be All End All End-Game in this! And I love that. 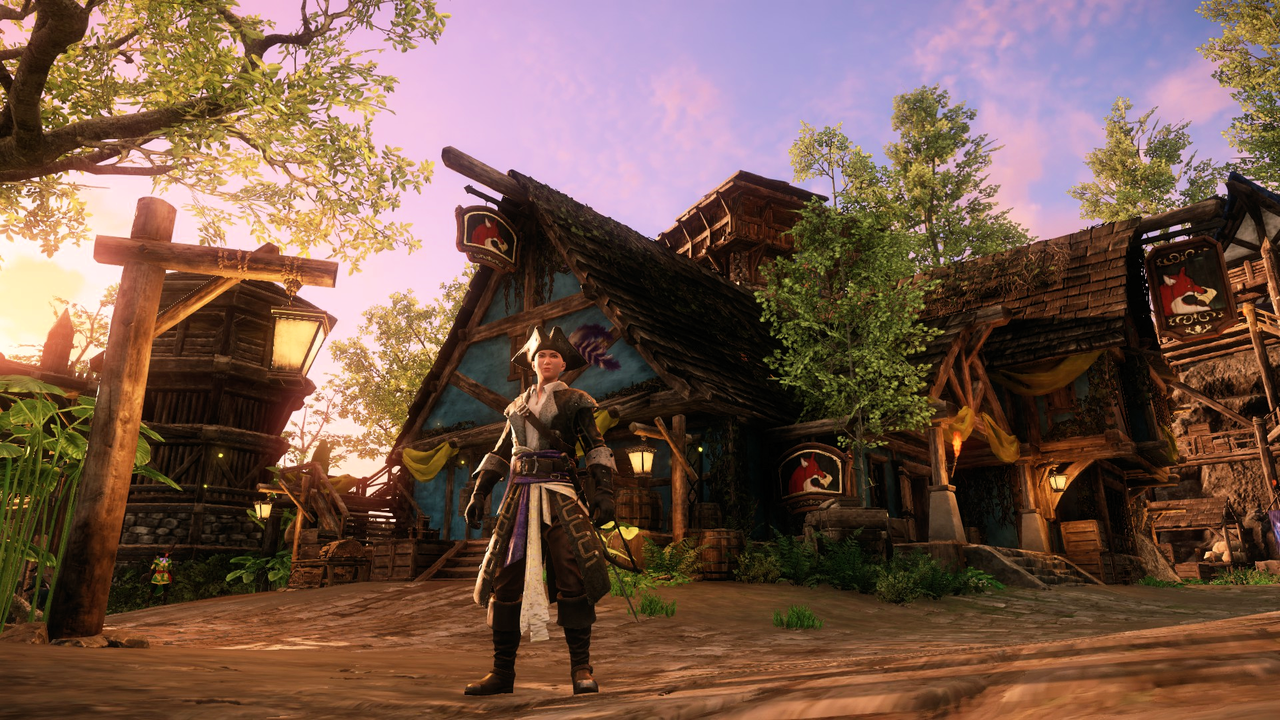 I'm maining a Dexterity build character at the moment -- Bow and Rapier! But I'm also speccing into Focus, because when I do PvP I want to be Supreme Healer. Furthermore, I don't normally have the urge to actually PvP in games. It's just something that goes ignored unless it's different from your average battleground.

In this, I actually want to. 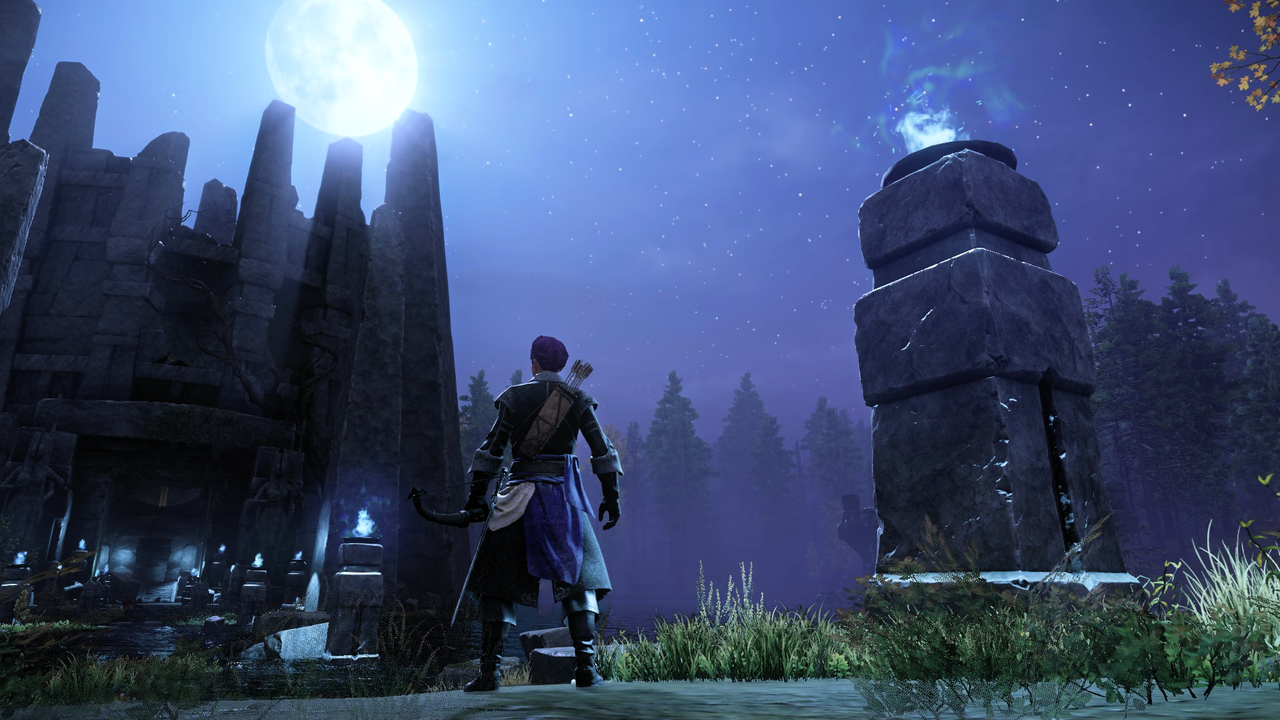 So, at the moment, I plan to roam around and gather every Hemp plant I see (which is not many; everyone is after it!) and I shall craft myself some Focus specific armour, ready to throw myself into healing.

Whilst out and about, my partner found me a very nice Life Staff that has Focus and Constitution on it, and I'm going to set about levelling that up when I get back in game. 😊 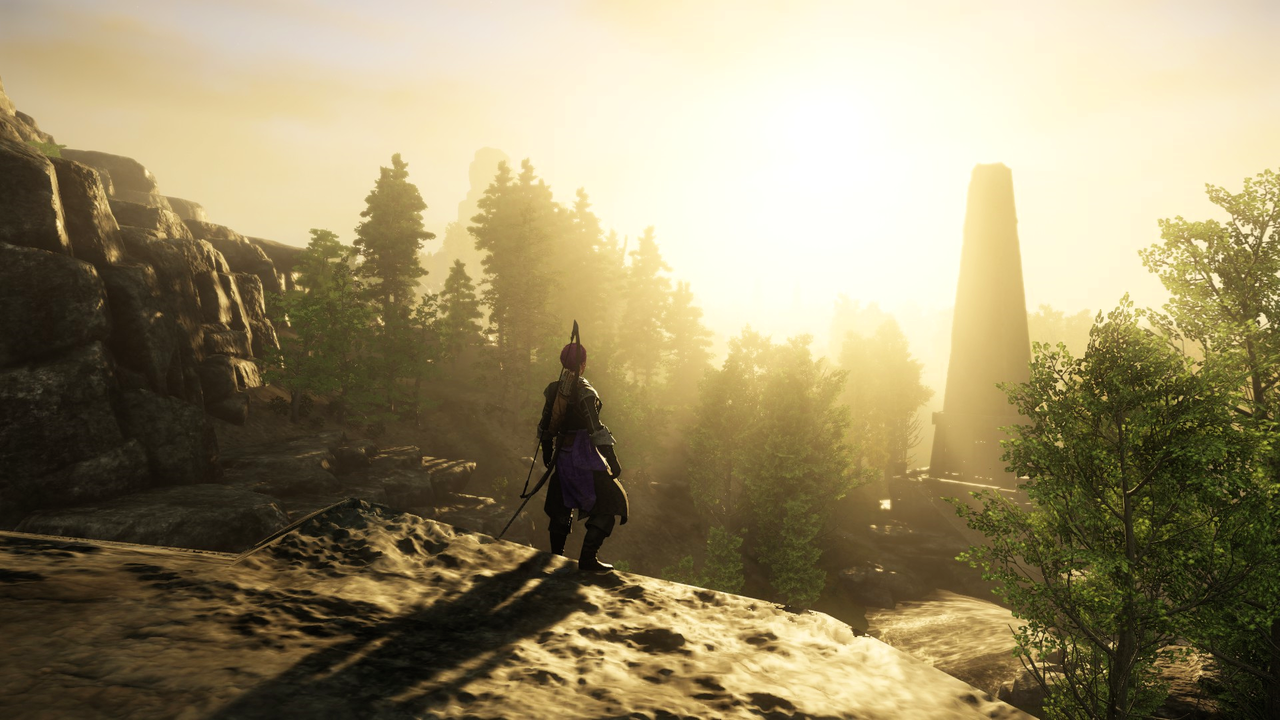 Because I'm a no-lifer who ploughed ahead of everyone 😂 I've gotten up to the bit in the main quest where you make your Azoth Staff. I'm going to do that, then stop doing the main story whilst my partner and friends catch up.

Which gives me plenty of time to gather and craft and test out some PvP! I'm looking forward to it. The last time I really enjoyed PvP was in Cyrodiil in Elder Scrolls Online. I loved the big massive group battles when taking over forts and things. Healing all the people with my aoe heals. It was great.

I'm hoping the 50vs50 battles in this that I've heard so much about live up to my ESO experience. 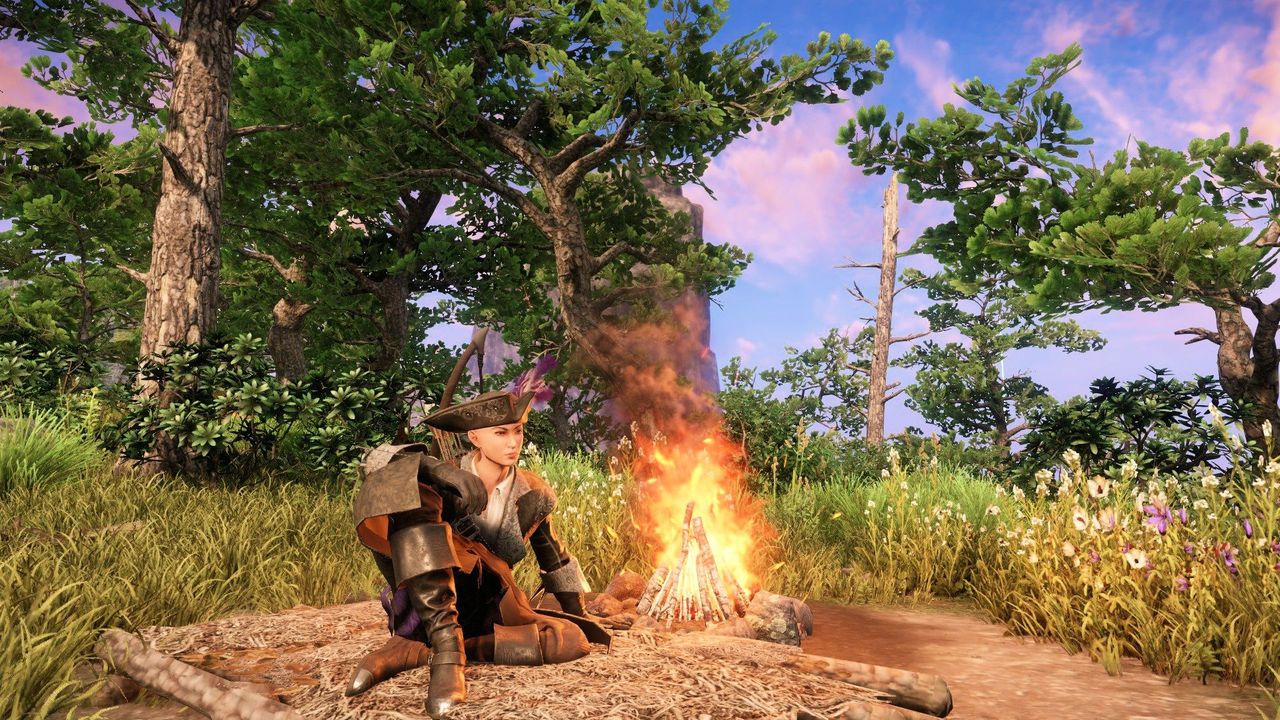 I'm still saddened by the lack of first person view in this though. I really love taking scenic screenshots and this game is very pretty to look at!

The best I can do is lie prone and hide in a bush so that my character can't be seen, but unfortunately it moves the camera when you do that. 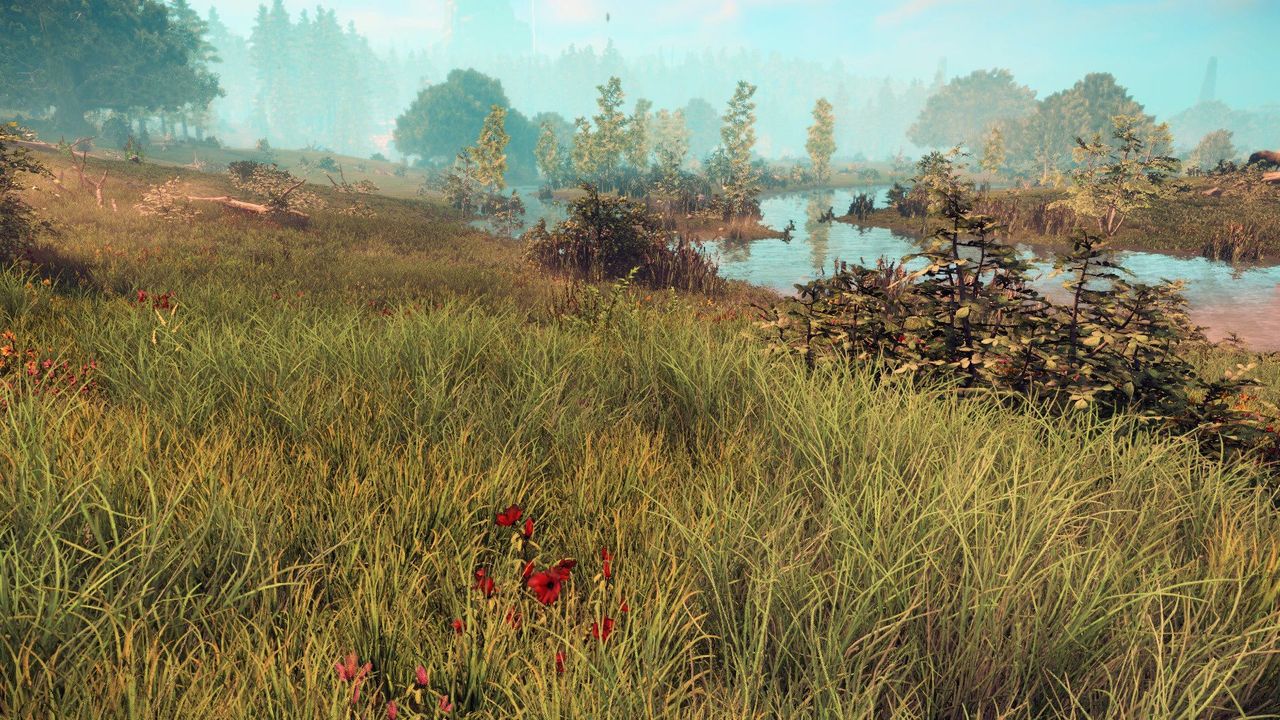 You can't see meeeeeee! 😁 Perfect for an ambush. Lying prone amongst the lush grass, waiting for an unsuspecting green or yellow to wander by... muahaha.

Ah well. I'm really enjoying myself. 🙂 I really recommend this game. The queues suck if you want to hop onto one of the big servers, but the one I've chosen seems pretty good. Amazon have upped the server limit to 2500 by the looks of things, and last night my server was full with only a 30 person queue.

Really glad we didn't decide to go with the Utopia server like we originally wanted. 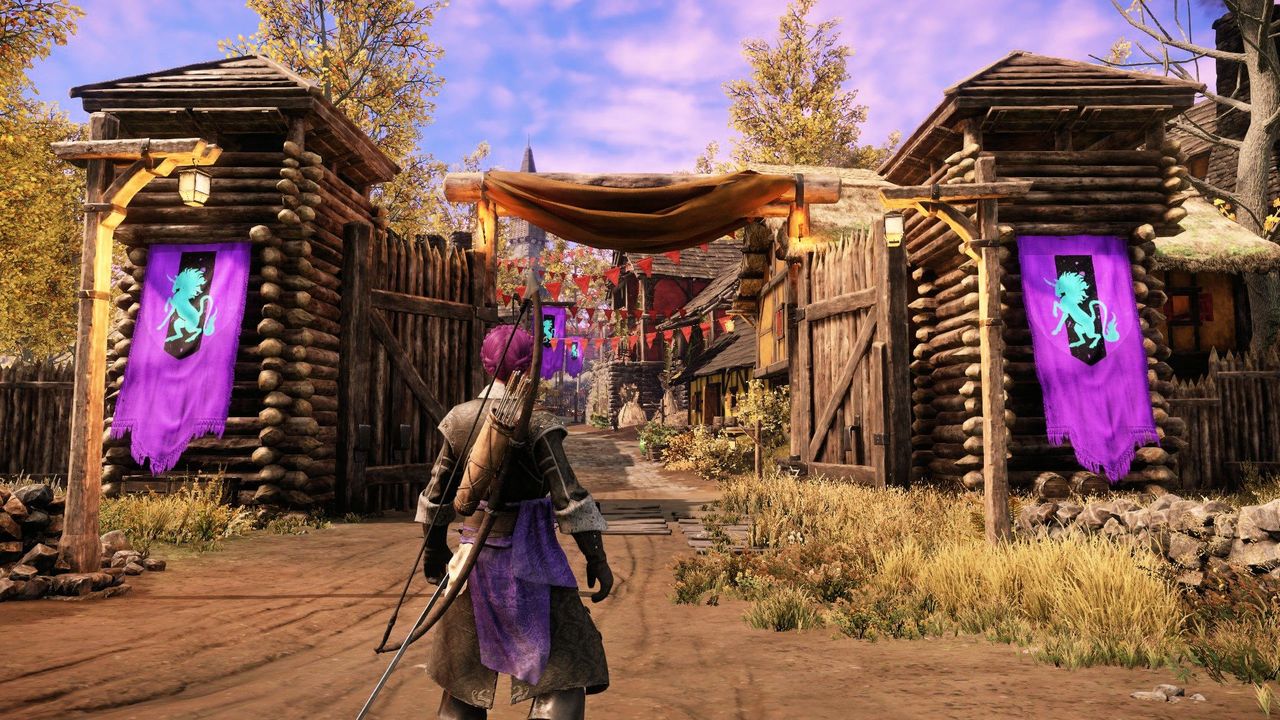 I'm currently level 20 and have decided to make Everfall my first base of operations. I started out in Monarch's Bluff, but slowly carted my bank-full of goods to Everfall. It seemed a more central location and there are farms all around the city that I can steal goods from to cook my feasts.

Plus, it helps that it's currently owned by a Syndicate company. Though, obviously that could change very easily. This is a war PvP taking-over-territories game after all. Regardless of who owns it, I'm planning to buy my first house here when I can afford it.

That's my plan at the moment anyway -- we'll see how it goes!

Anyway, I'm babbling on and on!

Time to do responsible adult household things, then get back to Aeternum! 😁 😂

All screenshots in this post are courtesy of me, @kaelci and are from the game: New World.
Hive Gaminggamingnewworldmmorpgamazongamesproofofbrainhiveaustraliabattlepalnetneoxian
kaelci72
via peakd
$ 69.68
360
H2
H3
H4
3 columns
2 columns
1 column
18 Comments