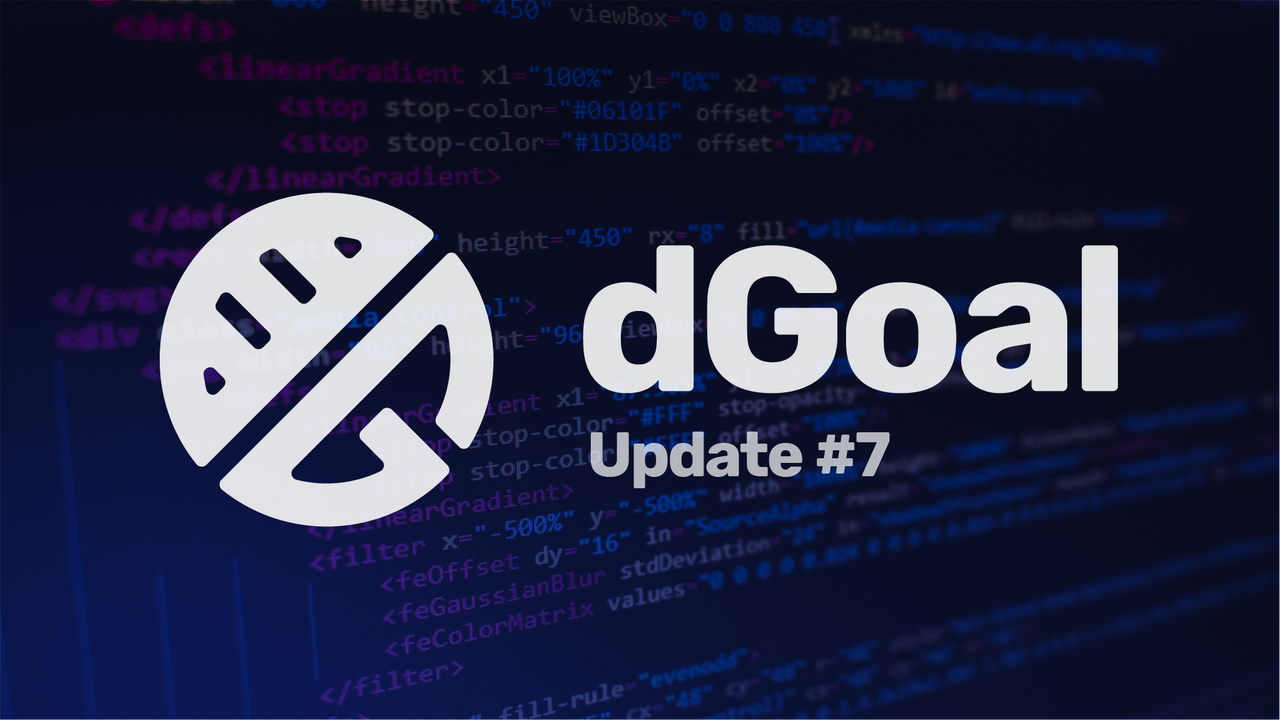 Welcome all to the 7th update to dGoal App development! Hard to believe, but it's been 2 months since the last update was published! A lot of time passed with little from my end, so let me start with some comment on that.

ℹ️ This is a dGoal app work update. Get to know of the latest updates, be the first one to hear about what's coming next.

Last 2 months were really tough for me: I had a lot of headache with leaving the previous job and onboarding to a new one, I also had few other important projects to finish, as well as some personal things going on. This all resulted in dGoal's development being really, really slow. I managed to work on some things, but I could not find the time to finish anything that I could roll out to production.

Moreover, these recent few months were also marked with slowdown of Rabona's development, as its team also had some other things that they had to focus on (other projects and life in general). This all compounded and resulted in many people starting to doubt whether Rabona and dGoal will be developed any further and if it makes sense to keep playing the game.

I wanted to clear out that dGoal is still in active progress and I have no plans of leaving the project. On the contrary, I have a lot of plans for new features and enhancements and already started working on them again, since I finished and resolved a lot of other things that occupied me previously. Let's move things again!

Currently Rabona.io and dGoal.app interfaces will both work independently to let users choose which one they want to use, especially that dGoal is not yet finished. This is not going to change anytime soon, but the future is open.

The effects of dGoal and Rabona joining forces can already be seen. Last week me and @rondras managed to fix two of the most annoying issues that users were facing: one is the Request Header or Cookie Too Large error, and the other is encryption error which happened for some secret keys. These were present since quite some time, but are now fixed for good and we're on to next bug, issues and requests. Two heads are better than one they say :)

June is ending soon and we've entered the second half of the year for good. Because of that I wanted to share with you dGoal's roadmap for the rest of 2021 so you can follow along.

July will be dedicated entirely to implementing My Team page. It will integrate features from Rabona Team, Training and Sign pages. The idea is to create a central place from which you can easily manage your team: heal/unblock players, renew and cancel contracts, train your team, as well as scout players and sign them. From there you'll also be able to change your club's name, and in future manage more settings (like restarting, maybe even setting your own emblem).

It is very optimistic to assume that this work will be done in July. More probably it will also take place in August.

In August finishing the My Team page will still be the main objective. In the meantime, as part of @rabona team I will be working on tournaments feature. More on that in the roadmap published by @rabona.

Once My Team page is done, I will be able to proceed to implementing new features, based on this view:

In the meantime, we will still work as @rabona on implementing Tournaments.

For October the Stadium page is planned to be implemented. It will reflect Rabona's features closely, but will probably also have some unique features, like notifying you that your stadium was occupied fully so you should bump the price up or upgrade it.

For November I plan to implement Rabona's Financials page into the dGoal.

The end of the year will be a time for some rest, with Christmas coming along. Probably some minor features and bugfixes will be done in that time.

This is all for today's update. A lot has happened in the last couple of months that at first slowed things down, but now should open a new road for both dGoal and Rabona. Stay tuned!

If you also have any ideas for new features and enhancements, submit your suggestions to dgoal.nolt.io or vote for others submissions to show that you'd also like to see them implemented.

As always, thanks for your attention and see you next time!

dGoal is an interface for Rabona online football manager,
where you can manage a fictional football club and earn cryptocurrency.
Do you have what it takes to be a top football manager?