Hello Hivers this week we are in the presence of a new challenge, particularly it has been a challenge for me, since the NO ATTACK monsters have to be positioned very well so that they can be useful in our battle strategy. So, this week I was able to learn very well how to use this type of monsters in my favor, some will say that they are not useful in battle, but the reality is that, with just one of them, it can be the difference of winning or losing a fight.

This time it's not a specific skill that has to be shared, it's about the monsters that don't have attack in the game, at least up to a certain level of the card, in that sense, using this kind of cards that don't attack, means that, depending on the battle rules we have we will decide if it's feasible or not to use them, because in my opinion and the way I can use them according to my strategy, they can be very useful as a decoy, while the rest of your team attacks a certain target in order to weaken either its front or back line.

One of my favorite rules without a doubt, because what it does is it gives all monsters the ability of Sneak, which allows the monster that has it to attack the last card of your opponent's formation.

This rule allows all monsters to obtain the "Knock Qut" ability, so if a stunned enemy receives a direct attack from any monster with this ability, they will receive double the damage. Taking advantage of the set of rules, I decided to use my strongest equipment, so my Zintar is the most powerful summoner of my deck, in addition to this, his skill allows me to decrease the attack of all my opponent's monsters that are melee in 1 point. This is a fundamental part of my strategy since it is basically centered on the "Super Sneak" skill. Fundamental part of my strategy was to use my front line as the first monster to my "Furious Chicken". This is because my strategy is based on directing all the attack power of my monsters to my opponent's back line, so placing him in this position would allow me to use him as a decoy to make my opponent waste his front attacks. Another monster with no fundamental attack in my game. I used it in the second position because my strategy or utility that I determine for it are two things; The first one is to serve as a decoy just like my "Furious Chicken" and the second one is that it has a very useful skill, which is to slow down all my opponent's monsters by 1 point, making them slower and allowing the probabilities of attacking first to increase, which would give me advantage in the battle. An incredibly useful monster for this kind of rules like "Super Sneak", I put him in the third position, since he is the second most alive monster in my team having a total of 6, so, if my front line fails he could be an even harder opponent to beat while the rest of my team attacks his back line. The great thing is that his "Doublé Strike" skill allows him to attack twice in one turn and with a 2 point melee attack the damage for the opponent would be double, plus his other "Retaliate" skill in case he is attacked would allow him to hit back, so at this point my strategy is going perfectly. The fourth and penultimate monster of my formation is the Skeleton Assassin, I placed it in this position to protect it from my opponent's attacks in case his strategy would be based on attacking the last cards in my ranks. So his speed and his 3 point melee attack would allow me to do incredibly fast damage to my opponent, plus his second skill "Poison" increases even more my chances of winning because if he places poison on his monster at the beginning of each round it will lose 2 points of life, which would accelerate one more my victory on the battlefield. The last monster in my formation and which would ensure me victory, as it has essential skills and very useful for this set of rules, as its healing ability allows it to recover a portion of his life lost in each turn, which is great making it a hard card to beat, giving more time for the rest of my cards to attack freely, plus by getting the ability "Sneak" by the rule in the battle, I would allow him to attack with 4 points of melee attack, so the damage to the back of my opponent's formation would be increased even more.

Did my strategy work?

In this battle my strategy worked perfectly, since according to the rule all melee attackers would attack the last monster, so I left my 2 front cards without attack as a decoy while the back cards attacked my opponent.

What could I try differently next time?

Every time I fight I am very aware of how far I could go with my current cards, so I always stick to these, for me the most important thing is to know the rules of battle and the skills of my cards this will always allow me to come up with new strategies that fit the set of rules of each battle, this will certainly make it possible in the future to keep improving and one day face the best players in the game.

Don't you use ATTACK monsters often, why or why not?

This kind of monsters are essential for the game, I usually use them often as long as the set of rules favors me, because, if I use them in some rules where I won't be able to strategically take advantage of them to the fullest, I prefer not to use them. So, using them in my strategies is because the rules allow me to be able to place them in a way that can distract my opponent, while the rest of my team attacks. 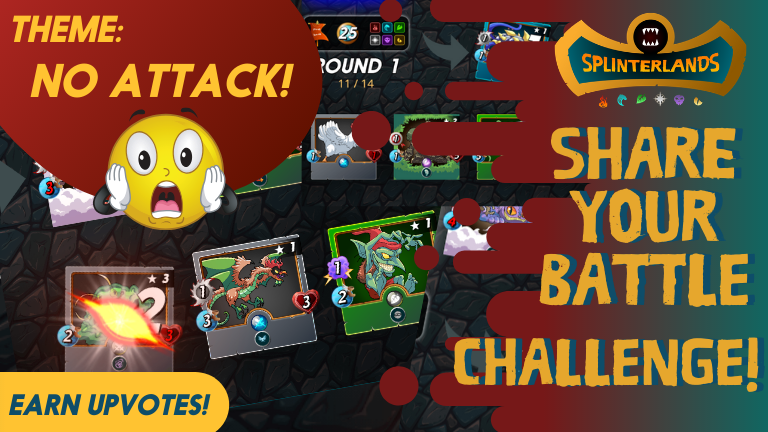 ¡I invite everyone to join Splinterlands the best blockchain based game full of adventures, battles and strategies where you will have fun and get rewards according to your league!
For questions and concerns I leave your community in DISCORD where you are welcome.

Vote @BDCommunity As your Hive Witness :