The Autumn Joy succulent is now budding, it produced hundreds of tiny flowers clustered together making a pillow a buds for insects to visit. They have noticed and day and night nonstop insects have been visiting these opening buds. They have yet to fully flower but that does not stop these insects from getting to some of the nectar inside. With so many different kinds visiting these flowers I wanted to capture some video as it was quite fun just watching them standing by the plant. A large Carpenter Bee can be seen in the cover image, all of these are screenshots from the video link below. I went outside in my garden and got close to the buds with my macro lens and captured alot of different insects visiting this plant. It is an Autumn Joy Sedum, and has been doing great in this climate even though its a succulent. A little further back this bee that looks massive compared to the little Sedum flowers looks a little smaller now. This year there were enough flowers for many insects to visit, the previous year there was only one cluster and the insects from all around had a harder time sharing it between each other. Though as years have gone by this plant has grown quite a bit and so has its flowers. Now its producing many flowers and all of the buds each have their own space to feed on. With these buds just starting to open, soon they will be a much brighter pink as the inside of the petals show through. But for now they are a whiteish pink. We see a larger female Carpenter Bee and a smaller male. A Fiery skipper Butterfly can be seen feeding on the flowers, its mouth parts probing each flower. With hundreds of it may take it all day. It moves around the flowers every few seconds, as it finds more untapped flowers. A Red Paper Wasp is also feeding on these buds, I was surprised to see so many predator insects feeding on flowers as well. These insects would mostly get along, just only on occasions they would chase away others from the same cluster of flowers. An interesting sight, two insects mating were feeding on flowers.

The near by Red Paper Wasp did not appreciate this and promptly told them to get a room. I even saw a Hornet getting at the flowers, good to see it was busy checking out the flowers and not going after me..lol 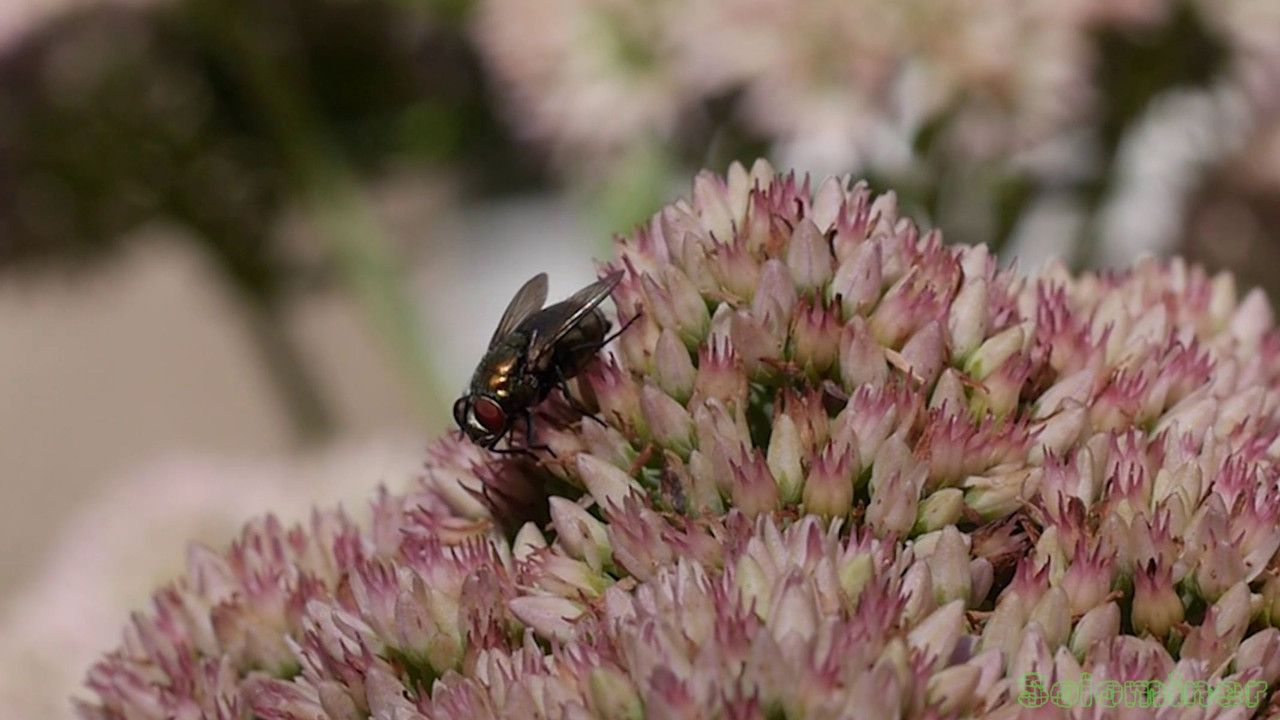 Flies would also visit the flowers, and quickly move when the predators would come close, doubt the Hornet or Wasp would turn down a quick protein meal with its nectar. As the sun went down, many of the insects left. But the Carpenter bees would stick around overnight on the flowers seemingly not moving. And when the sun would hit them again they would warm up and resume their nectar foraging. I found a Yellow-collared Scape Moth feeding on the flowers as well, it would rapidly move its antennae and seemed quite focused on the flowers. One of the larger female Carpenter Bees comes over to feed on a cluster close to my camera and I turn on its close macro setting. I get within a few inches of these bugs, but honestly I am not scared. I learned when insects are feeding on flowers they rarely want to stop and wont mind a non threatening person like me be near them. 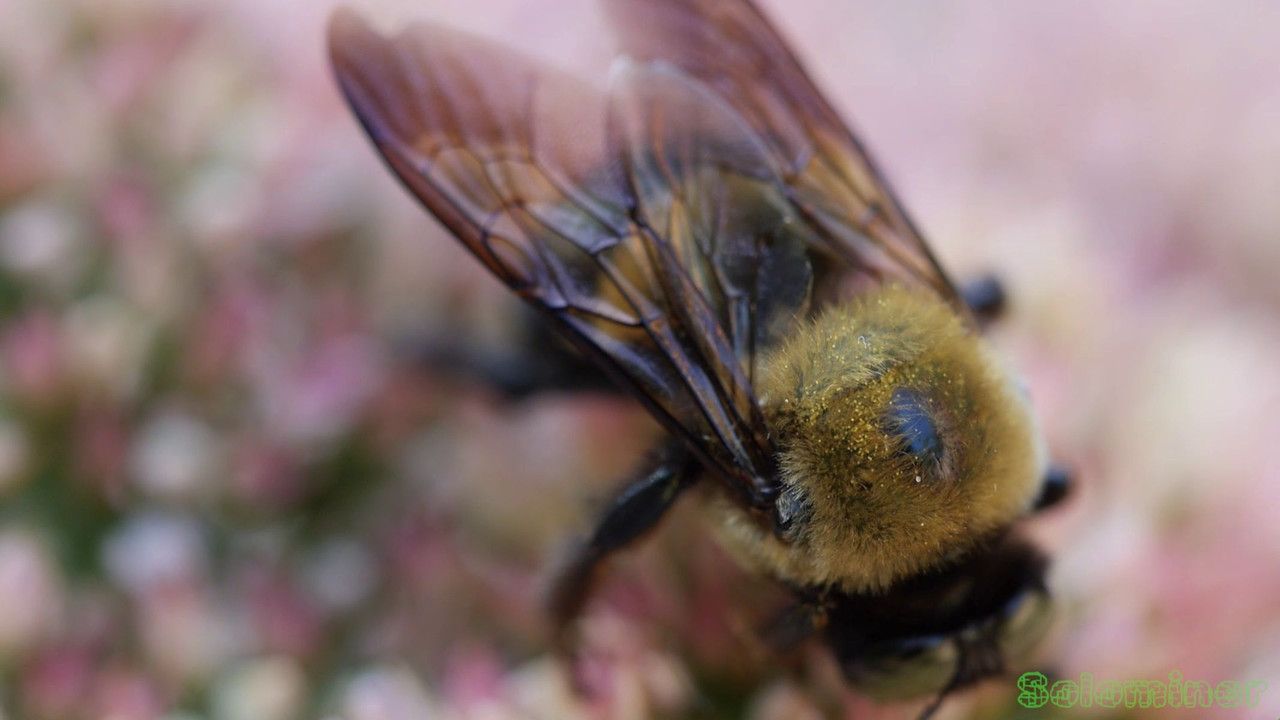 Pollen was on its back side and its iridescent wings. 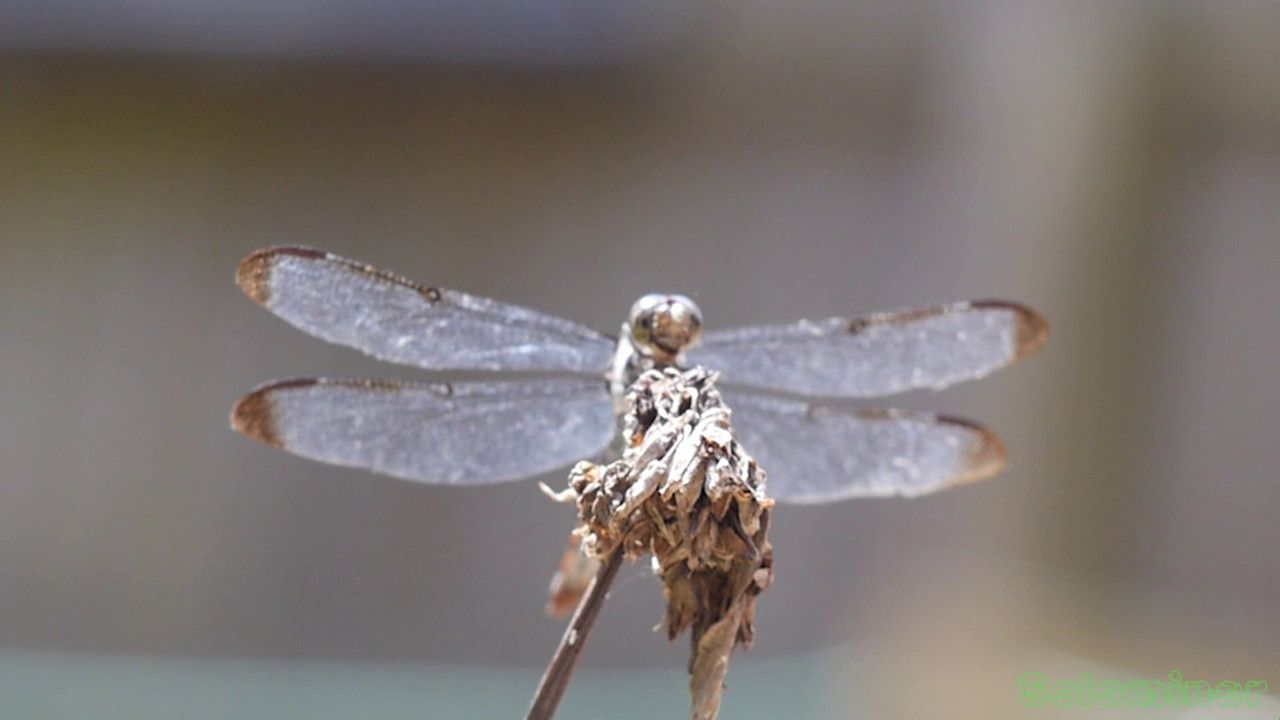 Hanging out on a near by stem, a Dragonfly sat waiting for one of those nectar feeding bugs to fly by too close to it. The Dragonfly would happily eat just about any of those bugs on the flowers. The female Carpenter Bee keeps on feeding on these flowers. Seemingly all day long, though it could be a dozen different ones all spending about an hour each day visiting the flowers. This Moth is pretty special as most Moths are only active at night. It was alot of fun just sitting around watching them as my camera captured some interesting moments. I think I want to grow some more Sedums, maybe different colors. Bringing the camera back a little we can see how clusters of flowers we had this year. It really has grown alot in the last few years. Seems the Mud Daubers having sex have now detached and are both flying around the buds looking for some post sex food. This little butterfly really caught my eye, known as a Grey Hairstreak it has a unique pattern on its back of its wings. It seemed to notice me and turned to face me, it would get a little more spooked than most of the other nectar feeding bugs I saw today. But quite pretty none the less. At one point it jumped to face me, maybe I bumped the flower when focusing the camera.

As it was feeding on the Sedum flowers, it would move its wings back and forth. I did some reading on this insect after I noticed that and learned it does that as a decoy behavior if a near by jumping spider or other prey tries to attack it. The bright colors and notched appearance along with its moving will trick some predators into attacking the wings instead of its head. Giving this little Butterfly a change to escape with its head intact.

I will take some more photos of this plant at full bloom, it really looks amazing. Though the insects may not be in such a feeding frenzy, as by then they may have consumed most of its nectar. And in return many of those insects may have pollenated the flowers giving them a biological reward for their hard work in the form of nectar.

More info on some of the insects shown in this post:

Video note: Since the music is copyrighted and I am now publishing to Youtube. Ads are being forced on the video to pay the copyright owner. I was not given a choice in this as it was required by the platform, so please use an ad blocker if the ads bothers you. I always run ad-blockers and highly suggest others do as well. Ublock Origin is a good one but there are many out there. You can find these plugins at the Chrome store or Firefox store depending on your browser.