What do you think about when you think about Thailand? At some point, the vast majority of people would mention the food. Thai food is very well known and loved all over the world and conjures up images of spicy curries and exotic dishes which in part is correct, but there are also a lot of other ingredients that are a lot more common the world over.

I just thought that today, I'd take a look a closer look at Thai food and the everyday dishes that regular Thais might eat when they go out to eat, whether it be a nice restaurant or simple street food.

Rice, noodles, eggs, pork, chicken, shrimps, fish, cucumber, spring onions (scallions) are all staples and along with chillis and fish sauce, will be found in almost every Thai dish. There are also a lot of regional variations in Thai food with quite distinctive regional variations between the South and North and across to Isan Province and the borders with Laos in the East.

It's the Southern food that is by far the spiciest with an abundance of curries and dishes which rely heavily on Turmeric and other spices and flavourings from neighbouring Malaysia and from Indonesia. A lot of this can again be linked to the predominance of Islam in the region meaning all their food will be Halal.

Up north, generally the food is not so spicy, and noodles are a much bigger part of their diet. There are still curries, but they are much tamer and there will likely be more beef on the menu. Much of the cooking is carried over from the ancient Lanna civilisation and from Chinese traders who would have peddled their wares around the mountainous Northern regions. My wife, although from the South loves Northern food.

Over in Isan, which with the greatest respect is the poorest area of Thailand and extends East out to the Mekong and border with Laos, is where the rice is sticky and there is an abundance of freshwater fish and extremely spicy chillies.

Absolutely...not. Probably due to their natural love of deep-fried chicken, there are KFCs everywhere, as well any number of other fast-food chains and pizza as any trip around a mall will confirm, but almost everything has a Thai twist and even in MacDonalds, there will be rice on the menu.

There is also a big Korean influence with their beloved BBQs and obviously due to the long cultural connection, Chinese too and to a lesser extent, Japanese.

In essence, it's this melting pot of cultures and traditions that has created 'Thai' food.

The thing I notice most is that the local street food and small market restaurants provide you with a more authentic flavour, the cheaper the menu, the more authentic it seems to be and certainly gives you a taste of what the average Thai eats on a daily basis. Cooking at home, especially in the city, is rare due to the heat and the time taken. Often buying ingredients is more expensive than just buying a ready to eat a meal from a vendor on your way home.

The other odd thing is that when you go to one of the many, extremely popular Thai style restaurants, the food is much more expensive, but I find them ever so slightly generic. These types of places are more designed for the social element and the food seems to take a back seat. It's fresh, it's nice, the meat comes from a better cut but it's nothing out of the ordinary.

Anyway, the following photos come from a recent meal we had at a very nice restaurant... This is just an illustration of a 'typical' Thai meal out. Sadly, it would normally be accompanied by copious amounts of ice-cold beer and more than likely, a band or some live music but in these times of lock-downs and prohibition, we just had to make do with the food!

What happens is that everyone has a menu and they all choose the dishes they like. When it arrives, everyone tucks into everything! Whilst eating Thai, this isn't a problem, when we occasionally go out to an Italian, I order my favourites, everybody orders Thai style dishes and then proceed to rob my pizza...so annoying! lol so here is what we had... Now I have absolutely no idea what the dish is called or what species of fish this is. Usually, they are freshwater but I may be wrong! They are always served poached, in a soup and on a spirit burner to keep the soup warm. Fried chicken wings with a side of spicy chilli sauce in the background and to the front, prawns and squid with broccoli in a err....brown sauce. An interesting combination. Deep fried prawns with a taro basket containing melon, grapes and cherry tomatoes. I think those are some kind of fish sticks at the front! 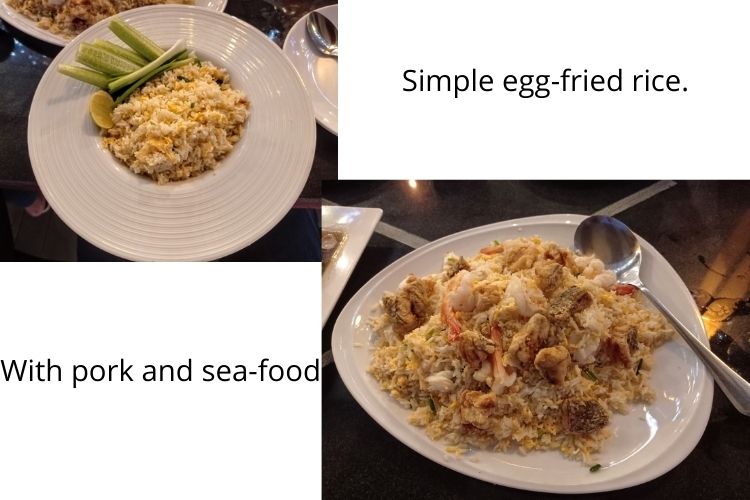 Now one thing I would say is that Thai's don't usually eat a lot of veg. Street food usually comes with a couple of slices of cucumber and a sprinkling if spring-onions, its hardly getting your 5-a-day. In restaurants however, they often come with a plate of vegetables and a bit of 'salad' as a dressing with everything! One thing I have noticed in the last ten years is the rise and rise of brocolli and cauliflower which you'd think was a standard western veg but which now often comes with dishes here. The food was served fresh and hot. One thing I worry about with the restaurants still not having a big throughput is the freshness of the food and wondering if it's been stuck in a fridge or freezer for a while but this was really nice but like I said at the top, a little generic.

The restaurant itself was lovely, sat by the edge of a lake which is itself in the middle of a rather upmarket private village close to Ramkhanheang in Bangkok. Food by water is great, but you have to take precautions to stop you from being eaten yourslef, by the mosquitos! 'X' marks the tables you can't sit at due to social distancing than marking 'the spot' as it normally does! You know I said the restaurant was at the edge of a lake? I meant really, really at the edge. One wrong push of the seats and you're swimming with the fishes! It was just a shed with lots of fairy lights, like many of these places are but when the sun is going down and sting has been taken out of the intense heat, there is nothing better than chilling out over a nice meal by a lake, or river with friends.

Would have been better with a beer though!

OK, that's it. Pinned to @pinmapple. All photos were taken by me and I did use google a little to make sure my information was correct!