This is my contribution to plant power cooking challenge.

I chose from the list of six items, to use eggplant(aubergine)and tomatoes. When I see those items together I think automatically of the Mediterranean.

I think back to when I was introduced to a Mediterranean restaurant that was open really late until 4 a.m. When I was in a band, the boys went there on our way back from Toronto. The first time I was annoyed that we had to stop to eat. When I ate the food I was mesmerized with the taste of everything. I will describe it as lemony and garlicky.

Over the years my friends and I would go there after a night out. At that time I ate meat. I also tried other things.

One appetizer that I loved was eggplant tomato dip. The restaurant called it a salad. I didn't see any resemblance to a salad in this dish that came with pita bread.

I don't know what the ingredients were but I did my best to replicate. It was pretty close. I have a broken element in my oven but the grill still works so I stuck the eggplant under the broiler. After it's roasted the moisture comes out and becomes more meaty. I also remove the skin. I used fresh tomatoes instead of canned because there seem to be plenty in stores now for a good price. Probably from the U.S. We have good tomatoes a little later. I like to dry toast the whole spices until they get aromatic and start crackling. I now love using a mortar and pestle to grind it. My machinery is not the best. I first saute the onions garlic and shallots until they are quite caramelized, then I add all of the spices and continue frying. After they are golden I add the eggplant. Then the herbs and tomato paste. The dish that I had at the restaurant was thick and pasty. It was much like a spread. To get this consistency I simmered until most of the liquid was out. At the restaurant they didn't serve this with tahini sauce but I decided to take it up a notch. I made tahini sauce with sesame paste, lemon juice garlic and olive oil. I made pita bread in a pan from a basic bread dough. I won't bore you with the details as this is about the listed ingredients. 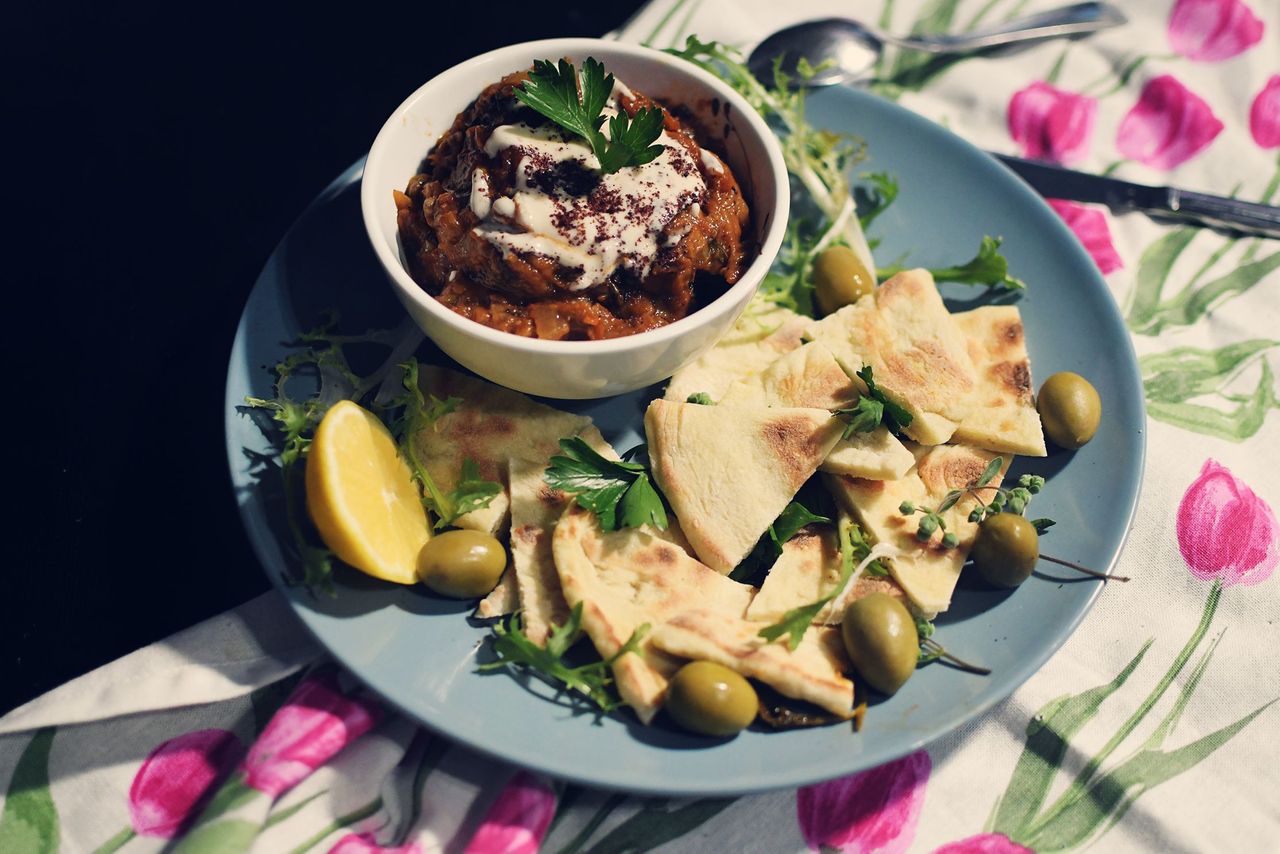 This is the kind of thing I want to have when I am sitting and pecking on snacks, by the Mediterranean sea in my dreams which will probably not happen in this lifetime. Dreams are good though.