Here in British Columbia, 1754 people have died with Covid. That includes suspected (unconfirmed) Covid deaths, deaths where the person had a recent positive test but really died from something else, Covid "vaccine" deaths, seasonal flu deaths, and anything else that gets the number up. Every day, the number is updated and widely broadcast. Society has been completely changed in the past 1.5 years, and the reason for it all was those 1754 deaths. Did it make any sense? I'd like to compare the Covid deaths with the number of deaths due to the opioid crisis, and with the deaths being caused by the nasty North American heat wave currently making headlines.

"BC is on pace in 2021 to shatter last year’s grim record of 1726 drug deaths," notes the Vancouver Sun. Opiates killed as many last year as the entire Covid "pandemic"!

But it's always getting worse. Now, wee're up to 6 people that die EVERY DAY in this province by overdosing on opioids. Some of those deaths could be considered suicides, some might actually be murders, some were because of tainted supply (thanks to prohibition), and others happened by accident. But they're all tragic deaths nonetheless, and in most cases, preventable. The entire Western world has been affected, but BC has been hit particularly hard by this crisis.

We're on pace for more than 2000 deaths - this year alone. And that number could actually be a lot bigger, as there is little incentive to record them all the way there is for recording Covid deaths.

I recently wrote about a terrible heat wave that is not just destroying my garden, but killing a lot of people. BC isn't well prepared for heat waves, so when they happen, they can be really bad. Like snow on the streets in Miami. People aren't set up to handle it, and it causes huge problems, including with people's health.

We're still being baked by this "heat dome", so the numbers won't be in for a while. Also, the media only reports on individual numbers from various towns - they don't add it up and display a grand total. But we can get a general idea.

In Monday, over 100 people died suddenly (almost certainly from the heat) in the city of Vancouver. Tuesday was the peak heat, though, so it was surely worse then. And people will be dying for days to come. They may not all make it to the official tally, of course. And we're told there's a backlog, waiting to be processed by paramedics. Those numbers will have to be added in, too.

Nearby, Burnaby saw 35 deaths early Monday (so we can assume it was more than 35 by the end of the day). Then at least that many more for Tuesday, and again today. Not to mention the weekend, which was also intensely hot. And we're told it could be another 2 weeks before we get a real break from the heat. Across the river, Surrey reported dozens of deaths - just Monday, before the worst of it. Even last week as the heat intensified, ambulance service was stretched so thin, many people called for help but it never arrived, including an elderly woman suffering a serious blood clot due to recently taking a Covid vaccine.

And that's just the lower mainland (greater Vancouver area). The entire province was hit, not just one location! Deaths BC-wide are likely at least twice the number in the Vancouver region. So if we know of hundreds of confirmed heat deaths, and it's at least double that, and it's not over yet, 1000 is my estimate.

Covid has supposedly killed a maximum of 1754 people in 1.5 years.
The opioid crisis will kill at least 2000 people this year alone, and rising.
The heat wave passing through will kill about 1000 people in about one week. 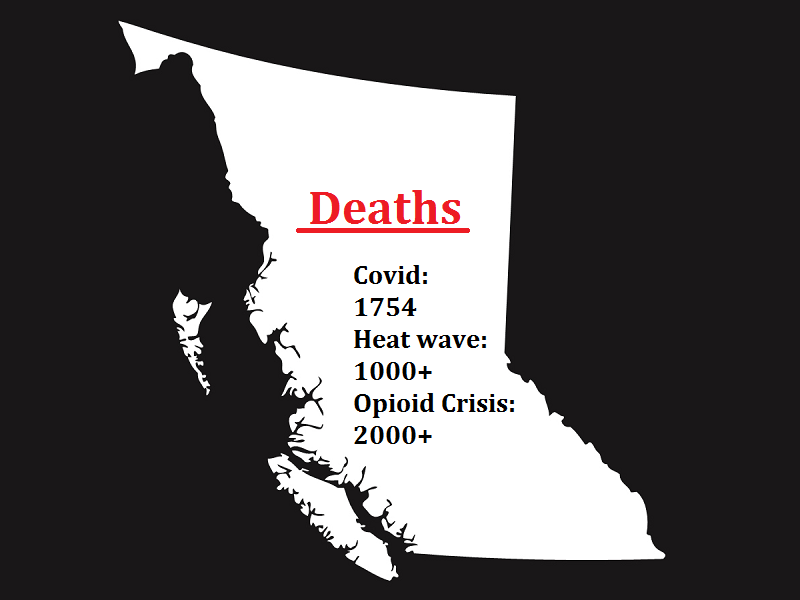 Why are there no calls to increase safety when it comes to heat waves? Couldn't we be more prepared, as a province? I think so. But that's not in the budget, apparently. Shouldn't we improve our infrastructure and policies to handle future heat waves? After all, they're about as deadly as Covid is, and we're changing everything about the whole world for that!

A heat wave kills elderly and disabled, much like Covid. I hear "wear a mask, don't kill grandma" all the time, but not much "everyone should call grandma daily until the heat wave ends, make sure her fan/AC is working, and stop by with some iced tea".

The opioid crisis was partly caused by big pharma, much like Covid was. I don't hear that connection mentioned often, if at all. Big pharma IS the deep state and elite technocrats. They are the real axis of evil.

I wonder... how many of the people who dropped dead in the heat died with a mask on? Masks remain mandatory here until tomorrow. They could have lifted the mask mandate a couple days early, and saved many lives! But they're still enforcing it. I'm watching people walk past my house today, in 44oC heat, fully masked! They're so obedient, they're risking their lives for a technicality. It's lunacy.

As people literally drop like flies from this heat wave - hundreds of deaths per day (far more than Covid ever caused) - there is no state of emergency declared. I've repeatedly spoken out against the permanent state of emergency we've been under for 1.5 years, and it's very interesting to see it finally dropped, today, in the midst of an actual emergency! 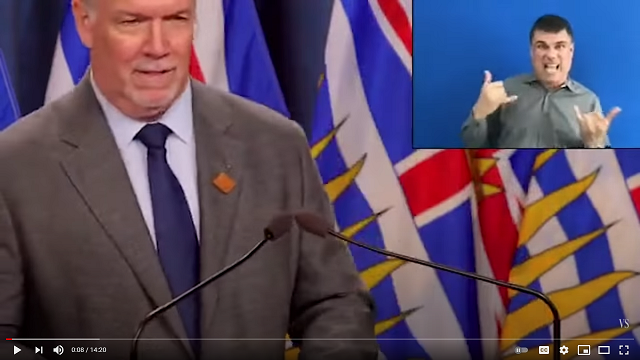 But when it comes to Covid, which has killed a similar number, he was partly responsible for the lockdowns, the closures, the suicides, the masks, the social distancing, the contact tracking, the economic collapse, the permanent changes to society, and so on. And Covid was the excuse for it all. "Because we're in an unprecedented deadly pandemic" was the reason given, time and time and time again.

With Covid deaths, government doesn't say "people die". They say "if we can save ONE LIFE with these vaccines, it's all worth it".

We are undergoing a true emergency right now - while locked down and masked, over a smaller, manufactured emergency. This is what real tragedy looks like.

UPDATE: Just before publishing, a new article was posted by local mainstream news. It confirms the death toll in BC is well into the hundreds. That only accounts for about half the heat wave - it's not over! As I sit here, it's over 40oC at 8pm, my little AC is on full blast but losing the battle, and my place is sweltering. I'm doing what it takes to keep my baby and crippled wife cool, but I can see how a lot of people are in a bad situation right now. Unfortunately, my earlier estimate of 1000 deaths appears conservative. Wow, it's like half of a 9/11 tragedy. Roasting to death essentially in a sauna, not a happy way to go. RIP to the dead and condolences to their families.