I wake up every day and wait to enjoy the silvery sweet notes of the sun birds. The common ones here being the purple rumped sun bird and the purple sunbird. These tiny little birds are up from dawn to dusk collecting nectar and eating tiny insects. This is a purple rumped sunbird, it has bright yellow breasts and reddish black back which looks purple in the sun. These purple rumped sunbirds are more common where I live and they have two breeding season per year. The female sunbirds are rather dowdy looking and smaller than the males. They lay eggs in very intricately made pouches which are commonly woven with fine plant fiber, threads and leaves. Here they have made their nest on a branch of a lime tree and it hangs down very low. They seem to use the same nest for a couple of season and then abandon them or strip the old ones to make new nests. This guy came home a few months ago through the first floor balcony and we had to help him to find his way back to his nest. These birds often get killed as they fly into mirrored surfaces and tinted glass windows. We had to replace ours so they won't fly into them and break their wings or die. These birds are found close to human habitat. The males look stunning as their iridescent metallic colors plumage catch the rays of the sun. They look blue green or purple depending on the angle in which their iridescent plumage catches the light. The purple sunbird looks almost black when it is not in the direct light of the sun. However, you can still see a purple color collar around his neck. These birds are no more than 10cm in size. Above is a female sunbird. 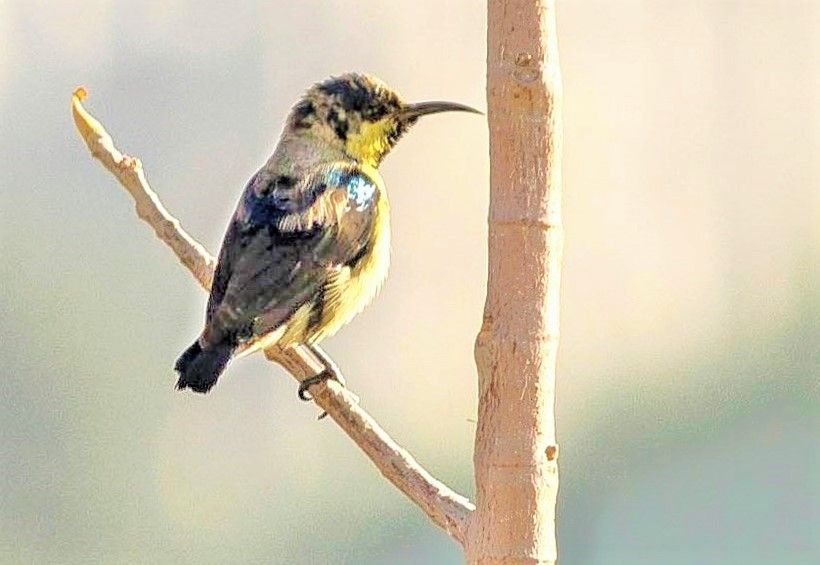 This is a jeuvenile purple rumped sunbird I saw in spring.

Thanks for stopping by.