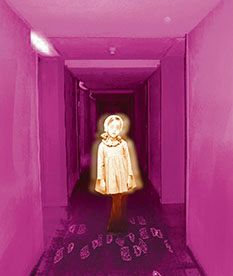 I want to tell you about my nightmare, something that happened to me, taking advantage of the fact that everyone in my family went on a trip I stayed home to rest I put my two dogs in the room so as not to be alone where out of nowhere they began to growl staring at my door fourth I went to see what was happening but before arriving I saw that the plate moved as if someone were trying to open it from the outside, my little animals became restless, they barked nervously and they shrunk their ears a little scared too, I returned to my bed, and I managed to see like a little head was hiding in a corner near my window. With my dogs in my arms I went to the door, but again I could not reach it because a knock like a kick sounded on the door I let myself fall leaning against the wall and I saw a pair of legs across the bed.
At that moment the power went out, I waited until he came back, then we could go out because there were no more knocks on the door, the most unusual thing is that the chairs were watered and others were left over in the dining room, I arranged them to calm myself and accompanied by my dogs, we looked for all over the place we could not find anything I went to the bathroom to wash my face so that the scare would pass, my dogs ran away, when I went after them I went through the dining room and the chairs were again watered, the animals were in the bathroom My parents, behind a child with dirty feet, who was very pale, when he realized I was seeing him, he smiled, and ran right next to me, leaving me with a strong shudder, which took my strength away and I fell faint.
When I woke up I saw in the distance in the dining room a couple of people sitting arguing about something a man got up from the table and hit the woman with force, she screamed as she ran to where I was I wanted to run but in an instant they were in front She asked me for help and the man looked at me strangely, he hit me on the face and I crashed on the ground, when I turned around they were gone, I could only see that pair of white legs of the new one, which belonged to the boy who was laughing and running by the whole place like playing hide and seek, went in and out of the furniture.
I just had to hide with my dogs under the bed until that was over, I never knew who he was or if he had come home because I decided from that moment never to stay alone for several long months because I was very afraid of suffering another injury from the mere fact of hear footsteps when walking.