I was watching some Bitchute videos last night and found myself clicking a link that directed me to a political debate on Twitter regarding Arnold Schwarzenegger's controversial "Screw your freedom" statement to the American people.

Since childhood I was a big fan of Arnold's because of the famous Terminator movies.

Before the SMART tech revolution it was pretty unheard of to claim this "could" be the future if we're not careful. (or something similar with AI anyway..) Most would say "It's just a Sci Fi movie" and jokes about tin foil hats might have ensued..

The purpose of this article is not to outline the possible AI dangers of the future, because we are facing an abolition of freedom of thought, and freedom of choice, and many would agree this is the more prominent threat currently. That's not to say AI doesn't play into this, it certainly does in a technocratic scenario.

You obviously are confusing freedom with stupidity. You have no respect for others safety nor your own. I would hope you are arrested and kept out of civilized society who have no desire to allow your stupidity to kill them.

My responses to this man (who boasted about being a US veteran!) resulted in: 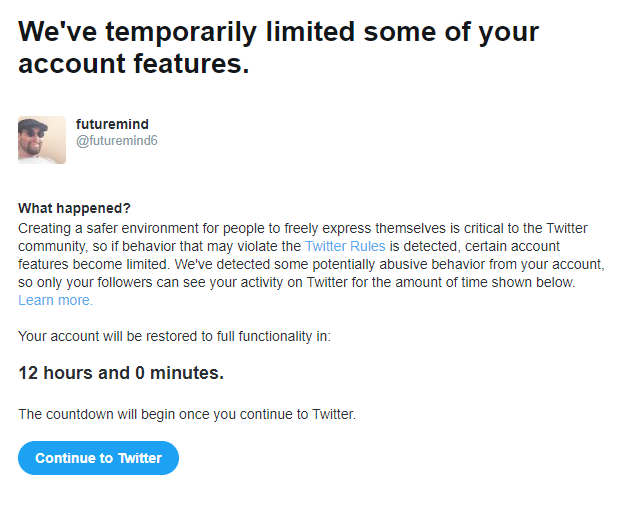 This person slandered my intellect, called me a danger to society, dismissed/ignored nearly every point I tried to make, and while my comments were LIGHTING UP with LIKES, this temp ban happened...

I don't give a fuck about likes, but what I do value is knowing those likes mean MANY people are seeing and AGREEING that freedom is important!

Admittedly once my intellect was attacked, I really let him have it with all kinds of obscenities and counter arguments like:

People like you make me regret serving my country.
Freedom is a farce when idiots believe in tyrannical socialistic propaganda.

And wishing arrest on someone for difference of opinion is NOT FREEDOM YOU FUCKING RETARD. That's TYRANNY. READ THE 1ST AMMENDMENT.

"I have no need to stay at home or fear anything." "I've taken precautions."

Good , then you are protected and safe from dummies, and you should merely laugh at a different perspective because the joke is on you if that vax does not keep you safe from the virus or ''variants.''

"When debate is lost slander becomes the tool of the loser." - Socrates.

“I disapprove of what you say, but I will defend to the death your right to say it.” -Patrick Henry.

Yeah I was a little pissed off and reacted poorly to having my intellect bashed, but I didn't wish death or arrest on him and fully support his right to have an opinion, even if it means his opinion is devoid of freedom!

I just won't let my freedom be threatened by what I consider to be dangerous propaganda.

In other words, anyone who brings this propaganda my way will be met with respect so long as they are respectful and don't try to impose their will on me.

I hold my maskless chin high walking through grocery stores with my good looking mug. I see tons of smiles from ladies under their masks.. The eyes don't lie, ladies like a man who's not afraid ;)

How often am I harassed?
Not often..
and when I am , my response is usually:

"Your fear is not my problem."

"Sorry , what was that? I am having difficulty understanding you while you speak through a dampening piece of fabric and I just can't make out what you are saying, please take off that mask to speak with me or have a nice day, thank you!"

People wearing masks are generally afraid, and they seem to be less of a threat than I initially thought, (physical threat) because no one has tried to put hands on me and most of the time no one says a word to me. I'm not a very big guy but I walk with confidence and have no problem addressing an entire audience with context that may threaten their cozy little belief system(s).

There were a few more words exchanged but I think I've shared enough to communicate the gist of what happened, and his other comments are equally as disgusting in my opinion, but this one takes the cake, because the message is:

If you disagree you should be imprisoned.

We face a serious threat against freedom currently, where the critical thinking skills of the population have been hijacked and replaced with programmed thoughts and slogans designed to imprison them to the whims and orders of their masters.

FEAR is the best method to CONTROL a population, because when a person is extremely afraid, critical thinking is dismantled, and the one(s) afraid will seek SOLUTION to eradicate the fear.
The one's who feed the fear also feed the solution.
This is hegelian dialectic psychology hard at work.

And this method for control is nothing new, but the fuel has been replaced with some high octane rocket fuel..

This is what we were warning about.. and now it's here.

We all play a role.

What role do YOU play?

If you disagree with me, please say so, I'm willing to respectfully debate this, and support everyone's right to have an opinion.

Just don't try to force a needle in my arm, mask onto my face, or arrest me and we will be just fine!

Try that, and one of us will be leaving this world in that moment.

and I do not fear invisible bugs in the air.

Much love, thanks for stopping by! -@futuremind