In this issue we bring you articles and information of great interest in the Steempunkian world, including:

Bumpty-Dumpty's Locomotion Neutralising Pills
When the collywobbles hit, hit back with these.
Remain fresh and alert, even after those long excursions or dodgy meals.
catalogue
This and many more potions, lotions and lubrications can be purchased here. image source
Where all good Steempunkians shop.
An Interview With the Captain Interviewer: So our readers know, what is your name?
Captain: It has been so long since I have been called anything else, I can barely remember the name I was born with. I am simply known now as 'The Captain'. Oftentimes "hey, Captain", or "begging your pardon, Ma'am, but ..." and - rarely, because they disappear soon afterwards - "c'mere, girly".
Interviewer: Are you male or female?
Captain: Do you need me to curtsy? Because I won't ... but I could.
Interviewer: Are you an Aristocrat or an Adventurer?
Captain: Definitely an Adventurer. There is nothing better than flying through the sky in control of a mighty airship. Wind in your teeth and bugs in your hair, as the saying goes.
Interviewer: Why did you become an Adventurer?
Captain: Well, there was this incident back in 2263. I was kidnapped while working in a tavern, and taken aboard an airship because the Captain thought I knew where some treasure was hidden. I grew to like the life, worked my way up ... and here I am.
Interviewer: Have you led a life of hardship or privilege because of that?
Captain: I think I have led a life which has given me more privilege than hardship. I am a Captain now, after all, and so basically my own boss. A privateer's life is a rewarding one wink wink.
Interviewer: Do you have siblings?
Captain: I vaguely remember having to share a bed with several other children, and there were other beds in the room filled with children too, in the tavern my parents ran, so I guess I must have a good number of siblings. But I have not seen them for so many years now I wouldn't know them.
Interviewer: Do you have any pets?
Captain: My crew. I jest, of course. Or do I ... ? wink wink
Interviewer: What do you think of UltimaCorp?
Captain: I have a contract with them, to carry out certain jobs in between the privateering work, so I can not say anything but good things about the company.
Interviewer: How often do you train & what is your training routine?
Captain: In my mind, I am always training. My brain never shuts down. Physically, I train every morning before breakfast. We have some of the latest high-quality pieces of equipment in the airship gym; and while training I like to blast out some motivating music. [begins humming]
Interviewer: What is your favourite weapon?
Captain: Whatever I can take from my enemy. I have a substantial pile of them now.
Interviewer: What snacks & drink would you pack for a battle?
Captain: Rum of course - elixir of the battle-gods. And scroggin, for an energy hit.
Interviewer: What is a piece of advice you would give to new fighters?
Captain: Wash your teeth with rum, it really helps.
Interviewer: What do you eat for breakfast before a big battle?
Captain: When we aren't being served potatoes, I like to fill up on apple pie & ice cream.
Interviewer: Do you have a special 'battle cry' for when you spot your enemy?
Captain: Yes, it's "Come on, let's loot them for all they're worth!" Those aristocrats tremble in fear, I can tell you.
Interviewer: Where do you keep your guns?
Captain: In the UltimaCorp-approved Nimbus 600 Super-Safe Safe, of course, as set out in the regulations handbook. I would never keep them anywhere which wasn't mandated by the Company. N-e-v-e-r.
Interviewer: What colour should the Clockwork Arena be painted?
Captain: I think a nice lavender. Soothing, yet visually appealing while one beats one's enemy battle after battle after battle. Perhaps we could throw in some nice soft pillows, in a silver accent? Lovely.
Interviewer: What do you do for fun?
Captain: I like to knit. I make jerseys for the Society for Prevention of Unnecessary Cruelty to Underprivileged Adventurers.
Interviewer: What is your favourite book?
Captain: "How To Train Your Crewmen (And Women) And Run A Successful Airship". An excellent reference book.
Interviewer: What is your favourite flavour ice-cream?
Captain: You expect me to say 'rum & raisin' don't you? Well it's not. My favourite is Goody-Goody Gumdrop. A sophisticated, yet playful flavour. Let no-one tell you otherwise!
Interviewer: If you were allowed into the laboratory, what would you create?
Captain: Hmm, I'm not sure. An automated apple pie & ice cream dispenser, maybe?
Interviewer: Do you have any allergies? Annoying habits?
Captain: I bite my nails. And I like to sing.
Interviewer: Do you have a special talent?
Captain: Not one I am prepared to brag about.
Interviewer: What are your dreams for the future?
Captain: To have a fleet of airships, with a great crew so that I might have more time to knit jerseys. At some point I may wish to have a family.
Interviewer: Anything you wish to add for our readers at home … ?
Captain: A captain is only as good as her crew, and so I'd like to give a hearty cheer to my airship companions - Lieutenant @oendertuerk, and Cadets @k3lda, @justatouchfey and @eddiespino. As WolfGuards we will rule the skies, and there will be extra rum in your paypackets this month!

We thank The Captain for an enlightening interview.

Further information from the handbook on A Steempunknet Weapons Portrait, written by @lennstarr which we found in the archives; we would like to remind our readers of the usefulness of these gems.
Here is an excerpt from his book, regarding Finn's Sniper Rifle: Next, we would like to offer further book recommendations, for the keen Steempunk enthusiast.
(Information gathered from Goodreads.) A charmingly gothic, fiendishly funny Faustian tale about a brilliant scientist who makes a deal with the Devil, twice.
Johannes Cabal sold his soul years ago in order to learn the laws of necromancy. Now he wants it back. Amused and slightly bored, Satan proposes a little wager: Johannes has to persuade one hundred people to sign over their souls or he will be damned forever. This time for real. Accepting the bargain, Jonathan is given one calendar year and a traveling carnival to complete his task. With little time to waste, Johannes raises a motley crew from the dead and enlists his brother, Horst, a charismatic vampire to help him run his nefarious road show, resulting in mayhem at every turn.
source

The Aeronaut's Windlass (The Cinder Spires #1)
by Jim Butcher Since time immemorial, the Spires have sheltered humanity, towering for miles over the mist-shrouded surface of the world. Within their halls, aristocratic houses have ruled for generations, developing scientific marvels, fostering trade alliances, and building fleets of airships to keep the peace.
Captain Grimm commands the merchant ship, Predator. Fiercely loyal to Spire Albion, he has taken their side in the cold war with Spire Aurora, disrupting the enemy’s shipping lines by attacking their cargo vessels. But when the Predator is severely damaged in combat, leaving captain and crew grounded, Grimm is offered a proposition from the Spirearch of Albion—to join a team of agents on a vital mission in exchange for fully restoring Predator to its fighting glory.
And even as Grimm undertakes this dangerous task, he will learn that the conflict between the Spires is merely a premonition of things to come. Humanity’s ancient enemy, silent for more than ten thousand years, has begun to stir once more. And death will follow in its wake…
source Alchemy: the mystical power to alter the natural world; something between magic, art and science. When two brothers, Edward and Alphonse Elric, dabbled in this power to grant their dearest wish, one of them lost an arm and a leg...and the other became nothing but a soul locked into a body of living steel. Now Edward is an agent of the government, a slave of the military-alchemical complex, using his unique powers to obey orders...even to kill. Except his powers aren't unique. The world has been ravaged by the abuse of alchemy. And in pursuit of the ultimate alchemical treasure, the Philosopher's Stone, their enemies are even more ruthless than they are...
source

The next best thing to doing steampunk, is reading steampunk!
How To Steampunk IRL - guides, tips & tricks for the discerning fan.
Steampunk your house!
Impress your friends and random visitors with some innovative ideas. 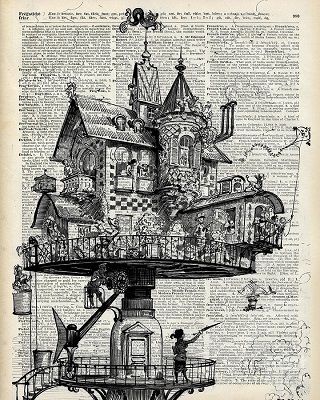 image source
Junk shops and garage sales can be a treasure trove of steampunkian delights!
Make sure to keep a look out for simple things to turn into wondrous projects.
Each edition we will endeavour to bring you easy and inexpensive ideas to try out for yourselves.

Add a touch of steampunky flair to any room with this simple and easy-to-make side table. source
One of the best things about it is that it uses simple recycled materials - an old suitcase and a folding chair frame.
(If you do make one for yourself, we'd love to see it - post a photo in the comments section below.)
And an even simpler idea would be if you found an old trunk. Use it, as is, as your new coffee table. image source
Finally, we would like to finish with a little music.
In this edition we have chosen The Extraordinary Contraptions's catchy Prelude to the Nocturnis. They hail from Atlanta (Georgia), USA. Source
an awesome MMORPG blockchain game you can play simply by doing the things you normally do on Steemit; and it doesn't matter what your rep level is, everyone has an equal chance of winning battles and collecting loot.
So if you want to know more about the project and maybe joining a Guild for extra fun and support, enter the

server, follow the welcome guides, and get your game on.
You can battle your friends, or find new opponents to annihilate in the Clockwork Arena.