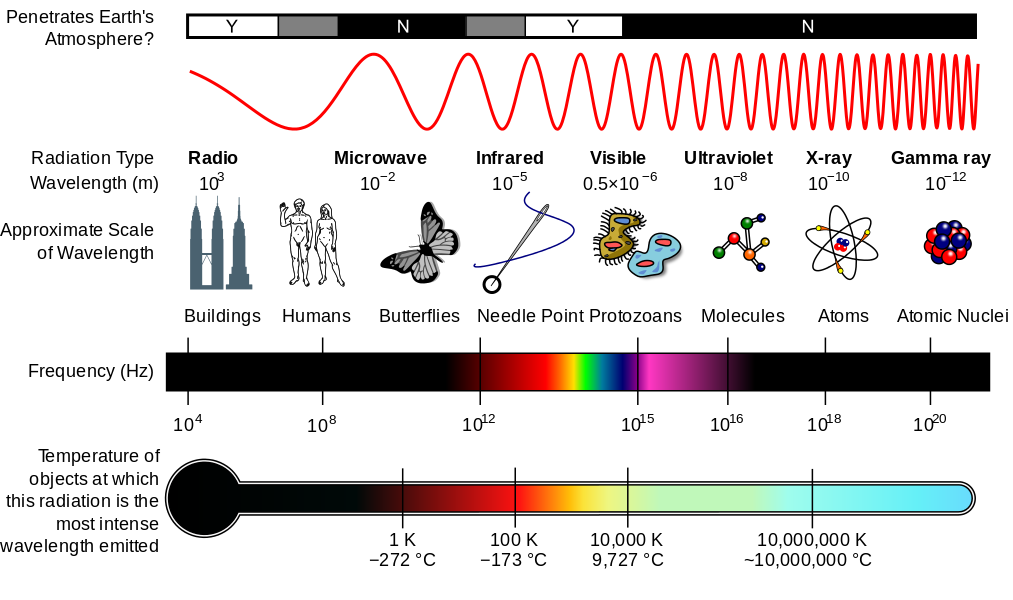 Hello it's a me again Drifter Programming! Today we continue with Electromagnetism to talk about the Electromagnetic Spectrum! So, without further do, let's get straight into it!

The Electromagnetic Spectrum (EMS) is the known range of electromagnetic radiation, where we distribute this radiation according to frequency or wavelength. We know that all electromagnetic waves travel at the speed of light inside of a vacuum, but still they have a wide range of frequencies, wavelenghts and photon energies, that separate them from each other. EMS consists of many subranges or portions, such as visible light or ultraviolet radiation. These portions have different names that are based on their differences in behaviour of emission, transmission and absorption, and are also based on their practical applications. There are no precisely accepted/defined boundaries. The contiguous/contacting portions even tend to overlap.

The entire EMS, from the lowest to the highest frequency (or from the longest to the shortest wavelength), includes all radio waves, infrared radiation, visible light, ultraviolet radiation, X-rays and gamma rays. Most of the frequencies and wavelengths can be used for Spectroscopy, which is the study of absorption and emissioin of light and other radiation by matter, mainly used in Astronomy (we will get back to that later on!).

So, let's get into these kinds/portions of radiation more in-depth, without an actual order...

Our eyes are limited to see only one part of the electromagnetic spectrum, the colorful rainbow, that we call visible light. Visible light is a form of energy, like radio waves, microwaves etc., which is also made up of EM waves. Starting from the lowest frequency and longest wavelength that our eyes can register, the visible light spectrum starts from red, goes through orange, yellow, green, blue, indigo and lastly violet, which is the highest frequency and shortest wavelength that we can see.

The visible light covers a range of:

Radio waves cover a huge band/range of frequencies and wavelengths. Any electromagnetic wave that is longer than a microwave is essentialy called a radio wave, meaning that the wavelengths vary from tens of sentimeters for high-frequency radio waves up to hundreds of meters for low-frequency ones. The typical size of this waves that we use to tune into radio stations, watch TV and that are also emitted by stars and gases in space, is therefore in the range:

where the '+' and '-' symbolize that the radio wave spectrum continues even further...

Microwaves are essentially short-wavelength radio waves that are obviously used for cooking in microwave ovens, but also in radar equipment. The "actual" range of wavelengths and frequencies that we call microwaves is:

where the '+' and '-' symbolize that the microwave spectrum overlaps with the radio wave spectrum (you can already see that the portions have no exact boundaries).

The light just beyond the reddest light, with a slightly shorter frequency is being called infrared. This invisible "hot light" is warming our skin and is what we think of as radiated heat. Night vision googles pick up the emission of infrared light by our skin and objects with heat and let us see in night. Infrared is "defined" in the region:

Ultraviolet (UV) is the blue-ish light just beyond the highest-frequency violet light that we can see with our plain eyes.  The Sun transmits powerful ultraviolet radiation that we can't see, but it's what get's us sunburned when swimming in the sea (even on cloudy days!), which is why sunscreen is so important. UV radiation is also being emitted by "hot" space objects. The range of UV is:

A very useful type of high-energy wave widely used in medicine and security is the so called X-ray. The EM waves that we call X-rays are in the range:

Gamma rays are the most energetic and dangerous form of EM wave. These waves are a harmful type of radiation that have some medical use. Gamma rays are all the waves that have a frequency higher than gamma rays and a wavelength shorter then them. This shows us that they are defined as:

After a wavelength that is shorter then 1fm the gamma rays is then being called a Hard gamma-ray, which is even more dangerous!

One last thing worth noting about these types is that all these types are not completely different things. There are different ways of producing and detecting them, but essentially all of them are Electromagnetic waves that just have a different amount of energy. As light is a form of electromagnetic wave, we tend to describe the EMS based on light. That way we can say that radio waves have photons with low energies, whilst gammar-rays consist one the most energetic photons. The energy of a photon is defined as E = hf, where h is Planck's constant!

Most electromagnetic radiation from space is unable of reaching the surface of the Earth. Only Radio frequencies, visible light and some ultraviolet light get's to sea level. To observe infrared light we put telescopes on mountain tops, use balloons or even Rocket flights. For long-term observations the best detector is of course a orbitting satellite or a moving space-telescope like Hubble (or it's replacement "James Webb"). So, how can Astronomers use this light for research purposes? Astronomers can use the entire EMS to observe lots and lots of things.

Let's get into each kind...

Radio waves and microwaves can be used to peer inside dense interstellar clouds and track the motion of cold, dark gas. Radio telescopes have been used to map the structure of our galaxy, while microwave telescopes are sensitive to the remnant glow of the Big Bang.

Infrared telescopes/detectors can be used to find cool, diming stars, slicing through interstellar dust bands. They can even be used to measure the temperature of planets in our or other solar systems. All this because the wavelength of infrared light is long enough to navigate through clouds that would otherwise block our view. Using large infrared telescopes we were able to take a look through the dust lanes of the Milky Way into the core of our galaxy.

The majority of stars emits most of their EM energy as visible light. Because the wavelength (and frequency) correlate with energy, the color of a star can tell us how hot or how cool it is. Red stars are the coolest, while blue are the hottest (yes this seems weird, as red is mostly thinked as hot). The coldest stars emit a light that is hardly visible and can only be seen with infrared telescopes.

Using UV light astronomers can hunt out for the most energetic stars and identify regions of star birth. When viewing at distant galaxies with UV telescopes, most of the stars and gas disappers, leaving only stellar nurseries.

The atmosphere of our planet blocks this kind of light, which means that astronomers must use telescopes in space to see the X-ray and gamma ray universe. X-rays come from exotic neutron stars, the vortex of superheated material spiraling around a black hole, or diffuse clouds of gas in galactic clusters that are heated to many millions of degrees. Gamma rays unveil violent supernove explosions,  osmic radioactive decay, and even the destruction of antimatter. The most energetic singular events in the universe are the so called "Gamma ray bursts", which are a brief flickering of gamma ray light from distant galaxies that occurs when a star explodes and creates a black hole.

To sum up, astronomers can use telescopes that are sensitive to different wavelength ranges of the EMS to take a look into a wide variety of objects and phenomena in the universe!

Here we only have the previous two "chapters" and the current one!

And this is actually it for today's post and I hope that you enjoyed this topic! Next time we will get into the final topic of Electromagnetic waves and Electromagnetism in general, which is Antenna/Radiation patterns. After that we will again do some exercises/examples around EM waves, and lastly I will also make a "All about Electromagnetism" article that will consist of all that we talked about in Electromagnetism!