Melktert when translated to English is Milk tart. Stouts came in many guises and this one sounded ok to me, and I wanted to try it out!!

It has an old lady on the can, I presume the baker of the Milk Tart. (In South Africa we have rusks, called Ouma Beskuit, which means Grandma Rusks, with a similar looking lady on the package.)

They say it is an easy drinking Milk Stout, infused with Vanilla and Cinnamon and carbonated with Nitrogen to enhance the creamy head. They further say the beer is not overly sweet. 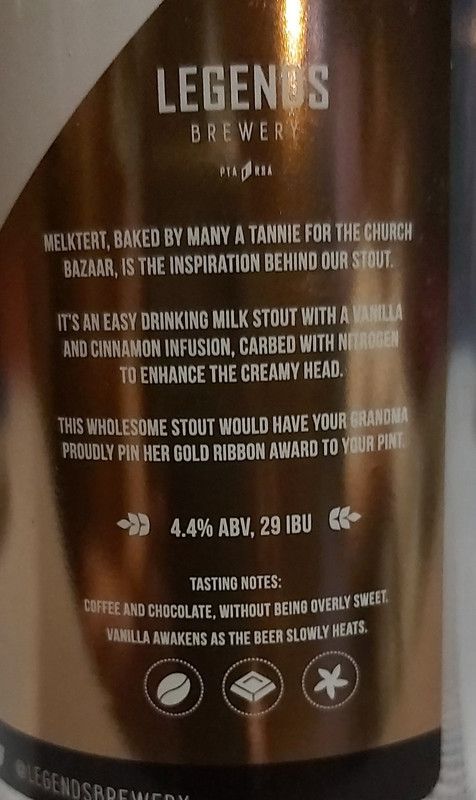 This beer poured pitch black, with almost no head!! I wonder what the head would look like if they did not use Nitrogen to enhance it, to me the Nitrogen was a complete failure!!

Let us get to the taste!! I did not taste cinnamon, I might have tasted some vanilla, but the beer definitely tasted sweet - completely different from what the label stated!!

I normally love a good stout, but to me this beer is a complete failure, which is a pity, as previous beers from the same brewery was quite good!!

I suppose some you win and some you loose - better luck next time!!

I hope you liked the post as much as I liked writing it.

I hope you have a wonderful day!!