I have mentioned several times before that I don't think that this resurgence is real because the Prime Minister has been looking for a reason to quell the protests against him for quite some time and all the other orders he instituted did not work...as in, the protesters continued to protest and actually grew in number whenever he or the police attempted to disperse them.

I feel as though this new tactic of banning gatherings is a "divide and conquer" strategy because other than the much smaller group of counter-protestors, nobody really was bothered by the people having problems with the government and public opinion was actually leaning to the side of a majority of people also being dissatisfied with the current government leadership.

So now Covid has apparently been reintroduced into Thailand and as usual, it is being blamed on Myanmar even though it was Thai people that are meant to have snuck back into the country without going through quarantine. Sure they did sneak in FROM Myanmar, but this fact doesn't make it the fault of the Burmese. Since the people who allegedly brought it back in have been shrouded in secrecy "for their own protection," I kind of doubt that it ever even happened. 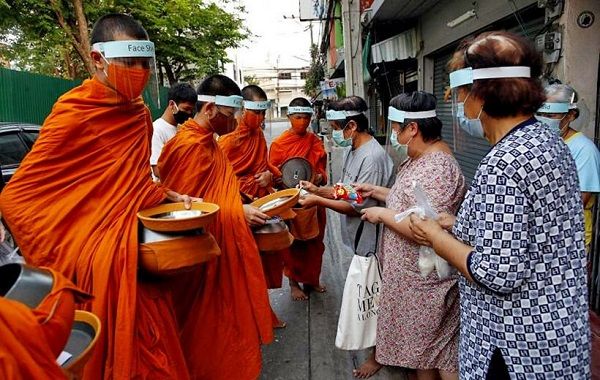 People here, just like everywhere else in the world, are sick and tired of Covid restrictions and while it hasn't happened yet I am willing to bet that as more and more restrictions are introduced that the official reasons for the increase in restrictions as they spread all over the country, will be blamed on the fact that the protestors wont go home and get out of the streets. The Prime Minister realizes that he can not win over the people by his own virtues, so perhaps he is going to vilify the protestors to make the people dislike them more than they dislike him. Make people dependent on the govt

I would like to believe that his actions are genuinely in the best interests of the people but his track record doesn't exactly indicate that this would be the case... plus he is a politician that took his office initially by force, so this doesn't exactly instill a great deal of confidence in him on my part.

Schools have been shut in the "red zones" which conveniently includes all the major places where the protests have been largest. Also affected are "food handouts" which just mean the poor aren't going to be receiving free food from charities. The only places that this can now take place is in specified quarantine areas and guess who is in charge of these places? That's right! The government is! So now the reason why the poor are getting food is not going to be because of the generosity of private institutions, it will be because the glorious and generous government administration is giving it to you!

Turn the people against one another

Shopping centers are still allowed to be open but only under strict disease control measures: This is suspect for a number of reasons. The first reason is that the people that own these properties are ultra-wealthy and therefore probably are pals with the PM and have influence in the government - we can't have rich people losing money because of this can we? The second reason is that by allowing these places to be open, but also by removing all of the fun from them the people may follow along and decide to resent to protesters, just like I feel the plan was all along.

For the time being, dine-in restaurants are still allowed to operate but I would guess that we are only a couple more protests away from this being disallowed as well. Furthermore, the strict regulations as far as "cleanliness" and distancing is concerned is something that mom and pop shops and street stall, let alone market operators, will be incapable of adhering to so yet again, we have the poor being targeted and will most likely be used as a tool to combat the protestors. The PM will tell these poor restaurant operators that the reason they can not open is because the privileged, mostly college student-aged protestors are the reason they can't open and the people will respond in turn by hating the protestors.

The media is also already closely controlled by the government, so it will be very easy for them to sow the seeds of derision between the lower class and the middle class / students - who are the ones that are the primary members of the protest movement. As crazy as this sounds to me, people have been arrested and charged for spreading "propaganda against the government" and "covid misinformation" on social media in this country.

I would love to believe that the reason why this is being rolled out in phases is because the government actually has a plan and the plan is solely based on attacking Covid. However, it is difficult for me to think that way based on what I know about this country and government in general. Plus the timing of this particular leader's popularity (or more specifically, the lack of popularity) and the ever-growing protests against him are just a bit too convenient. The fact that they are once again blaming everything on the Burmese is just another trick the Thai government pulls on a regular basis.