A Little More on Moore

Henry Moore is one of the most iconic sculptors of the 20th century, but we, his avid fans, often forget to look at his creations outside of bronze. In fact, we can find Moore’s iconic reclining silhouette first emerge in a series of over 300 pieces dubbed “Shelter Drawings,” produced during the air raids in London between late autumn 1940 and summer 1941.

Moore’s obsession with capturing the languished forms of those hiding from the Blitz began innocuously. According to the story, Moore’s car broke down one evening, forcing he and his wife to take the London Underground. As they were returning for the evening, an air raid began. Moore was struck by the people huddled for shelter by the train. He described the scene:

We stayed there for an hour and I was fascinated by the sight of people camping out deep under the ground…. And there were intimate touches. Children fast asleep, with trains roaring past only a couple of yards away. People who were obviously strangers to one another forming tight little intimate groups. They were cut off from what was happening above, but they were aware of it. There was tension in the air. 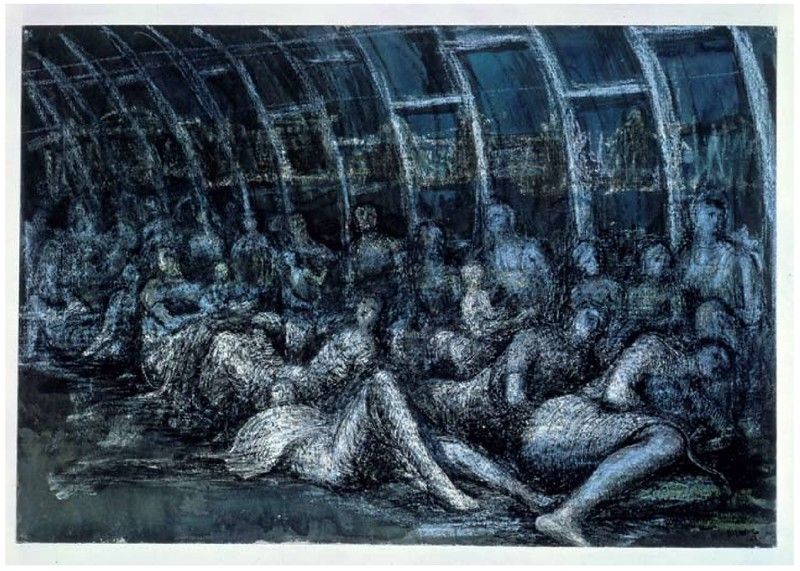 Moore perfectly captured this tension and intimacy in Shelterers in the Tube, a prime example of how his sculptural identity translates to paper.The drastic left-leaning perspective, driving the viewer’s eye toward the darkness of the tunnel creates the illusion of a never-ending crowd. Moore enhances this sense with the strong horizontal and curved lines that form the tunnel itself. This rigidity is contrasted by the organic and non-uniform nature of the figures themselves. Each one represents a different pose, some facing the viewer while others turn away. The lightest figure in the center, with one leg bent, and the figure holding what appears to be a baby or small child in the lower right corner particularly reflect the subject matter of his later work, exploring the languid figure and the interaction between mothers and children.

Though I found the medium of this sketch bizzare at first, the use of graphite, ink, watercolor and crayon is very typical of Moore’s Shelter Drawings. Moore commonly employed the wax resist technique, using the white crayon to preserve the brightest areas before using an ink or watercolor wash. This technique allows for the sharp chiaroscuro (contrast between light and dark) clearly visible in this piece. The wax also allows Moore to play with texture. In-keeping with his sculptural instincts, Moore reportedly likes the “thickness” the wax created and the leeway it gave him to produce both rough and smooth textures in his figures. He used colored pencils, chack and gouache (a delicate watercolor type paint) in his other sketches.

These drawings were not only inspired by the effects of the war on Britain, but were used by the UK government to raise money for the war effort. As the war and resultant lack of metal for his sculpture limited his income, Moore began selling his shelter sketches to the War Artists Advisory Committee (WAAC) run by the British Ministry of Information in 1940. The WAAC ultimately purchased 31 of his sketches, taking them around the world in the fundraising, traveling exhibition Britain at War. The faceless nature of Moore’s figures created universally relatable images of the suffering caused by the war. They were seen as illustrations of British unity in the face of the German onslaught. Other British artists such as the cartoonist Fougasse also worked with the government, helping the war effort with their art. They raised significant money redirected to the war efforts in continental Europe. 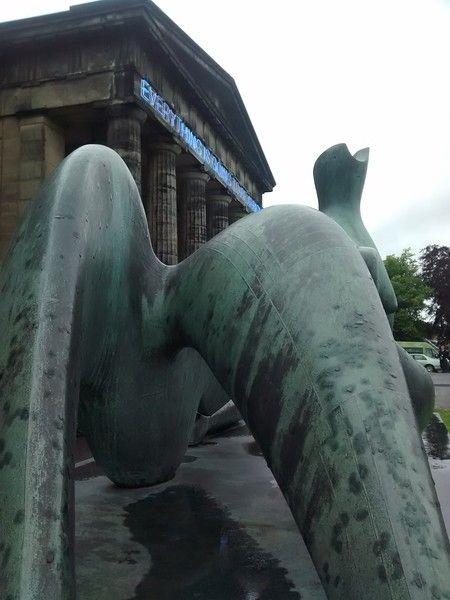 Moore’s Shelter Drawings provide an incredible insight into his later sculptural works. They are also a great illustration of how environment and historical context can mold an artist’s work and how that work can in turn help to influence historical events. I encourage you to look into his other shelter sketches. If you are ever in the UK, his First Shelter Sketchbook is currently held at the British Museum while the Second Shelter Sketchbook is in the Henry Moore Foundation collection. I love Moore’s work in the 2 and 3D, so researching him has been fascinating! I hope you have found this information as cool as I have.

If you are interested and want more info, this is the link to a document all about Moore and his work produced by the Tate Museum in London (where Shelterers in the Tube is currently housed): Link.

I had the pleasure of taking this photo outside the Scottish National Gallery of Modern Art in Edinburgh. The way the legs of the figure curve really reminds me of the central figure in Shelterers in the Tube. 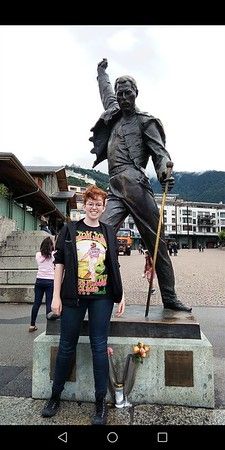 Hi everyone! My name is Frankie O'Neill and I'm an undergraduate student at Arizona State University, studying Business (Global Politics and Art History).

My mom is an artist and I've always been surrounded by massive art books. Some of my earliest memories are of flicking through plates of Dega and Monet (not that I knew who they were until I was much older!)

A big thanks to Frankie for the awesome information on Henry Moore, his sketches, a look at his work and London during the war, and being our first Guest Blogger.

If you have a passion for art and would like to see me cover a specific topic, artist or piece of art work or if you would like to be a guest blogger, like Frankie, let me know. I love the idea of Steem being a worldwide platform and being able to share and learn from each other.